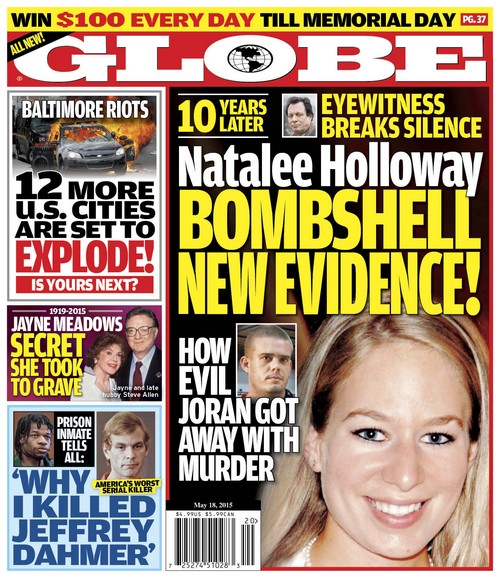 Natalee Holloway’s disappearance and murder has haunted the world and media since 2005. The messy investigation in to the 18 year old’s disappearance and death dealt by the hands of Aruba native Joran van der Sloot was even turned into a made-for-TV movie. Although Natalee’s body was never actually found – the investigation went on for several years and Joran was arrested on more than one occasion and then released due to lack of evidence. According to a new report – some evidence has been uncovered that could finally lead to justice for Natalee Holloway and her family.

The May 18 cover of GLOBE Magazine features the familiar high-school photo of Natalee Holloway that we have seen plastered on the news over the past ten years. The headline reveals, “Natalee Holloway Bombshell Evidence: 10 Years Later Eyewitness Breaks Silence.” The GLOBE cover also includes a photo of killer Joran van der Sloot and teases an in-depth story on “how he got away with murder.” If you followed Natalee’s case over the years – then you have to pick up a copy of GLOBE this week as soon as it hits newsstands!

Speaking of high-profile murders, GLOBE managed to score some inside information on the prison inmate who murdered serial killer Jeffrey Dahmer behind bars. In other news, our friends at GLOBE Magazine always stay abreast on current news and the May 18 edition also features an inside story on the riots in Baltimore – and a list of other cities in the United States that will soon suffer the same fate. In celebrity news, iconic actress Jayne Meadows sadly passed away in April 2015 – and GLOBE uncovered a bombshell secret the 95 year old tried to take to her grave.

Have you followed the Natalee Holloway case over the past decade? What do you think the eyewitness that has come forward has to say? Will we finally know what happened to Holloway in Aruba back in 2005? Let us know what you think in the comments below and don’t forget to pick up this week’s edition of GLOBE Magazine as soon as it hits newsstands.