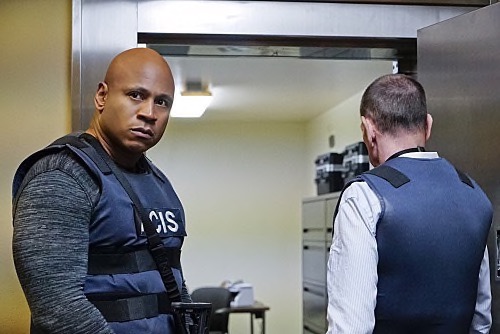 Tonight on CBS NCIS: Los Angeles continues with an all new Monday April 13, season 6 episode 20 called, “Rage,” and we have your weekly recap below. On tonight’s episode, Callen [Chris O’Donnell] and Sam [LL Cool J] work undercover as a prisoner and guard to infiltrate a white supremacy group believed to be in possession of stolen nuclear material.

On the last episode, the team investigatd when a missile test was hijacked and the missile was sent off course. Hetty brought in a young computer specialist to assist in the probe, but Nell became jealous when the tech guru and Eric started to bond.

On tonight’s episode as per the CBS synopsis, “Callen and Sam work undercover as a prisoner and guard to infiltrate a white supremacy group believed to be in possession of stolen nuclear material. Kensi transforms herself into a tattooed biker chick to play Callen’s girlfriend. Meanwhile, Callen’s first meeting with Hetty is revealed.”

Callen unfortunately found himself on the wrong side of the law on tonight’s all new episode Of NCIS: LA”. Though don’t worry. It was all for a good cause.

Apparently, an old group that Callen had previously infiltrated had ended up back on the fed’s radar. The Aryan Supreme Alliance had been recently suspected of stealing nuclear material. And though known to create explosives – stealing nuclear material meant the Aryan had something big planned. So with Callen already having friends on inside of the organization, his team was forced to send him back in. And by in – that meant prison. Oakville Prison.

See, last anyone from the alliance had heard or seen Callen; he was being put into solitaire for jumping a black guard. So in order to find out what a racist group was planning on doing with such a bomb – he had to reacquaint them on the inside. Then he had to do something that went against every cop’s moral instinct – he had to help them break out of prison.

Though the group has garnered interest, its leader was on the outside. It seems had been freed not long after Callen got “sent away”. So Callen needed someone to take him to Dallas. And if necessary, lay out some groundwork.

So, after they staged a breakout and met up with the other brothers, Callen needed backup. And luckily it came in the form of Kensi. Kensi pretended to be his biker chick and for a while their cover was safe. But then the Aryan surprised them all.

Instead of asking Callen for his help in building a bomb, they asked him to rob a bank. And sadly that’s something the team was no not planning on.

They were able to move fast and to arrange things so that no one got hurt during the robbery. However Callen showed his hand. It seems he had grown attached to one of the younger guys in the group and though he didn’t anything of it – he left himself too open as he was trying to convince the other man to leave this life behind.

So eventually Callen was betrayed!

Charlie told the other guys about the way Callen had been acting. So right away Dallas had his suspicious. And sadly those feeling only intensified when he noticed all the odd behavior. For instance there was no mention of the feds being at the scene when the news was going over events.

Hence, Dallas ended arriving very quickly at the idea that Callen must have been plant. Either someone the cops were hoping they could use to bring him down or just a cop himself. And so, because Dallas needed to answers, he began questioning Callen over several long hours. With the occasional torture thrown in.

Meanwhile Callen’s friends had no idea where he was or if he was safe. Thus they had to find Dallas’s hideout even though the leader of alliance didn’t even bother tell his followers or his wife any of his plans.

Kensi first started in on the wife. To go off of their rapport from earlier, she confessed to being an agent and then she told the other woman that no good could come from supporting Dallas in this. Other women have taken this road and they’re all in jail. So she got the woman talking but it was poor luck that she didn’t know much.

All she did know was how long did it take for Dallas to travel home after he had been out by his hideout.

So that gave the team some sort of time to use a reference. And that information coupled with what Sam had learned from an Aryan brother ultimately helped the team figure out where Sam was being held. But infiltrating the abandon warehouse to recuse their friend was a problem. The mission was not going to be easy. They knew the other guys could outweapon them. Yet, and most importantly, they couldn’t come blazing in with a task force else they risked Callen’s life.

They had to move slow and there couldn’t be a lot of faces. However not a lot faces ended up leaving the building in once piece.

Despite their best wishes, there was a shoot-out and Charlie who had earlier turned on Callen had somehow had a change of heart in the middle of it. But unfortunately he was never given a chance to walk away from the brotherhood. A federal agent had shot him and later he died in Callen’s arms.

Though, the young man’s death cut him deeply. It seems he saw himself in Charlie, before Hetty had saved him that is. So he had wanted to give Charlie the same opportunities that he got in life. And now that’s never going to happen.

Charlie died and the brotherhood died not long after.