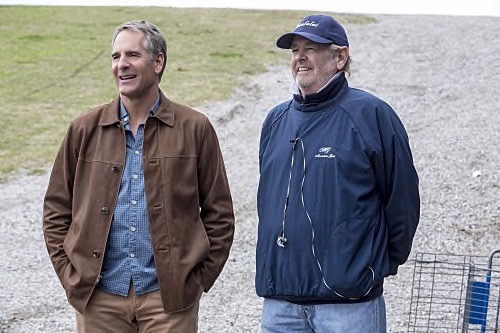 Tonight on CBS NCIS: New Orleans returns with an all new Tuesday March 24, season 1 episode 18 called, “The List,” and we have your weekly recap below. On tonight’s episode, a sailor is killed in a strip club and the murder weapon is linked to two other unsolved homicides.

On the last episode a Navy recruiter was killed when she became the target of a deadly hit and run. The investigation focused on whether the murder was linked to her career or her role as a foster mother to two brothers. Meanwhile, Lasalle grew increasingly concerned for his brother’s welfare after welcoming him into his home.

On tonight’s episode as per the CBS synopsis, “a sailor is killed in a strip club and the murder weapon is linked to two other unsolved homicides. In addition, the investigation reveals that the names of the three victims appear on a mural in a dilapidated part of town. Meanwhile, Brody’s ex-fiancé pays her a surprise visit.”

A Navy officer was found murdered inside of a strip club on tonight’s brand new episode of “NCIS: New Orleans”. And now it’s up to the NCIS to piece together everything that led up to one of their own catching a bullet to the chest.

Prior to his murder, it seems that Petty Officer Peter Carp was considered an odd one among his fellow crew members. Apparently he had been out on the seas for the last six months and yet when it came time for him to take some leave – he didn’t appear to want go ashore. And in case you think he was someone that wanted to solely focus on his career – his commanding office can easily put that theory to ret right away.

In fact, according to reports, he didn’t appear to even want to be in the Navy. So that’s why it was more than peculiar that it actually took some convincing on the part of others to finally get him to take break.

But when he was finally convinced, of course the first place he wanted to visit just had to be a strip a club. You see the rules are that while on shore leave he has to stay with two other officers. Yet he ditched these other men he was supposed to stay close to at a jazz club. And then unbeknownst to everyone else, including the people that then conducted a city search, he went to the strip club and soon got so drunk he ended up becoming one of those mean drunks.

He made a pass at a stripper and she told him she wasn’t on the menu. And though she didn’t change her mind – she did stick around long enough to hear Peter harp on his life and the career that he hates in the Navy. It seems he told her that he was supposed to be a big shot doctor and he’s never gotten over that. So the investigators looked into that for themselves and funnily enough they found out why Peter had joined the Navy seemingly against his will.

It looks like Peter had dropped out of med school after he had been accused of rape by a fellow student. And as things went an allegation was made one day and the accused literally dropped out of school and enlisted the next. Afterwards, with Peter gone, his victim decided to simply move on with her life so she never pressed any formal charges.

Because she did not do that, Peter was allowed into the navy and was soon deployed.

Though, sadly this isn’t a case about a simple revenge. An autopsy that was performed on their victim revealed that Peter had been murdered by the same weapon that had killed two other, unconnected, men. So while the investigators would love an open-shut case – what they have instead is a serial killer. And later they found their killer’s hit-list.

Evidence left at the strip club led the investigators into checking out the tunnels the homeless tend to frequent and right there on that wall was the name of three of the victims and one other name. This other name was Kevin. And Kevin is not dead. At least not yet.

Out of all the victims, the one thing that connects them is that each had committed a crime and somehow later evaded the law. One had turned state’s evidence and received immunity for everything he had done. The other had been drunk when he drove his car and killed innocent teenager. Yet the breath analyzer was considered faulty meaning he got to walk on a technicality. And, well, Peter had joined the Navy to get away from rape charges. So when the NCIS found Kevin, the first thing they needed to know was why he was on a vigilante’s hit-list.

Because that’s who they’re going after. A vigilante who probably believes their cleaning up the streets by taking down someone not even the cops could lock away.

And this person is receiving help. For every name that was written on the wall, their victim all came from the same impoverished neighborhood. Apparently, it was the people in the neighborhood that was supplying the names and it was them asking for justice. But, along the way, they got it wrong with Kevin.

Kevin had claimed to have no alibi on the night a young man from the same neighborhood was murdered. Yet when his life was threatened – he confessed to being with his boyfriend on the night someone was beaten to death. And so the mother of that murdered young man decided to break the code of silence.

You see it was her that had put Kevin’s name on that wall and she did so when she believed he had murdered her son and was going to get away with it. But when she found out she was wrong – she knew she had to stop the vigilante before he hurt a man that just wanted to protect his family from finding out the truth about him. So she handed over someone named Boogie Down Bob. Boggie was a homeless man she used to help and everyone in their neighborhood had suspected he was the vigilante. They merely chose not to do anything until now because after Hurricane Katrina they knew it was easier to simply look after their own.

And on tonight’s episode, Agent Brody ran into her ex fiancée James and we last saw her trying to come decision on whether she wants to try again.