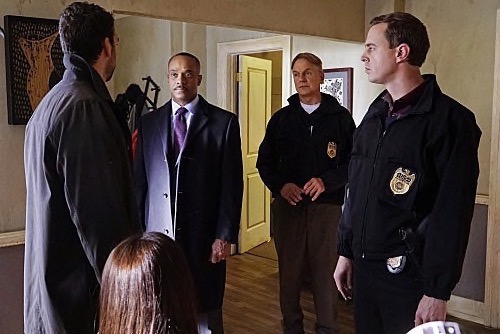 Tonight on CBS NCIS returns with an all new Tuesday March 24, season 12 episode 18 called, “Status Update” and we have your weekly recap below. On tonight’s episode, McGee [Sean Murray] reunites with his girlfriend Delilah to investigate the death of a thief who is found dead in a marine’s house. The probe reveals a clue to a terror group Delilah and the Department of Defense have been tracking from Dubai.

On tonight’s episode as per the CBS synopsis, “after the body of a thief is found in a Marine’s house, NCIS discovers the calling card of a terror group Delilah and the Department of Defense have been tracking.”

A body found right off of base housing was called in and so the NCIS team showed up at the scene expecting to find their victim to be the homeowner or at the very most the homeowner’s wife. Yet the marine, who owns the home, had only recently arrived on leave and according to him he’s never seen the woman that was found dead on his garage floor before. So actually it was up to the team to figure out who their victim was. And what they found was a thief.

Their victim, if she can honestly be called that, was a known thief with a long rap sheet. Mallory it seems was ransacking the marine’s home after his wife had foolishly posted her whereabouts on twitter. So while the family was away – that little rat decided to play. Mallory was selling off their expensive gym equipment and was currently breaking into their safe when she was murdered.

Someone stopped her and according to Ducky, the person that killed Mallory didn’t appear to have planned it.

She was killed with a blunt object and in a stabbing scenario that makes it difficult on both the victim and perpetrator. Meaning whoever targeted her probably didn’t think she was going to be there. If you recall, the hose was supposed to be empty. The couple that owns the home were gone and Mallory was an unknown entity.

So it seems like two people broke into the house expecting to find it empty and one ended up having to kill the other. However the killer left behind a calling card. Literally a calling card! That also identified the second intruder as having been a part of a small terrorist group.

The group is led by Omer Malik and he’s been on the watch list for some time. Hence McGee was able to recognize the symbol he left behind seeing as his girlfriend Delilah has been tracking Omer for the last couple of months as part of her job. So, with ally so to speak on the otherside, McGee reached out to Delilah and her people hoping to find answers about this guy they were looking for. Yet he and his team were unable to get straight answers and despite Director Vance’s presence – Delilah wasn’t allowed to divulge too much information.
Essentially, they were cut off from what was really going on and it wasn’t until their investigation careened into Delilah’s undercover work that they got answers.

For the last few months, the Department of Defense had been using Delilah as a draw to lure Malik in. She was pretending to be a disgruntled employee that had both clearance and who could possibly join Malik in his cause one day. So he was actually really close to recruiting her.

But when McGee and Gibbs broke her cover by showing up at the safe house – they had to be told everything. And that particular story began with Delilah having been in the states for the last week.

So, naturally, McGee was upset by this. He had just found out his long-distance girlfriend had left Dubai without telling him and that she hadn’t also hidden the fact she was a couple of miles away from his office. And that’s why afterwards he needed some kind of reassurance about their relationship.

Yet, what with her sting being compromised, Delilah didn’t want to waste time trying to talk to a needy and jealous boyfriend. At least no when she was upset. So she kind of needed her space for a while. Though, who’s usually very generous, McGee had to once again push himself into her life when Gibbs ordered him to bring Delilah in.

Apparently without Homeland’s help, NCIS weren’t getting any closer to finding Malik. It seems he had gone underground after he killed Mallory and the only way to get him to pop his head back out was to dangle the one person he was obsessed with. And according to his accomplice and Papa John’s delivery boy, that was Delilah.

Malik had sort of a crush so McGee just had to bring Delilah in to play on that crush. But when he got to her safe house – it turns out it wasn’t so safe. For Malik had found them both there and he managed to get the better of them before they could for help.

Luckily, however, Malik was not dealing with two newbies. He was dealing with trained agents and eventually Delilah had convinced him she was on his side and that she wanted to join him on his mighty crusade. Though, before he believed her; he asked her to prove her loyalty by killing McGee. So instead she chose to stab him.

And that bought them enough time until the cavalry arrived to save them.

You see Gibbs had called Mcgee several times on his phone without the other man answering. And he knew that was just too weird even if McGee was possibly fighting with his girlfriend at the time. So the NCIS arrived armed to save McGee and Delilah and after they had been captured together – the couple managed to work out most of their issues.

Which is good because Delilah later received a promotion for helping take down Malik and that means she gets to stick around in the neighborhood for a while.