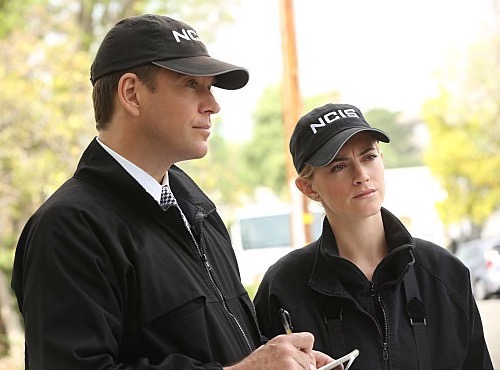 Tonight on CBS NCIS returns with an all new Tuesday April 14, season 12 episode 21 called, “Lost in Translation” and we have your weekly recap below. On tonight’s episode, Gibbs [Mark Harmon] and Bishop go to Afghanistan after the murder of a marine in Washington, D.C., is linked to a terror group that is holding another marine hostage overseas. Meanwhile, DiNozzo [Michael Weatherly] gets upset when he learns that McGee is the new face of NCIS on recruitment brochures.

On the last episode, DiNozzo was partnered with his girlfriend ATF Special Agent Zoé Keates after evidence revealed that the murder weapon in an NCIS case was originally purchased for the controversial ATF sting operation “Operation Fast and Furious.” Also, Anthony DiNozzo Sr. returned to town for a special dinner to meet his son’s girlfriend. Robert Wagner returned as Anthony DiNozzo, Sr. and Marisol Nichols returned as ATF Special Agent Zoé Keates.

On tonight’s episode as per the CBS synopsis, “Gibbs and Bishop travel to Afghanistan after the murder of a Marine in D.C. is linked to a terror group holding another Marine hostage overseas. Also, DiNozzo is upset that McGee was chosen to be the new face of NCIS for all recruitment brochures.”

Tonight’s episode looks like it is going to be great and you won’t want to miss it, so be sure to tune in for our live coverage of CBS’s CSI NCIS at 10:00 PM EST! While you wait for our recap hit the comments and let us know how excited you are about this season.

Tonight’s episode of NCIS kicks off with a man knocking on his friend’s door – he shouts “You’re making me late Captain.” He hears a thump inside and sees his friend fall on the floor covered in blood through the window. He kicks in the door and the assailant is still inside and wearing a ski mask, after a brief scuffle the killer stabs him in the side and rushes out the door.

At work Tony arrives in a new suit, Bishop raves about how great he looks. McGee jumps in and says that he has been modeling, ever since he went undercover – and he has been chosen to be the new face of NCIS. Bishop shows Tony the brochure with McGee’s face plastered over it. Tony is not happy, he can’t believe that he was “passed over” for the gig. Gibbs interrupts and says they have to hit the road – there is a dead marine.

Gibbs and his team arrive at the house where the marine was killed – Ducky is already on the scene. McGee finds his ID and learns that the Captain’s name is David Landis. Joseph Wilks is the witness who kicked in the door and was stabbed in the side – he is with the EMT’s. Outside Tony is interviewing the neighbors, Mr. Ashborne ran in to the killer outside, he said he was only in his mid-twenties and he was definitely Middle Eastern.

Gibbs heads outside to the ambulance and talks to Wilks – he says that he and Captain Landis served two tours in Afghanistan together and they were like family. They were running together every morning and training for a marathon. Wilks is upset, he blames himself for letting the killer get away.

Back at the lab Gibbs visits Abby and she serves him tea – she says he needs to be calm before she gives him news. She got fingerprints form the crime scene and the assailant was a 21 year old Afghan named Kasim Nasir with ties to the Taliban, he is also on the terrorism watch list. Somehow he managed to get in to the United States undetected.

In the office McGee has a life size cardboard cutout of himself set up next to his desk. Bishop raves about how awesome it is. Tony doesn’t think so though – he grumbles that they are NCIS agents and they need to start acting like them. Gibbs arrives and demands an update – McGee says that Landis returned 8 months ago from Iraq. Bishop says that Nasir has an older brother named Rasheed, and he is responsible for over 100 terrorism attacks in Afghanistan. Gibbs orders Tony to go talk to Wilks and finds out if Landis has any ties to Kasim or Rasheed.

Gibbs visits Ducky for a report, he says that whoever killed Landis was a professional. He thinks that the killer was torturing the Captain, and when Wilks arrived outside he panicked and stabbed Landis in the neck and killed him instantly.

Tony and McGee head to Wilk’s house to question him – he isn’t home, but they see Kasim outside the front door. After a brief chase they catch Kasim and arrest him, they find a knife in his pocket. Kasim is brought in for questioning – he insists that he is innocent and he didn’t kill Landis. When they bring up his brother Rasheed, Kasim says that he is nothing like his brother.

Bishop stops Gibbs in the hallway, she says that she thinks there was a mistake. Bishop says that Kasim and Rasheed’s parents were killed by the Taliban, and they took the boys and brainwashed them and changed their names. Bishop thinks that Kasim was hiding from the Taliban in the United States. Abby runs tests on Kasim’s knife and learns that it is not the murder weapon that killed Landis. Wilks arrives at the NCIS office and informs Gibbs that they have the wrong guy, he says Kasim is “one of them.” Apparently, Wilks and Landis are the ones that smuggled Kasim in to the country.

Gibbs is not happy with Wilks – he plans to report him. Wilks begs Gibbs to let him see Kasim before they take him in. Bishop receives a text message from an informant named Martinez. McGee and Bishop meet Martinez in the park – she has intel from the Taliban, apparently Rasheed put a bounty on his own brother Kasim’s head.

Gibbs and Wilks visit Kasim in the interrogation room – they tell him that Rasheed put a bounty on his head, they think that Landis was tortured by someone who was trying to find Kasim. Kasim isn’t shocked that his brother is responsible for Landis’s death – he reveals that Rasheed was turned by the Taliban when they were kids and he killed their own parents.

Gibbs gets a call, and heads to the Corporal’s office. Rasheed took a marine hostage in Afghanistan and uploaded a hostage video – in the video he says that the United States has 48 hours to deliver his brother Kasim to him, or else he is killing the soldier. Corporal tells Gibbs that he needs to get Kasim ready to ship out, the state department has ordered it. Gibbs is not happy – he argues that the US doesn’t negotiate with terrorist or cower down to them.

Gibbs and Bishop board a helicopter with Kasim and head to Afghanistan. Back at the office, Abby gets a lead on the knife that was used to kill Landis. She tells McGee that it was army issued and sold exclusively to private defense companies and US soldiers. Gibbs and Bishop arrive in Afghanistan with Kasim – at the army base the soldiers rush to greet Kasim and treat him like family and tell him how much they have missed them. The Sargent tells Gibbs that they have no intention of handing Kasim over to his brother, they have scouts out in the desert looking for Rasheed’s lair.

Tony has a theory – he has McGee check the suspect pool for Landis’s neighbor Ashborne. Apparently Ashborne worked for an artificial intelligence company and he was stationed in Afghanistan. They search Ashborne’s house and find the murder weapon – he killed Landis and has been working for Rasheed. They find cash deposits in Ashborne’s bank account from Rasheed. McGee an Tony bring Ashborne in for questioning – he killed Landis, but he swears he has no idea where Rasheed is holding the American marine in Afghanistan.

Meanwhile in Afghanistan, Kasim goes missing. Gibbs realizes that he snuck off the army base to turn himself over to his brother Rasheed and save the kidnapped marine. They find the vehicle that Kasim drove off the base abandoned in the desert – and it has been set on fire. Bishop finds Kasim’s bulletproof vest lying on the ground, and it has a bullet hole in it.

They use heat imagery to find Rasheed’s safe house from aerial shots and Gibbs plans the attack – he announces that they are sending Bishop in to the safe house. Bishop argues that she isn’t ready, and she can tell that Gibbs read her file. He is trying to get her to overcome her fears because she lost her interpreter Taj while she was stationed in Afghanistan.

Bishop shows up at the base in an unmarked vehicle and tells the guard at the front that she is a doctor. Inside, Kasim is still alive, his brother Rasheed is torturing him and tells him that when he dies it will be dealt by his hands – not his men’s. Kasim begs his brother Rasheed to let the badly beaten marine go free, he is laying on the other side of the room unconscious.

Gibbs slips in with Bishop, and he is quickly discovered and shots ring out. Gibbs shoots and kills Kasim’s brother Rasheed, and the soldiers rush in and they grab Kasim and the kidnapped marine and rush them out of the safe house.

Back at the office Tony apologizes for destroying McGee’s cardboard cutout. McGee and Jim laugh and reveal that he isn’t the real face of NCIS and shout April Fool’s! They faked the brochure and cutout. Tony brags that he taught them well.