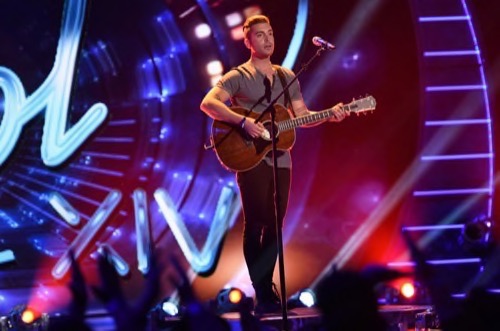 Nick Fradiani sang, “Only the Good Die Young” by Billy Joel this week for his “Arena Anthem” hit song choice. The Top 6 will really have to bring their A game tonight to stay around for another week, we expect a higher level of performances as the contestant pool diminishes as we head towards the finale. Did you watch tonight’s performance show? Just in case you missed tonight’s show we have you covered and you can read our full and detailed recap here! Did you miss any of the videos tonight? If you missed it we have the video, right here.

On tonight’s episode Nick Fradiani sang “Only the Good Die Young” by Billy Joel and this is what the judges said about his rendition:  Keith comments, “I don’t want to run out of tie.  Who’s arrangement was that?  That song is amazing done like that, and it played to every part of your strengths.  10 out of 10 man.”  Jennifer agrees, “I was really loving it the whole way through.  I was waiting for you to get up, and then you did and I was really happy.  That’s the thing about performing, you can’t plan things.  When you start feeling it, you got to go.”  Harry closes with, “I applaud you for what you did with that song.  I always felt when he was singing with it that he was pleading to a girl, I didn’t feel that – I thought it was an adventurous interpretation.  That arrangement threw me off.”

On tonight’s episode the Idol Fan Save is back.  It is your chance to save one of the bottom two finalists and keep them around for at least another week!