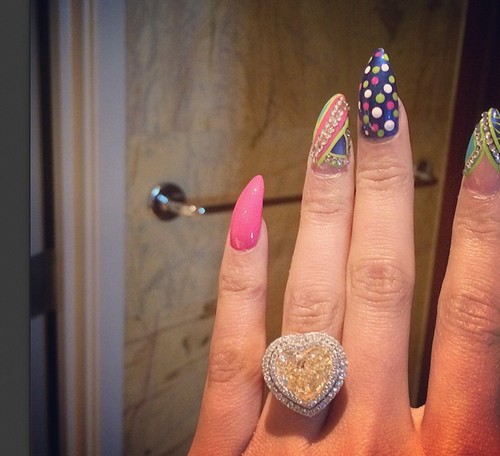 Nicki Minaj and Meek Mill are engaged and Nicki is sporting a diamond engagement ring on Instagram according to recent reports. After a few months of tons of rumors flying about rapper Nicki Minaj and Meek Mill, could the couple be getting married? The two young rap stars have faced rumors of dating, which they confirmed to be true in February, and then rumors started surface that Nicki Minaj was pregnant with Meek Mill’s child, and now the latest is that the two are engaged. Find out why below!

On Wednesday April 15, Nicki Minaj tweeted the emojis for a diamond ring, a heart, and a diamond, followed by the worlds, “I’ll post it later.” I mean, if that does not mean that the two are getting married, we don’t know what else it could possibly be.

Right before that, Minaj posted on her Instagram page with a picture of the couple who were in Miamia for the evening. Minaj also sported an enormous diamond ring on her wedding finger. She captioned the photo “Those Miami nights,” with a palm tree emoji. 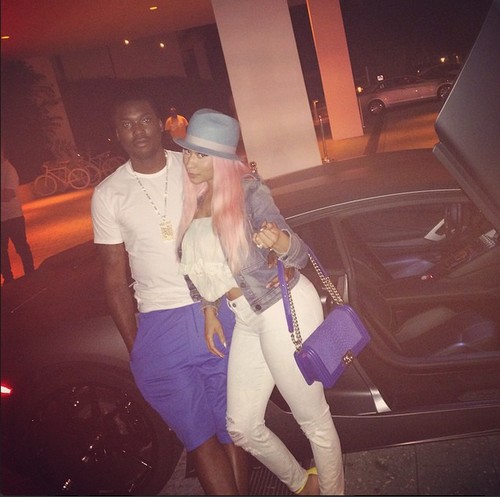 Fans flooded her Instagram page noticing the huge ring on Nicki’s finger. One comment reads “Apparently that’s an engagement ring!” Another says, “Congrats Onika! Be smart and get a prenup tho,” followed by a heart.

Minaj also took to Instagram on Tuesday April 14 with a picture from what seems to be the balcony of her suite in Miami, with the caption, “I wish every night could feel like last night. Hello Miami.” Does that mean that Meek Mill proposed to the “Anaconda,” rapper on the night before?

The two began became public in February, and announced their relationship with a photo of Meek Mill kissing Nicki on the cheek. Since then, they have done little to hide their affection for one another, being spotted at countless parties together, and going out for a ton of dinner dates.

We will keep you updated when we get more information, but, if this is what we think it is, congratulations to the new couple. Could they be the next Beyonce and Jay-Z? Let us know what you think!