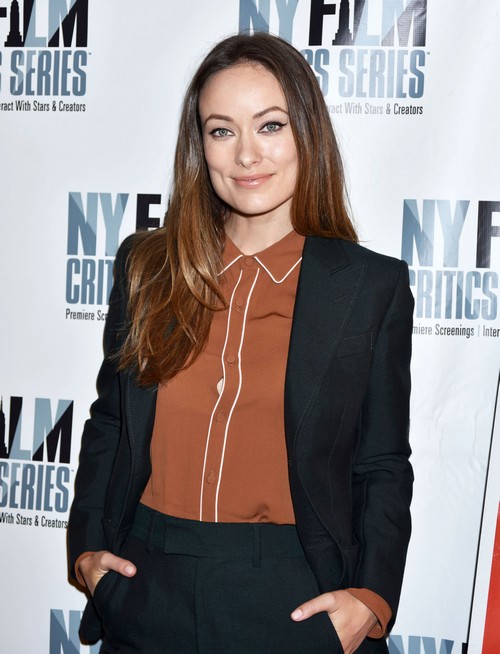 Does Olivia Wilde have a lesbian past? Fiancé Jason Sudeikis wants some answers about it! The couple taped an episode of the Bravo night time talk show “Watch What Happens Live” on Thursday, October 15 – that’s when Sudeikis asked Wilde if she had indulged in any off-screen lesbian relationships.

The question came during a segment that included the game “Plead the Fifth.” Olivia’s answer to the question about off-screen lesbian relationships was, “Well…I appreciate all people.” Why would Jason ask the actress such a question?

Probably because Wilde has kissed a lot of ladies on-screen – most notably Mischa Barton on the second season of “The O.C.” In a previous appearance on “WWHL” Olivia Wilde did reveal that the best kiss she ever received from a female co-star was in fact Mischa!

Jason Sudeikis and Olivia Wilde – parents to 18-month-old Otis – have been engaged since 2013. Are they putting off setting a wedding date until Jason gets some answers about her past sexual history? Olivia has a history of keeping her relationships on the down low. In 2003 she married Tao Ruspoli – an Italian filmmaker and musician in a secret ceremony – on a school bus. Why a school bus? Because that was the only place the couple could find where they could be alone. The marriage ended September 2011 and the financial settlement has never been revealed.

Should the “Saturday Night Live” alum be nervous that his famous fiancé will dump him for a woman? Or was he just joking around when he was pressing her for information during their appearance on “Watch What Happens Live”? Jason Sudeikis is a comedian after all! But no matter how hard Sudeikis pushed Olivia wasn’t going to budge. She stuck with her answer “I appreciate all people.”

During the game of “Plead The Fifth” – a favorite of “Watch What Happens Live” host Andy Cohen – Oliva also avoided questions about the craziest place she would have sex. But she did make fun of his ability – or lack thereof – for folding laundry. “[He] folds everything perfectly, it makes my clothes look really bad. So he just makes me look like a disaster.”

The questions about Olivia Wilde’s lesbian past seemed to be in jest but do you think Jason Sudeikis really wants some answers? Or does he already know and was trying to out his girlfriend? What do you think?