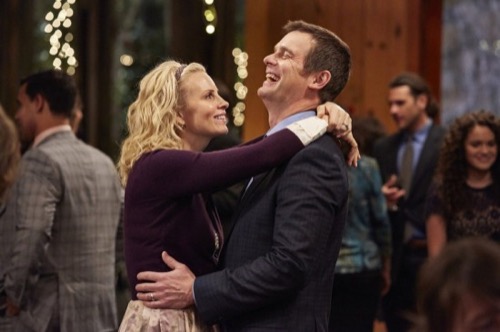 Tonight on NBC Parenthood starring our favorite family the the Bravermans returns with an all new Thursday January 29, season 6 Finale called, “May God Bless and Keep You Always” and we have your weekly recap below. On tonight’s episode, in the series finale, Sarah [Lauren Graham] prepares for her special day. Meanwhile, Hank [Ray Romano] has big questions for Zeek [Craig T. Nelson] and Drew [Miles Heizer]; Amber adapts to motherhood; Julia and Joel [Sam Jaeger] get a phone that prompts a crucial decision; and Kristina presents Adam with a plan for the future.

On the last episode, Camille (Bonnie Bedelia) and Zeek (Craig T. Nelson) made a decision concerning Zeek’s health. Sarah (Lauren Graham) made a big decision and shared some good news with her dad. Adam (Peter Krause) and Crosby (Dax Shepard) clashed over differing business opinions, and Adam standed his ground, deepening the tension between the brothers. Amber (Mae Whitman) rushed to the hospital with labor pains, and the Bravermans flocked to her side. Also Starring: Sam Jaeger, Erika Christensen, Joy Bryant, Max Burkholder, Savannah Paige Rae, Xolo Mariduena and guest stars Ray Romano and Ally Ioannides. Did you watch the last episode? If you missed it, we have a full and detailed recap right here for you.

On tonight’s episode as per the NBC synopsis, “in the excitement of her big day, Sarah (Lauren Graham) surrounds herself with the original Braverman clan. Meanwhile, Hank (Ray Romano) approaches Zeek (Craig T. Nelson) for his blessing and asks Drew (Miles Heizer) for a special favor. Amber (Mae Whitman) adjusts to life as a new mom with a little help from her grandparents. Julia (Erika Christensen) and Joel (Sam Jaeger) get a phone call that forces a life-changing decision. Max (Max Burkholder) gets his first job, while Crosby (Dax Shepard) and Adam (Peter Krause) reach an understanding about the Luncheonette. Kristina (Monica Potter) presents Adam with a new plan for the future of Chambers Academy, and for their family. Also starring, Joy Bryant, Bonnie Bedelia, Savannah Paige Rae, Tyree Brown, Xolo Mariduena, Mia and Ella Allan and special guest stars Sarah Ramos, Matt Lauria and John Corbett.”

It’s time to say goodbye for the Bravermans and they’re doing so in more ways than one. Not only is the Luncheonette closing its doors but one of the Bravermans is no longer going to be a Braverman. After all, once Sarah marries Hank then she’s going to be Mrs. Rizzoli.

However, before they say their “I Do’s”, there were a few things that needed to be wrapped up. Like having photographer which Max happily agreed to be when he realized this was going to be his first ever job. And then there was the position of Best Man needed to be filled. So for that Hank went to Drew.

Hank wants Sarah’s family to support them on their upcoming day so asking his soon to be stepson to stand up for him was just one of the many things he did to reassure the Bravermans that he had Sarah’s best interests at heart. He made sure to keep his future stepchildren involved and earlier he had even gone to Zeek to get permission. Though with Zeek, Hank wanted to make sure the older man had all the facts before he gave his daughter’s hand away in marriage. Because it seems Sarah failed to mention her future husband was on the spectrum with a mild form of Asperger’s.

Zeek, ultimately, didn’t have a problem with Hank’ condition but he was really proud that someone finally came to him for permission. Sarah’s first husband hadn’t been half as considerate.

Still, things are changing for their family, and it appears that they’re just going to keep on growing. Julia and Joel had gotten a call from Victor’s social worker and though they were worried the terms of their adoption were about to be contested – the social worker actually had some other shocking news to divulge. For it seems that Victor’s biological mother had recently given birth to baby girl and she wanted the Grahams to have the first chance to adopt this new child.

So Joel and Julia told them they would think about it. But, truthfully, they really want to adopt that little girl. And only that stopped them for saying “yes” right away is the fact they just got back together. No one wants to bring a new child into a marriage that’s still working out all the kinks!

Then there was the Luncheonette. Adam didn’t want to do it so the place was closing but Cosby and Amber actually loved the business. So Zeek had a chat with his son and he told him not to doubt his own capabilities. If Cosby wanted to keep the business going then he should just go ahead. Even it was without Adam.

And Cosby eventually did learn to trust himself enough to take his father up on that challenge. Because, after he was done trying to talk himself out of it, he told Amber that they were going to keep trying to make a go of their business.

Amber needed the Luncheonette just as much as he did. She had a new baby and frankly she also needed a new place to live. So she really did need some way of supporting herself and while she did later agree to move in with her grandparents for the time being – having a career means she can and will get back on her feet.

And so Sarah and Hank’s wedding was beautiful. There wasn’t tension in the family and they were simply there for each other.

But, sadly, it wasn’t that long after the celebrations that the Bravermans said their final goodbye to Zeek. Due to his poor health, the patriarch of their family had passed away in his sleep. And so later when they honored him, they spread his ashes at the baseball field he loved. Then had a friendly game with each other.

Joel and Julia would go on to adopt Victor’s sister as well as have another.

Amber will meet someone and her son’s father did return to the picture.

Max, in spite of what a lot of people had said, also will graduate from school thanks to his parents never giving up on him.

And as for the Luncheonette, it seems Cosby never should have doubted himself because he does eventually make a success of what a struggling music studio.

So though, it was bumpy ride these last couple of years, The Bravermans are going to be just fine!