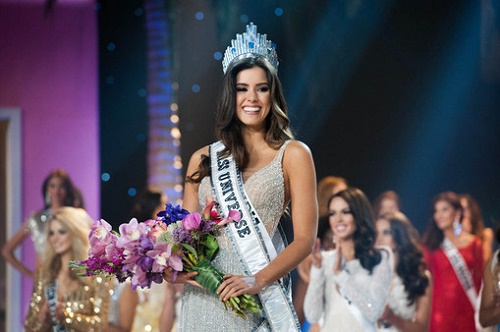 The Miss Universe 2014 winner has been announced, and it’s Pauline Vega of Colombia! Vega beat 87 contestants around the world, including Miss United States, Miss Canada, and Miss United Kingdom. The title was formerly held by Miss Venezuela Gabriela Fisher, but Fisher gladly relinquished the honor to Vega.

The event took place in Florida, and in addition to musical performances from Gavin DeGraw, Prince Royce, and Nick Jonas, there were also judging appearances from Kristin Cavallari, William Levy, Lisa Vanderpump, Nina Garcia, and a series of other C-list and D-list reality stars. When you add that to the fact that it was hosted by Thomas Roberts and Natalie Morales, I almost want to call the Miss Universe 2015 organizers and ask them what they were thinking.

Now, the actual show – or at least, the broadcast version that came live – went into the competition between the fifteen semi-finalists. Everything that came before that was quickly summarized, and the show mainly focused on the battle between the final fifteen. These included Pauline Vega of Colombia [duh], and also Miss Italy, Miss India, Miss France, Miss USA, Miss Indonesia, Miss Venezuela, Miss Spain, Miss Philippines, Miss Argentina, Miss Jamaica, Miss Ukraine, Miss Brazil, Miss Netherlands, and Miss Australia.

Historically, South American countries have a great track record with beauty pageants, especially Miss World and Miss Universe. If we round up figures, Miss Colombia, Miss Venezuela, Miss Brazil, and others in South America have probably won more collective beauty pageants than all the other continents combined.

What do you guys think about the Miss Universe 2014 winner being Pauline Vega of Colombia? Were you rooting for someone else to win? Or are you happy that Pauline Vega won the competition? Let us know your thoughts in the comments below.