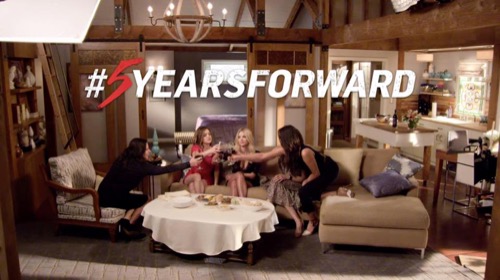 Pretty Little Liars returns to ABC Family tonight with an all new Tuesday November 24, special episode called “5 Years Forward,” and we have your recap and spoilers below. On tonight’s episode we’ll be getting a behind the scenes look at Pretty Little Liars and the five-year jump ahead from the cast & crew.

For those of you who don’t know, Pretty Little Liars is about four estranged friends are reunited because of mysterious messages that suggest their missing friend is watching them and that someone knows their deepest secrets. Based on the series of books by Sara Shepard.

On the last episode, who killed Toby’s mother? Who hit Alison in the head with the rock the night she went missing? Who was Red Coat? Who killed Bethany? Who was the Black Widow? Why had “A” been targeting the PLLs all this time? After years of torture, Alison, Aria, Emily, Hanna and Spencer finally came face-to-face with their tormentor and learned the story of how and why Charles became “A.”Did you watch the last episode? If you missed it, we have a full and detailed recap right here for you.

On tonight’s episode as per the ABC Family synopsis, “To give viewers a taste of what’s to come, the special episode will reveal what the Liars have been up to inside and outside of Rosewood over the past five years. In addition to featuring conversations surrounding new careers and love interests, the episode will feature interviews with the team behind the Liars’ new looks. Fans will also be offered a glimpse at brand-new PLL sets and two new scenes that won’t be seen anywhere else. Plus, the PLL moms speculate about what happened to their characters after getting locked in the basement.

The special episode of PRETTY LITTLE LIARS is going to be really exciting and we’ll be recapping it for you right here.

Tonight’s special episode of “Pretty Little Liars: 5 Years Forward” will give PLL fans an idea of what they can expect when the show returns – and five years have passed. Tonight’s host will be the show’s head writer and producer Marlene King, she sits down the cast of PLL on one of our favorite sets – Spencer Hasting’s barn. The cast and crew begins dishing on what we can expect to see during the season premiere.

Ashley Benson reveals that her character Hanna moved to New York with Caleb right after high-school, they lived in Tribeca and Ashley went to Fashion Institute. Eventually Hanna became an intern for ZA Posen and wound up travelling to Europe. Hanna reveals that things didn’t really work out for Hanna and Caleb – she got engaged to a new boyfriend when she was in Europe.

Troian Belisario reveals that after high-school, her character Spencer Hastings went to college in Georgetown. Spencer and Toby fell apart because he stayed in Rosewood and continued working as a police officer. Toby was too “small town” for Spencer, she wanted to take over the world. After Spencer graduated from college she heads to work on Capitol Hill. Back in Rosewood, Toby Cavanaugh inherited some money and built a dream house, he has a new woman in his life named Ivonne Phillips.

Shay Mitchell reveals that her character Emily moved to Califorinia, her father passed away in the army and she wound up dropping out of college. Emily begins bartending in Cali. Marlene King teases that Emily comes back to Rosewood with the biggest secret of all of the girls – and the most baggage. What could have possibly happened to Emily during the time jump?

Next, Marlene King shares a never-before-seen clip. Three months after the big “A” reveal, Alison and Jason visit Charlotte/CeCe at the psychiatric hospital. Cece is sitting outside on a park bench, reading a book – she hugs Jason and Alison, they seem to be on the road to forgiveness.

Lucy Hale discusses what Aria Montgomery has been up to since high-school. She moved to Boston after graduation to pursue a career in writing – she works for a publisher and is dating a new man named Liam. Aria and Ezra wind up reconnecting because her company is publishing a book that he wrote.

Ezra and Aria went their separate ways after Aria graduated from high-school. Ian Hardin reveals that his character Ezra travelled to South America to do Habitat For Humanity with Nicole, while he was away something “horrible and violent” happened to him. Apparently, Ezra is in a very dark place and has been drinking his life away and turned in to a pretty angry drunk.

Next, the Pretty Little Liars costume designers sit down and discuss how much fun it was to switch up their wardrobes and age them five years. Spencer, Emily ,Hanna, and Lucy will all have much more mature looks when they return to Rosewood after the time jump. Also, musical composer Michael Suby discusses what he has in store for the Pretty Little Liars music after the time jump. Suby explains that the music is constantly evolving, but he did make the music a bit more sophisticated to show that the girls have grown up some.

Now, it’s time to take a look at some of the new sets that have been put up in Rosewood. Apparently, they turned Radley Sanitarium in to a super posh hotel – and there is supposedly nothing creepy about it. The liars actually take a trip to the boutique hotel for lunch. Also Spencer’s barn has finally gotten to be redesigned – and Spencer is finally living in it after all of these years. She moved back in to her parents’ property to help her mom with her Senate campaign.

Shay, Ashley, Troian, and Lucy discuss how emotional it was for them to say goodbye to their teenage characters and the “A” storyline. Troian says that the hardest goodbye was leaving Alison goodbye in that front yard. It was like she was driving away from her childhood. The girls reminisce about shooting the pilot scene to Pretty Little Liars of the night that Alison disappeared. The night after they filmed the pilot, Ashley Benson found the theme song “Two can keep a secret” on YouTube and showed it to Marlene King. Ashley can’t believe that she was only 19 years old back then, and she has spent most of her 20’s on PLL.

The special episode ends with a never before seen clip between Alison and Mona. Alison is a teacher at Rosewood now, Mona returns home from college and stops by the high-school to visit Alison. She brings a box of cupcakes and asks Alison to spend her birthday with her. Apparently, Mona has been trying to sneak in to see Charlotte, they wouldn’t let her in. Alison demands to know what Mona really wants. Mona says that she is about to start a career in the public eye and she needs to know that Charlotte will not try to rehash old history and destroy Mona’s career. Alison sneers at Mona to leave her sister alone, the only thing Charlotte is worried about is getting better.