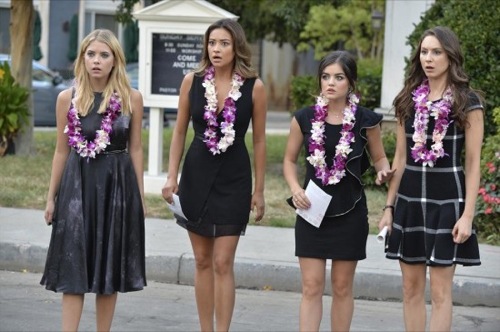 Pretty Little Liars returns to ABC Family tonight with an all new Tuesday January 6, season 5 episode 14 called “Through a Glass, Darkly,” and we have your recap below. Tonight on the winter premiere, the girls seek justice for Mona [Janel Parrish] and grow determined to find evidence that will incriminate Alison, using any means necessary. Meanwhile, Paige and Emily [Shay Mitchell] reach a turning point in their relationship; and Aria [Lucy Hale] becomes concerned about her future.

On the last episode, Christmas was quickly approaching, and all of Rosewood was full of merriment, except for Aria, Emily, Hanna and Spencer, who weren’t feeling much holiday cheer after the loss of Mona and Spencer’s murder charge looming over them. But when an opportunity presented itself with the chance to get evidence to clear Spencer’s name, the girls and their partners devised a plan to get justice for Mona and finally bring Alison down. If the plan is successful, it could be a very Merry Christmas after all. Did you watch last week’s episode? If you missed it we have a full and detailed recap, right here for you.

On tonight’s episode as per the ABC Family synopsis, “Three months have passed, and Mona’s friends and family are still mourning their loss and more adamant than ever that Alison had something to do with Mona’s death. Ready to put “A’s” game to an end and get justice for Mona, the PLLs ramp up their search for evidence that could prove Alison killed Mona. But with Alison claiming her innocence and having a seemingly airtight alibi, the Liars may have to resort to more shady tactics to put Ali away.”

The fourteenth episode of season five’s PRETTY LITTLE LIARS is going to be really exciting and we’ll be recapping it for you right here.

Tonight’s episode of Pretty Little Liars kicks off with the liars leaving Mona’s funeral. Hanna grumbles that it’s silly having a funeral when there is no body, no murder weapon, and no one has been arrested. They are shocked when they see Alison DiLaurentis arrive and talk to Mona’s mother – she tries to tell her that she is just paying her respects. But, Mona’s mom freaks out on her and smacks her and screams “where is her body?” Hanna rushes to her side and comforts Mona’s mom and leads her away.

Hanna takes Mona’s mom home – and after helping her clean up Hanna gets ready to leave. Mona’s mom apologizes for freaking out at the service, but she knows it was Alison that did it. She cries that it was “like Mona is lost at sea.” She just wants Mona’s body back. Spencer heads home, and her father is waiting for her in the kitchen – Spencer tells him that her mom isn’t home. Peter explains that Bethany Young’s parents have petitioned the court to have her bail revoked.

At the police station – Toby finds Spencer Hastings’s arrest warrant. He learns that what convinced the judge to revoke her bail was a signed statement from Mrs. DiLaurentis the night that Alison went missing revealing that she saw Spencer in their backyard with a blond girl dressed in Alison’s clothes. The statement had been hidden by Wilden for two years, but the Rosewood police just found it.

Emily and Paige are laying in bed discussing Paige’s move to California. Emily doesn’t want her to leave school early and miss graduation, she wants to try to convince her parents to let Paige stay. Paige whines that she has tried and it is pointless, they don’t want to hear it. Emily agrees to drive her to the airport.

At Hanna’s house, she and Caleb are chatting about Mona’s funeral. Caleb has Mona’s computer, but it’s locked and scrambled – he is still trying to work on getting in to it. Hanna wants to find Mona’s body, she says they should go ask the psychic from Ravenswood, Mrs. Grunwald. Caleb warns Hanna that it is not a good idea, and even if they did find the body, how are they going to explain it to the police.

Aria is sitting outside reading a rejection letter from college when Alison walks up – Aria tries to leave and Alison won’t let her. Aria sneers that she knows she is “A” and she stole the game from Mona and killed her, and she killed Bethany Young because she was jealous of her. Alison tries to explain to her that she isn’t a threat but Aria starts blowing a rape whistle – when people gather around, Alison runs away.

The liars rush over to Spencer’s house to comfort her when they learn that her bail is about to be revoked. They decide that they need to prove that Alison killed Mona, and then the police will realize that she killed Bethany Young too and the crimes were connected. They decide that they should start by discrediting her alibi. Meanwhile, Mike is helping Ezra remodel his apartment – Ezra tries to talk to him about Mona, but he snaps on him. Ezra asks him if he thinks Mona is really dead and Mike yells that “no one loses that much blood and lives to tell about it.”

Spencer and Aria head to the DiLaurentis house and say they are looking for Emily’s mom’s muffin tin. Alison isn’t home, but Jason is. Spencer pleads that Jason tell the police the truth, she knows that Alison wasn’t with him all day on Thanksgiving. She cries that Alison is setting her up, and he is her sister too.

After Spencer and Emily get home, Emily reveals that she stole Alison’s hairbrush and she wants to plant Alison’s hair in Mona’s house. At the DiLaurentis house, Alison comes home and finds Jason looking at old family photos. He tells Ali that Spencer and Emily are right – she went somewhere on Thanksgiving. He demands to know where she went. Alison cries that Emily, Spencer, Hanna, and Aria are all framing her and she swears that she didn’t kill Mona.

Aria pays Caleb a visit at his apartment where he is trying to decrypt Mona’s computer and get in to her files. Aria explains that she keeps getting rejected from colleges, and she wants Caleb to hack in to the school’s website and find out if it is her fault or if “A” is responsible. Caleb agrees to help her get in to the site.

Spencer and Emily head to Mona’s house to try and plant evidence that Alison was there – but instead they find a camera hidden in the vent. They rush home and tell Hanna that she needs to go talk to Mona’s mom and tell her that there are cameras hidden in her house and they could have captured Mona’s killer. Hanna agrees and goes over to Mona’s house, Hanna tells her mom that she thinks Mona may have set up cameras in her house before she died because she was scared.

Aria heads to Ezra’s apartment to pick up Mike and she has Mona’s laptop with her. Mike isn’t there, but she turns around and comes face to face with someone in a mask and hoodie. They staple Aria to the wall and steal the laptop form her before running out of the apartment.

At the police station, they have the cameras from when Mona was murdered – although they don’t show Mona’s attacker’s face, you can see blond hair. They question Jason and he admits that the blond girl in the movie could be his sister and confesses that he lied and Alison wasn’t at his house the day that Mona was killed.

At Alison’s house, police sirens go off. Alison asks Jason to try and stall them – and runs out the back door. But, Spencer, Aria, Hanna, and Emily are waiting for her. They block the path and won’t let her out of the backyard. Alison cries to them that “A” set her up, and warns them that once she is in jail “A” is going to come after her next. The police arrive and handcuff Alison and inform her she is under arrest for Mona’s murder before they take her away.

Mike arrives at home and Aria tells him that Alison has been arrested for Mona’s murder – he doesn’t appear to care. Aria tells Mike that “Mona knew a lot of things about her and her friends, so she has been afraid to talk to him.” She explains that if Ali is behind bars then they don’t have to be afraid anymore. Mike agrees that he knew she hated Mona – but he is tired of everyone pretending that Mona was a saint because she is dead. He cries that he is sick of being told how sweet, nice, and smart Mona was – but there will never be anyone else like her…ever.

Emily rushes to the airport to say goodbye to Paige – she begs Paige to talk to her parents and tell them that she is safe now because Alison is in jail. Paige says that she doesn’t want to fight anymore, and she is tired of being afraid – she wants to save her energy to just live. Paige reveals that going to California isn’t that bad of an idea.

Spencer heads home, and the Rosewood police are waiting for her in the livingroom. They reveal that they think Alison set her up and she killed Bethany Young as well, so they are officially dropping the murder charges against her. Spencer cries tears of joy and rushes in to Toby’s arms.

Emily, Spencer, Hanna, and Aria all sit outside and Emily reveals that Paige is gone, and getting out of Rosewood was probably a good idea. Spencer says that they should all get out of Rosewood and have their own lives now that they can put “A” and Alison behind them. Fireworks begin going off in the sky and they spell out the letter “A” – sparks start falling on them and they rush inside.

The episode ends with Alison laying in bed in prison and tossing and turning.