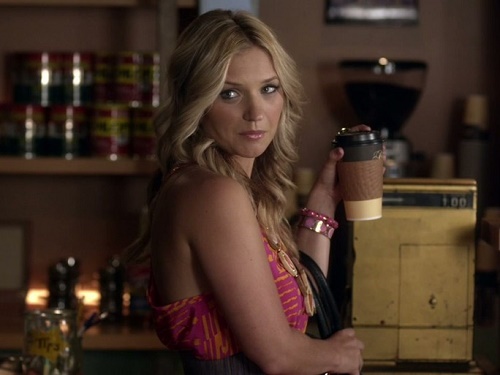 Pretty Little Liars fans are in an uproar today after ABC Family made some anti-transgender comments on their official Twitter page. Frankly, we’re still upset about the Pretty Little Liars season finale and big transgender reveal. Not because we have anything against transgender individuals but because it was a total cop-out by the writers and they decided to make a character transgender to explain away some of the nonsense storylines they created over the years. After six seasons of the show, the PLL writers revealed that Cece Drake was born a boy, Charles DiLaurentis; she officially transitioned when she was a tween and renamed herself Charlotte – then hid behind the alias Cece.

Obviously the transgender reveal shocked Pretty Little Liars fans during the season finale. But not as much as the hateful tweet ABC Family sent out on August 25, referring to the character Cece as an “It.” ABC Family shared a meme of Alison DiLaurentis (Sasha Pieterse) on Twitter and the picture stated, “He’s alive and he is coming for us.” ABC Family then captioned the meme, “He. She. It. #PrettyLittleLiars.”

The Tweet was quickly deleted, but not before PLL fans grabbed screenshots of it and began lambasting ABC Family for their hateful comments about the transgender community. It’s not usual for people to get confused about pronouns when referencing transgender individuals. Hell, Kendall Jenner still refers to Caitlyn Jenner as “He,” and Caitlyn is her parent. It’s one thing to get confused, but to call someone an “it” is totally hateful.

It’s safe to assume someone at ABC Family is on their way to the unemployed line right now. It will be interesting to see how the network tries to explain away their official Twitter account’s anti-trans comments, especially since the network is also home to the ground-breaking new reality TV show “Becoming Us.” “Becoming Us” follows the family of a transgender man, who transitioned into a woman with support from her wife and kids.

PLL fans are out for blood right now on social media, and we can’t say that we blame them. Do you think it was all a big misunderstanding? Or does ABC Family have some serious explaining to do? Let us know what you think in the comments below!