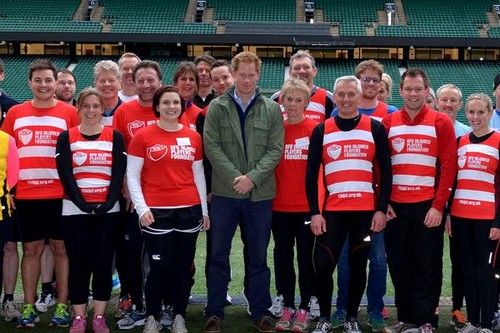 Is Prince Harry going to miss the birth of his royal niece or nephew? If Kate Middleton does not go into labor soon that may be the case. Prince Harry is currently in London, but only for a brief moment to carryout official royal duties. After he is finished with his royal endeavors, the prince will head back to Australia on Monday, April 26. As of this posting (April 26) Kate Middleton has not arrived at hospital nor has the Duchess of Cambridge’s labor been induced as far as we know.

Captain of the Royal Army, Harry, was in the UK for the London Marathon on Sunday, April 25. At the event he greeted volunteers and handed out the medals. We are sure that Prince Harry was also hoping to be in town for the birth of the new Royal Baby, however Princess Kate Middleton has not been in the hospital yet as of Sunday, April 26. Unfortunately, it looks like Harry will not get to meet his niece or nephew for a few weeks!

Prince Harry has been in Turkey with his father Prince Charles at the commemorations for the 100th anniversary of the Gallipoli campaign. Harry is currently on secondment to the Australian military through May, when he will carry out a short tour on behalf of his grandmother, Queen Elizabeth II.

Prince Harry looked happy in London as he met the volunteers and members of the St. John Ambulance charity. The organization provides medical support at sporting events and other open air events. After the event, Harry gave a presentation to the winners of the elite men’s and women’s races, as well as the IPC Athletics World Championships, which incorporates the wheelchair races.

This is not the first time that Harry has stepped up for a great cause. Some of the runners know the Prince because they are part of charities which make up the Duke and Duchess of Cambridge and Prince Harry’s Charities Forum.

Prince Harry welcomed his nephew Prince George the day after he was born at Kensington Palace, so for him to miss out on meeting his new niece or nephew for a few weeks would be a big deal for the family. We wonder if Kate Middleton will induce labor as many have anticipated her to do, so that the family can all be together in welcoming the new royal addition.