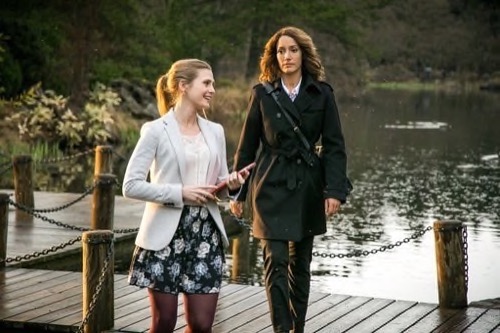 Tonight on TNT Proof airs with an all new Tuesday, June 16 season 1 premiere called, “Pilot,” and we have your weekly recap below. On tonight’s episode, Cardiothoracic surgeon Dr. Carolyn Tyler [Jennifer Beals] is hired by a terminally ill billionaire to investigate cases of life after death in an effort to prove the existence of an afterlife.

For those of you who don’t know, the show is about a brilliant yet troubled surgeon seeks evidence that death is not the end by studying cases of reincarnation, near-death experiences and hauntings.

On tonight’s episode per say TNT Synopsis “a terminally ill billionaire hires Dr. Carolyn Tyler (Jennifer Beals) to investigate cases of life after death in the series premiere of this drama about a brilliant yet troubled surgeon delving into reincarnation, near-death experiences and hauntings.”

Tonight’s episode of Proof looks like it is going to be great and you won’t want to miss it, so be sure to tune in for our live coverage of Proof at 9:00 PM EST! While you wait for our recap hit the comments and let us know how excited you are about the premiere of Proof?

Tonight’s premiere of Proof starts off with Dr. Carolyn Tyler trying to go for a jog. She receives a page from the hospital – and has to jog straight to work. She arrives at the emergency room and her patient is an 18 year old honors student that was shot in a drive-by, while Carolyn is trying to work on the teen he begins flatlining. She tries to massage his heart, but it doesn’t work, she cant bring him back. She orders one of the nurses to go get her some ice. The staff is puzzled and warns her that it is not an approved procedure, but they bring back the ice. Carolyn keeps massaging the kid’s heart while they cover his body in ice to try and slow the cardiac arrest.
After a few more minutes of trying to revive the kid, Carolyn gives up and calls the time of death as 11:20.

Feeling defeated she begins to take off her gloves and mask but before she leaves the room one of the other doctors shout that they have a pulse. The gun-shot victim has literally returned from the dead. Carolyn heads out into the lobby and finds the intern, Zed, that was questioning her about the ice. She orders him to never question her in the surgery room again.

Carolyn’s ex husband Peter corners her in the lobby, he says they need to talk about their daughter Sophie. Apparently something is going on with her, and she won’t open up to Peter about it, he thinks that she needs to have a hat with her mother. Charles pages Carolyn in to his office, he reveals that Internet tycoon Ivan Turring is considering making a huge donation to the hospital, but he has requested to meet with Carolyn – and not anyone else. Carolyn tries to argue but Charles reminds her that he can suspend her for using the ice on her gun-shot patient without permission.

Carolyn heads to Ivan’s house to meet with him. He reveals that he is dying from a deadly disease and won’t live to see the summer. Ivan didn’t call Carolyn to save him, he called her because he wants to know what will happen to him when he died. Carolyn is confused, Ivan explains that he needs real proof of what happens after you die. And, if Carolyn can deliver that proof he will leave his $10 Billion estate to her when he dies. Carolyn argues that what he is asking her to do is impossible, but Ivan has done a lot of research and he hands Carolyn a stack of files.

Carolyn turns down Ivan’s offer – before she leaves Ivan reveals that he knows her son Will died in a car crash last year. And, he knows that she nearly died in her own near-death experience. Carolyn is shocked, she demands to know how the hell he knows so much about her. Then, she storms out. Carolyn rushes to Peter’s house and demands to know what he told Ivan, she told him that she seen their son Will when she drown in private – he was never supposed to tell anyone else. Carolyn’s daughter Sophie overhears them talking. She can’t believe her mom meant Ivan Turring – she wants all of the details. Carolyn’s daughter can’t believe that she turned down the money, she thinks that her mom should at least try. She might be able to see her brother Will again.

Carolyn heads back to the hospital and checks in on her gun-shot patient, the boy tells her that when he was “dead” he saw things, it was like he was up on the ceiling and could see his own body and the doctors working on him. Carolyn doesn’t believe him, but he insists that he saw her and she was wearing running shoes. Carolyn convinces him that it was just his mind playing tricks on him, but he repeats the prayer that she was whispering under her breath when she was trying to bring him back to life.

The next day, Carolyn takes Zed with her to meet one of the people in Ivan’s files. A girl named Lilly was in a coma for 5 days, when she woke up she told her parents about the people from her family that she met in the other world while she was asleep. Her parents explain that Lilly never could have known those people, because they died before she was born. Lilly also told her parents that she used to float up to the ceiling and watch them talk to her while she was asleep.

Carolyn heads back to the hospital and pulls Lilly’s medical files. She tells Peter that she is just doing some research for a follow-up. Peter says that there was no way Lilly was dreaming because the EKG doesn’t show any signs of brain activity. Peter wants to talk about their divorce, he thinks that Sophie is mad at them for splitting up and they should tell her the truth that he was having an affair. Then maybe Sophie will understand why they split up.

Carolyn goes to a nursing home to meet Ruth, Lily’s granddaughter. Ruth raves that Lilly is a miracle child. Carolyn takes out some of the drawing that Lily gave her of the people that she met in the other world. One of them is a guy named “Paw Paw.” Ruth insists that she doesn’t know anyone named Paw Paw, but Carolyn tells her that she did some research on the internet and she knows there was another man in her life. Ruth confesses that she separated from her husband Bill for a few months and she went to a bar and met a man, she was so upset with her husband that she slept with the boy from the bar – and then he went away to Vietnam and was killed. Ruth reveals that Paw Paw is Lily’s real grandfather.

Carolyn goes back to the hospital and learns that Lily was just brought in. Apparently, she has another blood clot from her meningitis. Carolyn rushes in to the room and Lily’s parents tell her that they have opted not to get the surgery because there is a 70% chance that Lily won’t survive. Carolyn argues that without the surgery she will definitely die. Lily’s mom explains that they think God sent her back to them after the coma to let them know that she would be okay, and now it is time for her to leave for good.

Carolyn convinces Lily’s parents to let her do the surgery. Carolyn and Charles remove the blood clot, Lily will live – but there is no guarantee that she will not have another clot. Lily wakes up and Carolyn asks her if she got to see anyone in the other world again. Lily tells Carolyn that the people in the other world told her not to talk to Carolyn about them anymore. Carolyn pays Ivan a visit and agrees to work on his files and see if there is life after death, but she has a list of stipulations and demands – Ivan agrees to them all, he wants Carolyn to include his protégé Janelle in her work. Carolyn plans to star work ASAP, but warns Ivan that she is not quitting her job at the hospital.

Carolyn, Zed, and Janelle head to her house and get to work on organizing the research that they got form Ivan. Peter drops off Carolyn’s daughter Sophie, Carolyn asks her if they can have a movie night later and spend some time together, they order Indian food and watch old home videos of Will.