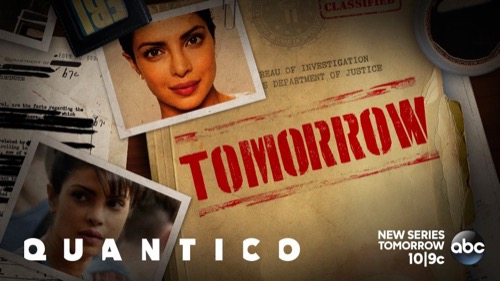 Tonight on ABC Quantico airs with an all new Sunday September 27, season 1 premiere episode, called, “Run” and we have your weekly recap below. On tonight’s episode the thriller about a possible sleeper agent mixed in among new recruits at the FBI Academy in Quantico, Va.

For those of you who don’t know, the show is a drama about FBI trainees at the FBI Academy in Quantico, Va., one of whom is a sleeper agent who will engineer a major terror attack on the U.S.

On tonight’s episode as per the ABC synopsis, “the thriller about a possible sleeper agent mixed in among new recruits at the FBI Academy in Quantico, Va., gets underway with the arrival of the agents-in-training to the base.”

Tonight’s season 1 premiere looks like it is going to be awesome so make sure that you tune in to our live coverage of Quantico at 10:00 PM EST!

Tonight’s episode of Quantico kicks off with Ryan Booth on an airplane he introduces himself to a woman seated next to him – he is on his way home from the Phillippines, she is on her way to Chile. Ryan and the woman wind up having sex in a rental car after their plane lands – she still won’t tell him her name, she explains that he is not her type because he is “too nice” and she can tell that he used to wear a wedding ring – she can also tell that he was lying about where he was flying from. Ryan is shocked that she has figured out that much about him, she hops out of the car and he still doesn’t know her name.

The next day, Ryan and the mystery woman head to the FBI Academy at Quantico – they are shocked when they recognize each other in their training class. An FBI agent swears them in, and then teases them that just because they made it in to the academy does not mean that “they are going to survive.” During day one of orientation, the assistant director Shaw takes the stage and warns them that the FBI academy is the toughest bootcamp and it is “life and death.”

The Quantico class is given their uniforms and badges, and fake guns with red handles. Then they head to their dorms The ystery woman that hooked up with Ryan reveals that her name is Alex, she introduces herself to her roommate Shelby. Meanwhile, Ryan is moving in with his roommate Simon. The rest of the class gets settled in to their rooms. Simon meets a Mormon named Elder Eric. Ryan bumps in to Alex in the hallway – she announces in front of everyone that she just had sex with him in the car 6 hours ago.

The Quantico class heads to their first class – they are ordered to pic a fellow trainee. They are given the files on each other. Their mission is to figure out the “missing piece” about their partner that isn’t in their files. Ryan and Alex wind up with each other’s files.

Fast Forward: A few months after graduation there is an explosion in New York City – Alex is on the scene. She and the other agents learn that it was an inside job, Alex is shocked that one of the people from her Quantico class is the terrorist. The FBI needs her to help them figure out who in her graduating class is the terrorist so that they can stop them before they strike again.

It’s Day Two at Quantico, they head to the track where Agent Fairman is waiting for them. They have to pass the physical requirements, then they head to the shooting range. In between their training sessions the Quantico class is on their cellphones, trying to get dirt on each other because the clock is ticking and they have to find the “missing pieces” to each of their files. Shelby is struggling, she can’t find any dirt on Caleb – he is a total “Golden Boy.” Meanwhile, Caleb is busy trying to find dirt on Elder Eric. Eric is freaking out, he obviously is scared that whatever Caleb finds could get him quicked out of the school.

It’s time for the truth to be revealed. The Quantico class will get a chance to question their partners – and administer a polygraph test to them to confirm their findings. Simon heads in to the interrogation room with Shelby first. He starts asking her about her family, she reveals that her parents are dead – they were killed when she was 16 years old. She carries a piece of a plane with her, it’s a piece of the plane that her parents were killed on when it was flown in to the towers on 9-11.

Nimah is up next, she reveals that Simon is a gay Jew – but he left his family and lived in Zionist Gaza for 4 years. Ryan questions Alex, he reveals that she has “issues with men” and she didn’t even grieve when her father passed away a few years ago. Alex confirms that her father was a drunk, and her mother shot and killed him in self-defense.

Later that night, Shelby finds Caleb on the roof crying. He sobs that he never meant for Eric to snap like that. He admits that both his parents are FBI agents, and they had to pull strings to get him in to Quantico. He barely passed his entrance tests, and he is afraid that he is going to get kicked out of the academy. The next day Shelby stops by Caleb’s room and he is gone – apparently he was kicked out by the director and sent home while everyone was sleeping. Nimah heads to her single room, it’s revealed that she has a twin sister – and they have been swapping places the entire time.

Flash Forward to the bombing in New York City – the FBI thinks that Alex is the terrorist. They search her apartment, and she swears she is innocent. They find Agent Ryan Booth lying on the floor of Alex’s apartment with blood on him, he appears to be dead. Alex watches the search on the video camera, and is obviously shocked. They arrest Alex and rush her out of the train station for the murder of Booth and the terrorist attack. Alex is thrown in to the back of an FBI van, Director Miranda is driving – she tells her that she knows that she is innocent, she gives her a key to get her handcuffs off while she drives through the streets, trying to lose the police cars that are chasing them. Miranda crashes the van and flips through the streets – she is surrounded by officers with guns when the van stops, but Alex makes a clean getaway.