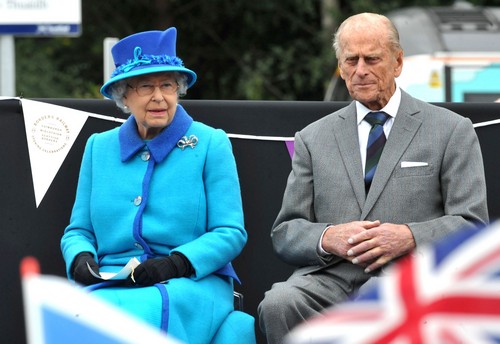 Queen Elizabeth may soon announce her retirement but don’t expect to see Prince Charles and Camilla Parker-Bowles crowned King and Queen. Alleged palace sources say that the Queen’s retirement comes with one very important – and historic – stipulation – Prince Charles will step aside and Prince William and Kate Middleton will the next to sit upon the throne of England as King and Queen.

Royal insiders told OK magazine that though Prince Charles was livid and flew into a rage when the Queen told him of her decision and the accompanying provision, the 66-year-old Prince of Wales has come to terms with the fact he will never be crowned King of England. The Prince of Wales cannot escape the fact that he and his wife Camilla Parker-Bowles are the least-liked members of the Royal family. Camilla has been the most hated woman in England for decades – you can’t have an affair with the Prince of Wales while he’s married and expect to be popular.

Following the tragic death of his ex-wife Princess Diana in 1997, many believed that the Charles should step aside as the direct heir to throne in favor of his teenage son William. Royal biographers have written that Prince Charles absolutely refused – declaring he had already given up too much in life and would not surrender his birthright. The demands that Charles be bypassed in favor of Prince William began again in 2005 when the Prince of Wales married divorcee Camilla Parker-Bowles – his long-time lover. This is what people want – for Charles and Camilla to be bypassed and William and Kate to be crowned King and Queen.

The Duke and Duchess of Cambridge have two young children and are approaching their fifth wedding anniversary – an eerie similarity. Princess Elizabeth was mum to two toddlers and just months from her 5th wedding anniversary to Prince Philip when her father King George VI died in February 1952. Prince Charles was 3-years-old and Princess Anne only 18 months old at the time.

William and Kate’s coronation will purportedly take place not long after Queen Elizabeth’s 90th birthday and will cost $1 billion or more. Charles and Camilla will sit amongst world leaders and celebrities at Westminster Abbey to witness as the Duke and Duchess of Cambridge are crowned King and Queen. Sources reveal that even though this is an historic even filled with pomp and circumstance, the Duke and Duchess are “keen for George and Charlotte to play a part. They want the event to be joyful and family-oriented,” the source explained. Furthermore, the Palace insider says that the children will ride in the horse-drawn carriage from Buckingham Palace with William and Kate Middleton and be front and center as their mum and dad are anointed with holy oil by the Archbishop of Canterbury.

Are the rumors true? Has Queen Elizabeth decided to step back from the throne of England? Has she in fact issued an order to her son Prince Charles that he surrender his place in history to his son Prince William – or will the Prince of Wales submit a counteroffer allowing him to be crowned King if he then abdicates the throne within five years’ time? This would at least allow Charles to take his place in the history books as a King of England – much like his great-uncle King Edward VIII.