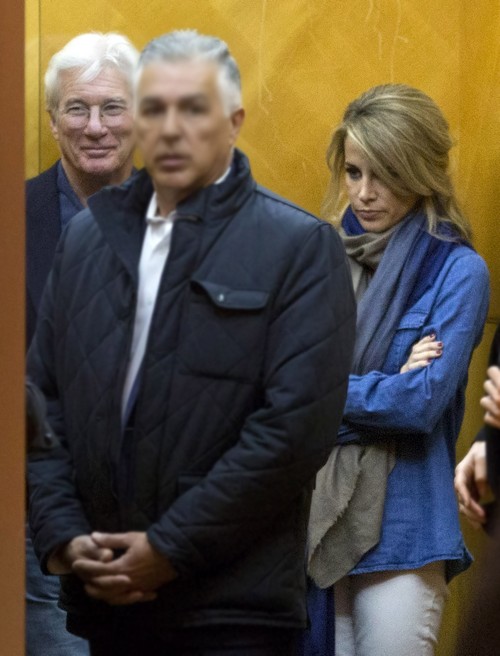 Is Richard Gere demanding Carey Lowell end the divorce drama? Gere reportedly desperately wants to marry Alejandra Silva and start a family with the Spanish beauty. But is the actor willing to give up more than half his fortune for Silva?

Carey Lowell is allegedly furious that the actor has moved on with a gorgeous woman half his age. Lowell hasn’t publicly said anything about Richard’s most recent relationship, but insiders say the former “Bond Girl” has made every attempt possible to stall the divorce.

Just as Gere gives in to all Lowell’s demands buzz is that she asks for more and won’t back down. Some speculate that Carey didn’t want the divorce in the first place – Richard was the one who made the decision to end the marriage.

Gere and Lowell separated after 12 years of marriage and quickly reach a custody arrangement for 15-year-old son Homer James Jigme Gere. But it’s the $100 million fortune that’s at stake and Carey isn’t walking away from the table without her fair share.

By holding Gere’s feet to the fire, so to speak, Lowell is preventing the actor from marrying 32-year-old girlfriend Alejandra. Richard, 66, is allegedly petrified that if the divorce isn’t final soon Alejandra will call it quits.

Insiders disclosed that Richard Gere can’t bear the thought of Alejandra Silva leaving. Friends revealed to the National Enquirer that Gere not only wants to get married as soon as possible, but plans on giving Homer and Alejandra’s son Albert a brother and a sister before his 70th birthday.

Alejandra’s divorce from Govind Friedland, son of an American mining billionaire, isn’t final yet either, despite the fact that they have been separated as long as Lowell and Gere. Alejandra isn’t interested in Richard’s money – an inside source reveals that Silva comes from an extremely wealthy family.

“[Alejandra] isn’t looking to be famous, they’re perfect for each other,” the informant divulged. And Alejandra’s bound to get a big fat divorce settlement, right?

The third time might be the charm for Richard Gere – that’s if the actor/activist can extract himself from Carey Lowell. It just may cost Richard big bucks to make Carey go away. If Gere is that anxious to marry Alejandra Silva then parting with $50 million – or more – may be well worth it.

Richard Gere and his girlfriend Alejandra Silva spend Thanksgiving around town in Madrid, Spain on November 26, 2015. The pair visited a church before looking at art at the Thyssen Museum. FameFlynet