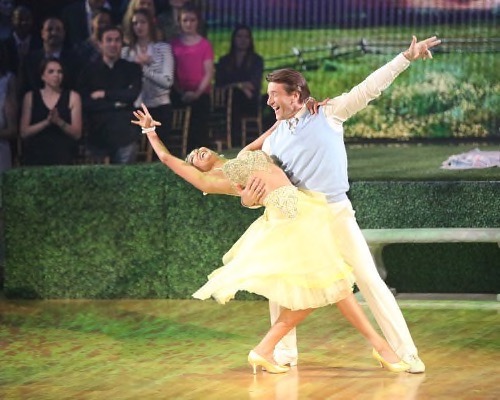 Tonight on ABC Dancing With The Stars returns for a third week with Latin Night. Robert Herjavec and his professional dancer Kym Johnson danced a Rumba to “How Long Will I Love You” by Ellie Goulding. On tonight’s episode the eleven remaining celebrities debut a new dance style, on what’s always the hottest night of the season. Did you watch tonight’s episode? If you missed it we have a full and detailed recap, right here for you. Did you miss any of tonight’s performance videos? If you did we have them all, right here for you!

On last week’s premiere episode of DWTS Robert performed a Foxtrot and the judges scored Noah a 28/40 for his performance. Carrie-Ann loved his performance and had this to say, “You guys looked like a fairytale. I was really impressed with the routine.”

Judges’ comments: Bruno: “I really felt it, it was beautiful.” Carrie Ann: “Your chemistry is so ridiculously good, I want you to provide a firmer frame for Kym though and sustain your movements.” Len: “You are middle of the pack at the moment, you need more hip action and more fluidity.” Julianne: “I disagree with everyone, this was one of your best performances ever. Your placements was amazing, you were leading her and it was awesome.”

Watch the video below and let us know what you think, do you agree with the judges comments? Do you think Robert did enough to avoid elimination next week? Sound out in the comments and let us know your thoughts?