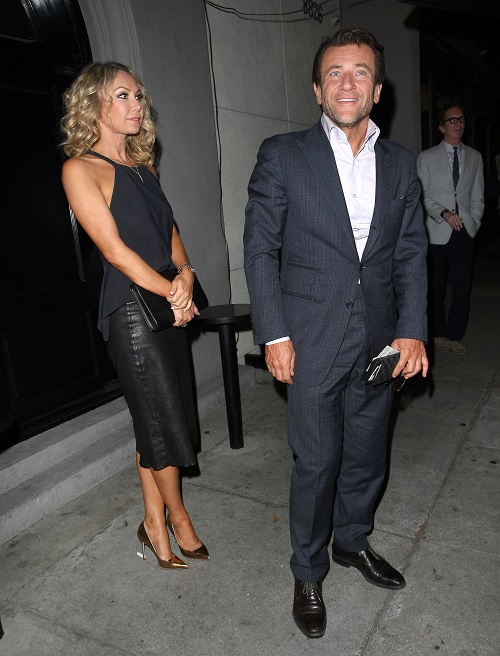 Shark Tank star Robert Herjavec is definitely hooking up with his Dancing With The Stars partner Kym Johnson, although the couple won’t confirm their relationship. But they aren’t exactly denying it either. Robert and Kym’s chemistry on Dancing With The Stars is undeniable, and doesn’t stop on the dance floor – the couple has been spotted on romantic dates together and are constantly gushing in interviews about how amazing each other is, and behind the scenes of DWTS they can’t keep their hands off from each other!

Shark Tank’s Robert Herjavec just got out of a messy divorce from his wife Diane Plese, and before he joined Dancing With The Stars he even confessed that he was so depressed when his marriage was over that he contemplated committing suicide and jumping off a balcony. To say Robert Herjavec was vulnerable when he partnered up with Kym Johnson would be an understatement. The fact that Robert was desperate for love and the 14 year age difference he shares with Kym Johnson has everyone speculating that the pro dancer may be taking advantage of the millionaire.

Robert Herjavec and Kym Johnson are super cute together, and we want to believe more than anything that their connection is real – but Robert’s close friends and ex-wife Diane Plese are not buying it. Sources close to Robert’s ex-wife tell CDL that Diane sees right through Kym’s façade. The insider explained, “Diane does not wish any ill will on Robert, and she wants her ex-husband to be happy. But, she knows that he is just going to get his heart broken, and after his dark depression over the divorce, she is scared for their kids’ sake that Robert will want to take his own life again.”

Have you been watching this season of Dancing With The Stars? Do you think that Robert and Kym’s relationship is the real deal? Or is she just using the Shark Tank millionaire because he showers her with lavish gifts and is boosting her celebrity status? Let us know what you think in the comments below!