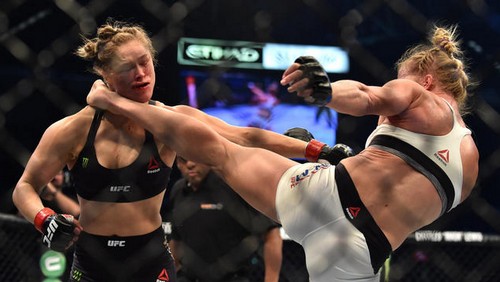 Ronda Rousey is allegedly depressed and in hiding after being knocked out by Holly Holm during their UFC Championship fight – a fight in which Ronda behaved like a low-class bum and was destroyed right from the opening bell. The monumental upset – this was Rousey’s first MMA lost – caused quite a stir on social media and a few opponents and celebrities are mocking and tormenting Ronda Rousey.

Brazilian fighter Berthe Correia, who was KO’d by Rousey in only 34 seconds in the fighters’ August match-up, celebrated Holm’s win with a post on Instagram that mocked Ronda. A photo of Floyd Mayweather with the caption, “Hey! Ronda Drowsy,” and the comment, “[Ronda] said she was going to win Floyd and any man.”

Rapper 50 Cent also took pot shots at Rousey on Instagram – saying, “LMAO FLOYD TOLD ME TO POST THIS, he want me to do the dirty work.” The Instagram photo shows Ronda edited into an iconic image of fictional boxer Rocky Balboa holding a dying Apollo Creed in the movie “Rocky IV.” Rousey started a bitter war of words in 2014 with Mayweather when she declared, “I don’t even know who [Floyd] is” when asked about the undefeated UFC star.

Lady Gaga got in on the mocking and tormenting of Ronda Rousey as well. The singer also posted a photo on Instagram – this one of Holly Holm delivering a punishing blow to Rousey’s bloody face. The comment from Gaga accompanying the photo says, “THATS WHAT YOU GET FOR NOT TOUCHING GLOVES!” Gaga was referring to Rousey’s poor sportsmanship when refusing to touch gloves – Holm put her gloves out and Rousey just backed up.

Rousey posted a screenshot note from her iPhone, “I just wanted to thank everyone for the love and support. I appreciate the concerns about my health, but I’m fine. As I had mentioned before, I’m going to take a little bit of time, but I’ll be back.” Is Ronda depressed and in hiding after losing her first MMA fight?
Many of Berthe Correia’s, 50 Cent’s, and Lady Gaga’s followers on Instagram commented that Rousey got what she deserved after running off her big mouth. During the pre-fight weigh-in Ronda cussed at Holly, and then called Holm a fake and a phony.

Ronda Rousey will have a chance to win back the UFC championship title from Holly Holm – a rematch is scheduled for March 20, 2016. Until then, it seems the MMA fighter has taken a hiatus and is in hiding.

What do you think about Ronda’s behavior at the pre-fight weigh-in? Do you think Rousey is depressed after being defeated by Holm? Do you think it’s fair that opponents and celebrities are mocking the UFC fighter on social media?

THATS WHAT YOU GET FOR NOT TOUCHING GLOVES!