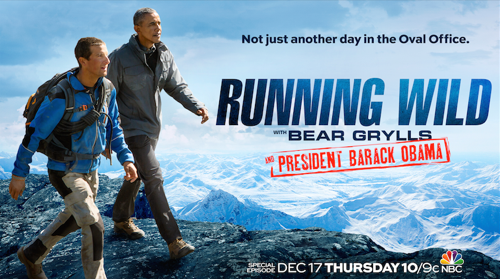 Tonight on NBC their new show Running With Bear Grylls airs with an all new Thursday December 17, season 2 episode 9 called, “President Barack Obama” and we’ve got your recap down below. On tonight’s episode in a historic special edition of “Running Wild with Bear Grylls,” Bear takes President Barack Obama on an adventure in the Alaskan wilderness.

For those of you who don’t know, the show is based on the same survivalist concept as the rest of Grylls shows, such as Man vs Wild, but with a celebrity joining him for the journey. The journeys include skydiving into the Catskill Mountains and climbing the cliffs in Utah.

On tonight’s episode per the NBC synopsis “in a historic special edition of “Running Wild with Bear Grylls,” Bear takes President Barack Obama on an adventure in the Alaskan wilderness. We will see the Commander in Chief as we’ve never seen before, as the two men traverse a dense forest and walk across a glacial outwash at Alaska’s famed Exit Glacier, where they observe the remarkable effects of climate change first hand. From wild salmon and catkins tea made with melting glacial water to s’mores, Bear gives the President a true taste of Alaska. Their off-the-script chat reveals the President’s thoughts on his official duties, family life at the White House, parenthood and his own faith.”

Running with Bear Grylls airs tonight on NBC at 8PM EST. In the meantime, sound off your comments and let us know how excited you are for tonight’s episode. We’ll be recapping all of the action right here for you.

#BearGrylls has President Obama on the show tonight. They are in Seward, Alaska. Bear says he never thought he would meet the President and says when the Commander in Chief calls, you go. He is in a chopper and says the Secret Service shut down the air space.

He has to hop out of it onto the snow. We see Obama talking about how he’s in “the bubble” and the Secret Service keeps him out of danger but it’s confining. He says to be with Bear in the woods is great and doesn’t get any better.

Bear goes to meet POTUS. Obama says he can probably put up a wobbly tent and maybe can make a fire and that’s it. Bear makes it to the point to meet and says he’s nervous. He says to take the leader of the free world is unimaginable.

Obama walks up on him and they shake hands. Obama says he never gets to travel and says he’s never set foot in the Alaskan wilderness. He’s happy to be out of the Oval Office and not in a suit. They come to see the Exit Glacier.

Obama says he’s not in that good of shape but for a President is in pretty good shape. He hands Obama some bear spray and they head out. Obama says he watches his show. They decide to hike up through an older forest.

Bear says bears hang around there and they have to watch out for the animals. Obama talks about growing up in Hawaii and the beautiful mountains. They spot some bear fur on a branch. Bear says it’s a brown bear.

Obama says the hair is more delicate than he talks. Bear says they have to be careful then says bears are most dangerous when feeding, protecting their young and when you surprise them fornicating. Obama says people too.

Bear says if you intrude on their territory, you back up while making eye contact. He says if they come into your territory, you act big and make a lot of noise. Bear says they need to make noise in the forest so the bears aren’t surprised.

Bear says his kids told him to ask Obama if anything scares him. He says when his wife is mad and says she gives him a certain look. Obama says he doesn’t have a lot of phobias but is usually game. He asks what Bear is scared of.

He says bad cocktail parties. They make it to a rockfall. He talks about how rain freezes and cracks it. He finds a thin piece of rock to use to cook him lunch. Obama is worried what he will try to feed him.

Bear spots some leaves they can use for tea then climbs up and finds them some more leaves. They are catkins. They move on. Bear shows him a view of the glacier and the Harding Ice Field. We see Obama and Bear so a selfie up on a rock near the ice field.

Obama doesn’t know how to use the phone and it’s locked. He has to yell to his Secret Service guy for the passcode. Obama says he doesn’t have a smartphone and had to borrow one. He keeps screwing up with the phone and Bear laughs at him.

Obama says for security reasons he can’t have a smartphone and that’s why he’s clueless. Obama checks out the cold water from the glacier while he talks about how his daughters think he’s boring.

Bear tells him don’t drink it or he’ll get diarrhea. Obama says the water is so cold because of the ice.

Bear shows Obama how to light a fire. They work on the fire and he gets it going fast. Bear says he’s good at everything and Obama says he will never be the guy who climbs Everest. They prepare to make tea.

Bear talks about spending time with his kids. Bear finds a fish half eaten by a bear. He says they ate the high fat content. Obama talks about how he doesn’t think the White House should be ostentatious.

They talk about their kids and then Bear’s interest in outdoorsy stuff. Bear says his dad was a commando type guy. Bear says he was the kid that always climbed. He says he always pursued his interests and has been super lucky.

They try the salmon that Bear cooked and Obama says it’s tasty but Bear says you can smell the bear breath on it. Bear talked about how the security people watched him carefully about what he ate and says Obama has a presidential food advisor to keep him safe.

Obama then makes s’mores with Bear. Then Bear says there was a petition asking for Obama to drink pee. They talk about that for a bit. Obama says he hopes he doesn’t ever have to drink pee. Then they drink their catkins tea.

Bear asks him to sign an Obama souvenir – it’s a bottle opener he got at the airport. They say a prayer together then talk about scaling the face of the White House together. Then Obama heads out.