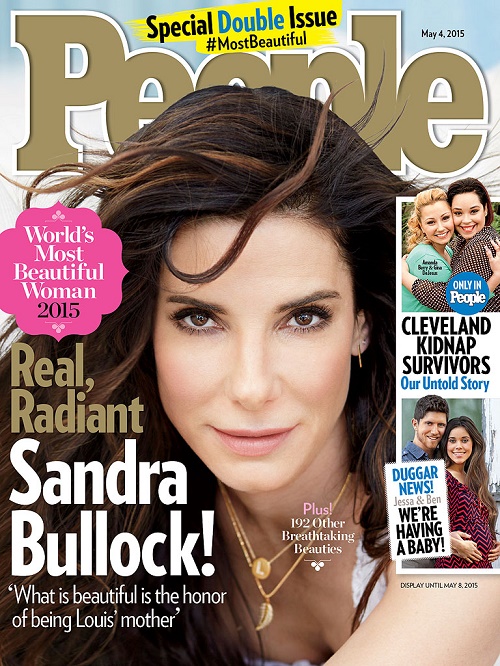 Sandra Bullock has been crowned People Magazine’s Most Beautiful Woman of 2015 in their annual Beautiful issue. However, Sandra Bullock herself found the whole thing ridiculous when she heard about it. She tells People, “No, really. I just said, ‘That’s ridiculous.'” However, she also adds that her definition of beauty is very different from most people’s in Hollywood, explaining, “Real beauty is quiet. Especially in this town, it’s just so hard not to say, ‘Oh, I need to look like that.’ Be a good person, be a good mom, do a good job with the lunch, let someone cut in front of you who looks like they’re in a bigger hurry. The people I find most beautiful are the ones who aren’t trying.”

Well, Sandra Bullock does live in Hollywood… However, it’s nice that People Magazine is actively trying to put women of color and women older than the age of 30 on their covers. The past few years ‘most Beautiful’ honor has gone to Lupita Nyong’o, Beyonce, Gwyneth Paltrow, and Sandra Bullock, which shows at least SOME level of diversity in their choices. Knowing Hollywood’s penchant for sticking to the same old group of starlets for everything, it’s good to know that one of the most mainstream magazines is trying to look outside the status quo – although in all honesty, Sandra Bullock is still a very ‘safe’ choice.

What do you guys think about Sandra Bullock receiving People Magazine’s Most Beautiful of 2015 honor? Do you think she even cares about it, especially since there’s no way it’ll make a lick of difference in her career? Or do you think that since she’s over 50 years old, she does find it an ‘honor’ to be given that title? The rest of People’s ‘Most Beautiful’ will be revealed in the actual issue, which is out on newsstands today.