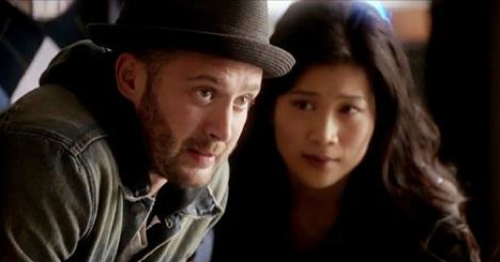 Tonight on CBS Scorpion starring Elyes Gabel continues with an all new Monday January 5, season 1 episode 13 called, “Kill Screen” and we have your weekly recap below. On tonight’s episode and winter premiere, Team Scorpion help Ralph [Riley B. Smith] when he is questioned by the FBI, after his dark Web game play inadvertently reveals the location of a CIA safe house and results in the murder of some CIA operatives.

On the last episode, team Scorpion tried to save a boy on Christmas Eve when he got trapped in a beach-side cave and the rising tide threatened to drown him.

On tonight’s episode per say the CBS synopsis, “team Scorpion must help Ralph when the FBI questions him after his dark web game play inadvertently reveals the location of a CIA safe house and results in the murder of CIA operatives.”

This is definitely one series that you don’t want to miss. Don’t forget to stay tuned to Celeb Dirty Laundry where we will be live blogging every episode of Scorpion’s first season.

Tonight’s episode begins now – Refresh Page often to get the

On tonight’s all new episode of “Scorpion” it turns out Ralph did something he shouldn’t have. It seems he went on the computer without his mother’s permission and he started playing around with what he thought was just a game. And, well, his game play end up having some real life consequences.

The Scorpion team, which usually tends to be on top of these things, hadn’t found out about Ralph until the next morning. It looks like Walter had gotten caught up with his latest project at the time so sadly no one had found out about Ralph’s nightly activities until after two CIA operatives were reported in as dead.

As the story goes, the CIA has hideouts all over the world but eventually someone got their hands on that information and ended up turning the information into a prize designed as a reward if you complete a difficult video game. Ralph and the drug cartel that attacked one of the hideouts are the only two people that ever made it to level ten. So now the CIA wants to know how Ralph was able to get his hands on the game in the first place.

Apparently, they think Ralph must have been a designer or at least knew the designer of the game so they want to hold him for questioning. But at the end of the day he’s still just a kid. He found the game after Walter had introduced him to the dark net and the reason he made it to level in a matter of hours while the other guys needed months is because he’s smart. As in a miniature genius!

But Ralph did get into contact with the designer. They chatted briefly over the internet. And really was nothing. He merely mentioned to the designer that one of the levels was a tad too easy and helped him make it harder.

With that kind of information, Ralph could technically be held responsible for the murder of two government agents. Hence it’s imperative the team clears his name and the only way they can do that is to find the game-maker.

Yet what they came across was a kid that had no idea his spy game was being used to capture real spies. Nate it seems just wanted to create a really great game but his partner on the other hand wanted to find the perfect patsy. And he did so when he offered his services to a teenage designer.

Nate thought he was working with a guy called Calvin when instead his partner Donald Chen is someone with a record. And it definitely well earned.

The team was going to use Nate to extract a confession but Donald caught on to them and before anyone knew it he had stabbed Nate and went on the run. But Luckily Walter knows how they capture him though Paige is not going to like it.

Ralph’s dad is back and lately he’s been pestering Paige. He thinks they should distance their son from Scorpion. He say the organization has only gotten their son into trouble and that they might also be risking Ralph’s childhood by teaching things like finding the dark net.

So, as he tries to convince her to distance herself and their son, the team is asking if Ralph can go back into the game.

Donald and Nick had designed the game based off of their lives so the best way to capture him is to use someone that has gotten to know the game from inside out. And without Nick (he was stabbed remember), they needed Ralph.

Paige allowed Ralph to help despite her reservations and he managed to keep the team alive during their manhunt. That did lead to Donald’s takedown. But his actions didn’t help his father change his mind. Drew doesn’t care that his son is a hero – he merely wants his son to be a kid for as long as possible. So he told Paige he was going try his hardest at his job in Portland. That way, in the future, they could one day be a family again where Paige doesn’t have to get involved with Scorpion.

And as for Walter, he learned a very important lesson. Before he was focusing on just having fun with Ralph yet he realizes now that he shouldn’t have lost sight of being the adult in their relationship. Toby had convinced him not to forget it.

But there are times the team can joke around and after they found an old video of Sylvester at a gaming event – they did let off some steam.