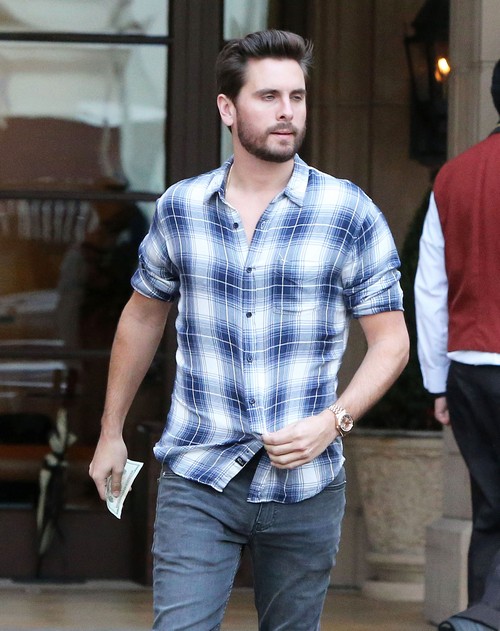 Scott Disick is allegedly threatening Kourtney Kardashian he’ll reveal awful secrets about Kendall Jenner and little sister Kylie involving drugs and pregnancy scares. Keeping Up With The Kardashians star Scott Disick, the longtime boyfriend and father of Kourtney Kardashian’s three children is ready to tell all! After months of getting sober only to fall off the wagon again and getting caught up in cheating scandals – Scott Disick has worn out his welcome in Kourtney Kardashian’s home. But, The Lord Disick is not leaving without a fight. Scott has been the scapegoat for all of his relationship trouble with Kourtney, not to mention he has put up with all of her family’s drama as well. He has more dirt on the Kardashians than we could ever dream of digging up, and Kourtney should probably think twice before throwing him out – because he could completely destroy the Kardashian name and brand.

According to the February 16th edition of OK! Magazine, “After eight years with the Kardashians, Scott Disick is ready to reveal their most scathing secrets. Scott wants revenge for all of the crap he has endured. He feels like he has been intentionally made to look like the “bad guy” to boost ratings. Scott has told Kourtney that if she tries to take their kids and their money, he will let loose enough information humiliate her to take down her entire family.”

So what secrets does Scott Disick plan to leak about the Kardashian family? More like, what doesn’t he plan to leak? According to OK! Magazine’s inside source, Scott plans to expose Kourtney Kardashian for the hypocrite that she really is. Apparently, Kourtney isn’t half the organic health nut she pretends to be – and she smokes and drinks almost as much as Scott does!

Also, OK! Magazine’s source goes on to reveal that Kendall Jenner allegedly has a serious drug problem and dabbles in cocaine and prescription drugs – and the rumors about Kylie Jenner’s pregnancy scare are 100% true and Scott plans to tell the world about it, and he has tons more dirt – this is just the tip of the iceberg.

Can you picture Kourtney Kardashian boozing and smoking after all of the complaining she did about Scott? Do you believe that Kendall really has a cocaine problem? Imagine what kind of dirt Scott plans to leak out Kim Kardahsian and Khloe Kardashian. Let us know what you think in the comments below!

Reality star Scott Disick is spotted leaving the Montage Hotel in Beverly Hills, California on January 30, 2015. Rumor has it Scott has moved in with Khloe Kardashian while he and Kourtney Kardashian take some much needed time apart. FameFlynet