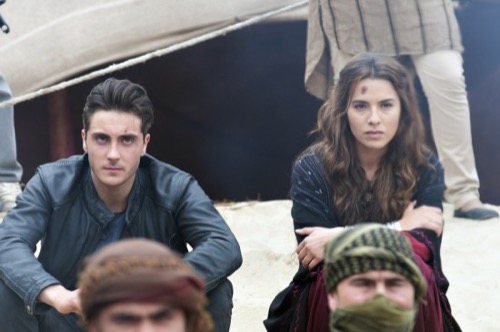 Tonight on MTV Scream airs with an all new Tuesday August 18, season 1 episode 8 called, “Ghosts,” and we have your weekly recap below. On tonight’s episode, Emma (Willa Fitzgerald) is shaken by another death.

On the last episode, Emma raced to save a friend from the killer’s dangerous game of hide-and-seek.

On tonight’s episode per the MTV synopsis “Emma is shaken by another death; and uncovers a secret from the past.”

After Will died so horrifically last week, Emma just locked herself away. She refused to speak to anyone or see anyone. And the one thing she chose to do, in self-exile, was listen to her father’s tapes from when he was in therapy.

She found those tapes at the bowling alley and the killer is using them to further his own agenda. Which is to isolate Emma from the people that care about her. Starting with her mother who he seems to really hate.

Those tapes were played at the bowling alley because he wanted Emma to hear them. And, consequently, he let her in another big secret that her mother was hiding. For it looks like her mother was still lying to her about what had really happened with Brandon James.

The truth is Maggie was more than just friends with Brandon. In fact it appears that she had even slept with him back in the day and that Emma’s father had found out about it. So that could have led to the fight that had started it all and sent Brandon on his murderous rampage.

According to legend, Brandon had gotten attacked by a group consisting of Emma’s father and the then teenager’s friends after he had frightened Maggie. Then out of revenge for being treated so by the “popular” crowd – he began killing them off one by one.

So, although its urban legend, there must be some truth in there and the killer keeps pushing Emma to find it. But his way of telling her the truth always ends up scarring her. And this time Emma doesn’t look like she can recover from Will’s death.

Not when she was the one that had inadvertently caused it by stepping on the trip wire and was afterwards sprayed with the blood of a young man that she once cared for.

Thus, lately, people have been walking on eggshells around Emma and they’re doing their best not to upset her. However their efforts keep reminding her about what happened. And all she wants is to forget.

Emma has been seeing Will everywhere. And it’s not the Will she wants to remember. Actually, she’s been seeing images of him after the farm equipment had split him to two. So lately she hasn’t been sleeping well because she’s been too afraid to close her eyes.

And either the lack of sleep or what she witnessed has caused her to freak out at the oddest times.

She had run from Will’s ghost while she was at school and recently she began to hear the “Daisy” song even no one else can. So ultimately her mom wanted her to go to the hospital and get her checked out. And it was as she was at this low point that Emma’s father reentered the picture.

Her father claimed he wanted to be there for her and support her. But Emma initially reaction was to push him away. She knew she couldn’t afford to have one person that she cared about walking around town with a killer on the loose.

Yet, when sometimes had passed, Emma had unfortunately come to the conclusion that she hadn’t seen her father. He was simply an illusion to get her to remember something from her pass. And what she wanted to recall was a fight between her parents.

Emma’s last fight was about a baby that her mother didn’t want. And once Emma started to think about it, she knew that it was her that they were talking about. It was another child and thereby another secret.

Audrey supplied her with footage of the hospital they had broken into. And Emma saw ultrasounds up on the board they had overlooked.

Thankfully, though, Audrey didn’t ask a lot of questions. She was busy at the time looking into their teacher with Noah. And they finally found something on their “Mr. Branson”.

They knew he was using a fake name but had no idea that Seth Branson used to go by the name Palmer. That is until he was caught in a torrid affair with one of his students, an 18 year old so nothing illegal, and the same student was later found dead.

Palmer was suspected of her death but nothing ever came from it. So with this information about their teacher’s past, Audrey and Noah went looking through Branson’s things. And eventually they came across a knife.

Thus their little investigation came to end and they quickly the sheriff to come take over.

Sheriff was hesitant about listening to two kids but he did and then he put out a bolo on Branson/Palmer. However, Branson was in technically in the middle of something when the police came looking for him. And being found with Brooke didn’t do him any favors.

Brooke had asked to meet him because she needed to get over what happened with her dad. Piper Shay had handed footage of the Mayor dragging a body and that sparked an investigation.

Yet, there is good news. Mayor Maddox has been cleared of the murders. And it looks like he didn’t kill his wife. He only buried her drug pusher that had accidentally OD in their guest room while his wife was at rehab.

So Brooke got her mother back then lost her father. And that’s why she needed Branson at that very moment. She wanted a way to forget everything else. But ended up screwing his chances with the police in the process.

Especially as the police later found them together right after Brooke had a near escape from the killer, Branson had left for her a sec to go check out a sound he heard, and was seen bleeding.

As for Emma, she confronted her mother about the ultrasound and she was right. It was her mother’s ultrasound from when she had gotten pregnant by Brandon. And Maggie did give that baby up for adoption.

But is this child of hers back in their lives? That’s the most important question here!