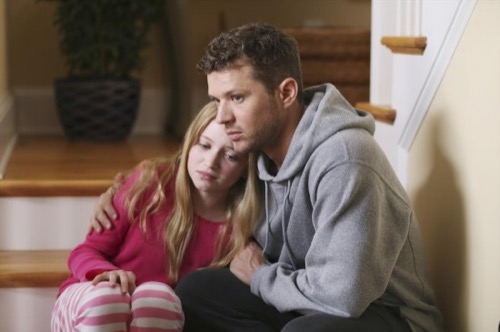 Tonight on ABC Secrets and Lies premieres with an all new Sunday March 1, season 1 Premiere, called, “The Trail; The Father,” and we have your weekly recap below. On tonight’s episode, in the premiere of this drama series, Ben  [Ryan Phillippe] Crawford becomes the prime suspect in a murder after finding the body of his neighbor’s young son, and he and his family are engulfed in a media firestorm after a detective’s routine questioning.

Secret and Lies is about a man becoming the prime suspect in a murder after finding the body of a young boy.

On tonight’s episode as per the ABC synopsis, “in the premiere of this drama series, Ben Crawford becomes the prime suspect in a murder after finding the body of his neighbor’s young son, and he and his family are engulfed in a media firestorm after a detective’s routine questioning. In the second hour, Ben starts to conduct his own investigation, and the deceased boy’s mother suspects his estranged father may be responsible for his death.”

Tonight’s season 1 premiere looks like it is going to be intense so make sure that you tune in to our live coverage of Secrets and Lies at 9:00 PM EST! While you wait for the recap, check out a sneak peek of tonight’s episode below!

Ben Crawford’s life was turned upside down one morning when he found his neighbor’s son’s body on the same route he jogs pass. It was an extremely unfortunate occurrence for anyone to experience, but what turned this one event into something more is that from the very beginning, the detective that was assigned to this case appeared to have taken a special interest in him. And it’s safe to say that Detective Andrea Cornell didn’t necessarily try to hide where she was going with her investigation.

She immediately asked for his clothes and that was before she even heard that Ben had tried to resuscitate the little boy. And when she did find out then her main concern was that he moved the body. Yet, from the onset, Cornell seemingly suspected Ben and it only got worse from there.

The death of a little boy drew media attention to the small suburban neighborhood and soon cameras were all over the place. The various media outlets were asking everyone questions and they each definitely wanted to be the ones to win an interview with the jogger that had actually found little Tom Mullen. But Ben simply didn’t have time for any of it.

Prior to finding the body, he and his wife have been having their ups and downs. And the night before, she had kicked him out. So he had gone drinking with his friend and the two of them eventually returned to the house in the early morning.

So if it’s not thing, it’s another. And Ben was overwhelmed by it all. He was trying to work on his marriage and grieve at the same time. Yet Cornell, obviously trying to make his life as difficult as possible, decided to throw fire on the flame.

She wanted Ben to come in and answer some more questions, but she had the police escort him to an interview instead of merely asking him to stop b. And something like that sends shockwaves. Especially as the entire thing played out in front of the cameras.

Journalists are like sharks. If they smell blood in the water then it’s open season. And so when they saw Ben getting “escorted”, they quickly changed their line of questioning. They then started to ask the police if they believe they’ve now found the culprit.

And, though, his neighbors have known for years – even they began to look at him with suspicion as he was taken in to the police station.

Then again, as one can never tell, Ben might just be someone that deserves suspicion. At the police station, a lawyer friend of his that was called in by his wife had showed up and at the time he advised Ben not to give up his DNA. So Ben didn’t but that was as far as the advice had extended. In other words his friend had said nothing about hiding certain objects. Like what the police believe to be the murder weapon.

And so when Cornell asked him about a flashlight he must use in his line of work as a painter, there really was no excuse on why Ben suddenly couldn’t find it.

That, on top of not providing the necessary DNA sample, made Cornell go after him like never before. She constantly stopped by his house all the while knowing the cameras were recording her frequent visits and even talked his wife into allowing the police to search the family home. So the media frenzy was uncontrollable.

Ben and his family were followed wherever they went and people that he has known for years suddenly didn’t want to have anything to do with him. And that includes Tom’s mother who was a very close family friend. In fact when Ben did try to reach out to Jess Mullen – Detective Cornell warned him away.

So Ben then did what he felt he had to. He gave up his DNA hoping that would get the detective to leave him alone but even if it were to clear him – whoever had written child-killer on his property probably weren’t that big on facts to begin with. Nor for that matter were Ben’s employers because his jobs all dried up when the media got involved.

But the DNA test did no absolve Tom. Because all it did prove was that Ben was actually Tom’s father.

Neither Ben nor Jess knew about that until Cornell told them. And yet when the two later talked, Jess assured Ben that she didn’t believe it was him that hurt Tom. If anything she thinks it’s her ex-husband the war hero. Scott (and really everyone else) thought he was Tom’s father, but that little fact that never stopped him from abusing both his wife and child.

Apparently, he was different when he came home after deployment. And Jess was so scared of him that even took out a restraining order to keep him away. So at the moment he should have been a viable suspect. At least until he was ruled because of an actual cause.

Yet Cornell on the other hand doesn’t seem to what to view Scott that way. Sadly, even though she has proof of an AWOL solider with PTSD and anger issues thrown into the mix, she’s focused this entire investigation on Ben being her killer. And according to her she doesn’t want to waste time following false leads.

Scott, however, is not exactly a false lead. He was seen driving by his estranged wife’s house in the late hours and despite the restraining order he had convinced Ben’s daughter Natalie, who used to baby-sit Tom, to let him see his son whenever he likes. So Scott has continued to be around. And now Scott knows about Tom not being son.

So what did he do with that information? He went over to Jess’s and was in the middle of raging at her when Ben tried to bust it up.

Ben had heard all the noise and was trying to intervene when Scott managed to get the better of him. He put Ben in a choke hold and had roughed him up as well. Though, luckily, that’s as far as things went before Jess’s sister threaten to call the police.

But even with a bruised face, Ben still couldn’t persuade Cornell into looking into Scott. Instead she warned him not to press charges. From what she heard via Jess’s sister, Ben was the one to throw the first punch so Cornell told him it would best interest let things go.

Then she implied he wouldn’t want to have to explain to his wife why Scott was pressing charges against him. Yet, Ben isn’t really scared about his wife knowing he slept with Jess. It seems his wife knew about the one night for some time now and that was one of the many things they were trying to work through during this difficult time in their marriage. So the only part she was unaware of is that her husband was Tom’s father.

She found out about that when there was a supposed leak from inside of the investigation.

To be fair, Cornell did try to warn Ben that the news was coming out but he was ignoring her calls. So by time he did hear from her – it was already too late for him and his family. His wife and teenage daughter learned out about Tom after they had watched the news.

So Ben’s family was imploding and what makes his nearly his marriage unsalvageable is that the same weekend Tom had been conceived – his wife had just had an abortion behind his back. At the time Christy said they couldn’t have another child so that’s why she did what she did. But her husband had disagreed with her and he wouldn’t have talked her out of the procedure if he had known.

Thus, Christy now feels like her husband went out to have the son he always wanted even if it was with someone else.

Though, Ben and his friend Mike were talking and what they couldn’t figure out was who told Scott about Tom in the first place. The police swear they can’t find him and that’s why they can’t question him. And Jess would never tell her ex that. So who told Scott?

Scott seems to think Ben killed his son so as long as he continues in that belief – Ben and his family aren’t safe!