Selena Gomez and Zedd Dating: Confirm They are Boyfriend and Girlfriend – Justin Bieber Going To War! 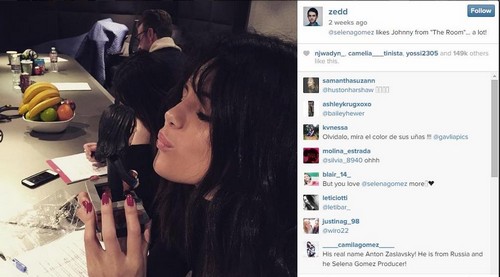 Selena Gomez is dating Zedd and Justin Bieber is going to war after seeing his former girlfriend confirm that she has a new boyfriend through photos and social media. Selena Gomez made a big statement after posting a pic of DJ/Producer Zedd with his arms wrapped around her on Instagram, confirming to fans and friends that Zedd and Selena are, in fact, a couple! Selena looks happier than she has in years, and she and her family and friends credit that to Zedd, her new boyfriend.

Not only does Selena’s family love the super-talented sweetheart Zedd, né Anton Zaslavski, but Selena has fallen hard for her new grown-up boyfriend. Zedd is a complete change from what Selena has put up with for years during her on-and-off relationship with Justin Bieber. Not only does Zedd make Selena feel assured about his feelings and their relationship, he has more mature friends that actually like him, as opposed to the leaches who use Justin Bieber. Zedd is also far more confident and secure in who he is than Justin Bieber. While many believe Justin Bieber to be arrogant with a huge ego, he is actually very insecure and needs constant reassurance and needs to feel fawned over all the time. Justin had Selena living her life on eggshells never knowing when he’d cheat, or just up and leave. It left Selena so emotionally abused that she believed every time Justin left her or cheated on her was a result of her not being good enough to keep him happy.

While Selena was hesitant at first, and didn’t want to move fast, she made her mind up the morning after sneaking off to a late-night dinner with Justin Bieber. Selena didn’t have intentions of cheating, and didn’t feel as though she’d be weak enough to go back to him, but she did want to see what it felt like for Justin to beg for her to come back. Selena Gomez had a wake-up call after their late-night date didn’t go as planned. Justin was talking about all the changes he’s making in his life, and basically just needed to hear Selena praise him and tell him how wonderful he is since he’s not getting that from sometime love model Hailey Baldwin. Selena knew the moment she left the dinner that she’d made a huge mistake. Justin was still lying about his relationship with Hailey Baldwin and Selena knew, despite what he says, he won’t change. Zedd was crushed after learning about the meet up, but Selena explained that she is over Justin and followed that up by posting pics to Instagram that showed Selena in bed Skyping with Zedd. The way Zedd handled the mistake let Selena know that he is mature and he truly loves her. From that moment on, she’s all about Zeddlena and her family and friends could not be happier.

While Zedd admits to imbibing reasonably, knowing appropriate limits, he is not into drugs like Justin was. Selena was so self-conscious with Justin that she was constantly depressing her anxiety with drugs and alcohol, both in excess, just to be able to be around him and his friends throughout most of the relationship. Selena never felt like she and Justin were a normal couple. She was always on edge and always made to feel beneath him. The relationship with Zedd is completely different. She feels ike they are a mature couple in a mature relationship, and she feels very secure. She loves his nice, normal friends and they all feel the same. Selena’s family is ecstatic over the new relationship. They feel she and Zedd are a perfect match, hoping one day she will be Mrs. Anton Zaslavski. Family and friends know that he is far more stable, normal, and mature than Justin Bieber and that he will only help build Selena’s confidence back to where it used to be. Selena has finally broken from Justin’s grip and looks happier than ever. Be prepared for Justin Bieber to go to war trying to win Selena Gomez back now that he has lost her to another man!