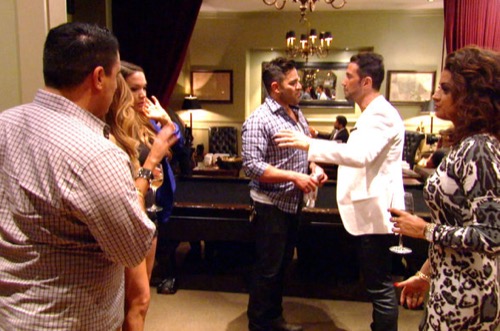 Tonight on Bravo, Shahs of Sunset continues with an all new Monday March 2, season 4 premiere called “I am Gay Ghandi,” and we have your weekly recap below. On tonight’s episode, the Shahs ring in the Persian New Year but the mood dampens when Mike Shouhed picks a fight with Asifa Mirza’s boyfriend, Bobby.

In Shahs of Sunset, the world of a Persian-American clique unfolds as they struggle to juggle their social lives, rising careers, families and traditions.

On tonight’s episode as per the Bravo synopsis, “the Shahs ring in the Persian New Year but the mood dampens when Mike picks a fight with Asifa’s boyfriend, Bobby. Although Reza steps in as the peacemaker, he begins to realize that Mike’s problems may be bigger than anyone imagined.”

Tonight is going to be another great episode of Shahs of Sunset for sure and you’re not going to want to miss a minute. Tune in at 8 pm EST on Bravo and we’ll be recapping it live right here for you but in the meantime, hit up the comments and let us know your thoughts on the new season!

Tonight’s episode of Shahs of Sunset kicks off with Asa and Reza out shopping together – they head to a jewelry boutique. It’s Nowruz, which is the Persian version of New Years and it is Persian tradition to acquire gold during Nowruz for good luck. Asa tries on some Persian headbands and Reza has a tray of Rolex watches brought out. Reza wants the Black Roman Rolex and learns that it is $37,000. Asa manages to talk the price down a few thousand dollars and Reza decides to purchas it. He is marrying Adam soon and Adam told him that once they are married he has to consult with him on making purchases over $5,000 – so he thinks that he should splurge now before he has to explain himself.

Mike visits his parents house and he is a nervous wreck. He reveals to them that he had his girlfriend Jessica’s engagement ring made – he takes it out of the box to show it to them. They sit down for champagne and discuss how he plans to propose. Mike has no idea how he will pop the question yet, but he plans to do it this month for sure. His parents share with him the story of when his father proposed to his mother on the roof of a restaurant.

MJ and Reza pay GG a visit at her new condo, she is still unpacking and her house is a mess. Reza rants that she is a hoarder and she has some of the ugliest furniture – he announces he is going to be her interior designer and make her condo beautiful for free, obviously she is going to have to pay for the new furniture though. GG whines that she wants to help pick stuff out for her house – but Reza says that isn’t allowed because she has horrible taste.

MJ has a new boyfriend named Charlie and she is in love with him – despite the fact that he is Jewish and ten years younger than him. They sit down for a picnic together at the park and talk about Charlie’s upcoming trip to Las Vegas. MJ jokes that she is going to google the worst things a boyfriend can do in Vegas and send the list to him.

At home Reza pours his fiancé Adam a glass of wine – they just moved in to their new house together and Reza decorated it all himself. They’re getting ready for the Nowruz celebration – and they are waiting for their guests to arrive so that they can celebrate the Persian New Year. Asa is the first to arrive, followed by GG. Reza invites GG to have a seat, but she explains that she can’t because she just had surgery and got a butt job. Mike and his girlfriend Jessica show up, along with a few more of Reza’s cousins and friends. MJ shows up for the party and fills her friends in on her new boyfriend Charlie. Reza gives a speech and says that this year is going to be their best year yet because they have all grown and evolved so much.

Nowruz is a two week long event for Persians, now it is time for the next celebration. Everyone heads to Asa’s house for symbolic ritual – out on the patio she sets up a small fire so that they can all jump over the fire. Persians believe that by jumping over fire it cleanses them of all their bad mojo and prepares them for their new year. They chant in Persian while they jump over, but their new friend Asifa is not a fan of the ritual. She whines that she doesn’t “want a hot vagina,” because she is wearing a skirt and high heels.

Later they all sit down for drinks, Asifa chats with Reza and GG and reveals that she is dating her ex-husband. Asa serves snacks, and Jessica fits a whole one in her mouth. Everyone makes comments about how wide she opened her mouth and Reza starts ranting about how much “mike loves blow jobs.” Jessica is offended by their conversation, and says that MJ is obsessed with her boyfriend’s “dole.” She snaps at MJ that she has been “the only one sucking Mike’s d—k for the past three years.” Asifa chimes in and asks how small Mike’s penis is, and if it is Micro and Mike freaks out on her and says that he “doesn’t take jokes very well.” What everyone doesn’t realize is that Asifa used to be friends with Mike’s old girlfriend and there is a lot of animosity between Mike and Asifa.

MJ tries to change the subject and talks about how much her friend Shervin and Mike look alike. Reza begins to discuss his upcoming Bachelor party, and Mike begins pounding drinks and getting wasted. A party bus arrives to take them out and they all file inside. Asa rented them the hugest party bus that she could find because her friends love to party and are obsessed with buses. They begin pouring champagne and taking turns on the stripper pole – Mike continues to get even drunker.

The party bus pulls up to a restaurant and they eat and drinks some more. Asifa’s boyfriend Bobby arrives – and the party gets awkward because Mike and Bobby hate each other. Mike and Reza stand in the corner and make fun of Bobby’s suit – Asifa gets upset and says that if anyone makes fun of her boyfriend she “will wreck them.” Reza tries to make peace but Asifa and Mike begin arguing about who started it and he is still upset that Asifa said he had a “small d—k.” Mike and Bobby nearly come to blows and Bobby takes off the jacket that Mike was making fun of – Mike steals his jacket and says he is “keeping it as a souvenier” and tries to leave the restaurant.

Mike and Jessica storm out of the restaurant and Jessica shouts that she “doesn’t give a f—k about those people.” Inside Reza tries to calm everyone down and play “Gay Gandhi.” Outside Jessica is throwing a fit, she screams at the camera guys following her to get the microphone off from her. MJ tries to comfort her and Jessica rants that she is sick of Mike acting like a child.