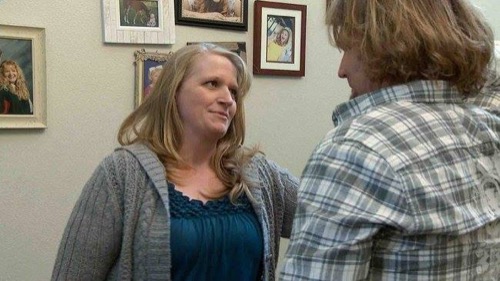 TLC’s reality show Sister Wives returns tonight with an all new Sunday January 25, season 5 episode 13 called “One More woman in Kody’s Life” and we have your weekly recap below. On tonight’s episode Christine’s two oldest daughters, Aspyn and Mykelti, are moving out, while her mother Annie is moving in!

On the last episode, the blow up between Kody and Christine continued as they approached their final destination. Could Kody get to the root of the problem? Later, the Browns met another polygamist family, the Colliers and discussed the idea of the Colliers courting another wife. Did you watch the last episode? If you missed it we have a full and detailed recap right here for you.

On tonight’s episode as per TLC’s synopsis, “Christine’s two oldest daughters, Aspyn and Mykelti, are moving out, while her mother Annie is moving in! How will Kody handle having his mother-in-law around all the time? Later, Meri comforts Robyn about her ongoing struggles with her ex-husband.”

It’s time to say goodbye to Aspyn and Mykelti on tonight’s all new episode of “Sister Wives”. The girls are moving out and for once they’re going to be living (albeit relatively) on their own. And as Kody goes through the emotions of saying farewell to his daughters – he also has to begin preparing himself for when mother-in-law eventually moves in.

Aspyn and Mykelti were Christine’s eldest so she was crying as she left their new apartment. Though, they were really more just her children. They were also her babysitters and in Aspyn’s case – they had an overall calming effect on the family. So naturally there’s going to be a hole to fill.

But it’s also Christine’s mother, Annie, that’s moving in. And that’s means she is going to still get help even though it starting to look like it’s coming at a cost.

Annie, while seemingly a nice and pleasant person, does have some baggage of her own. For it seems that a few years ago she had been talking against plural marriage. And now with the move – the sort of thing she doesn’t approve of is what’s now going to be constantly thrown in her face.

So there is some apprehension in the family about that but then again there’s also another form of tension that’s been hurting the Browns without anyone really noticing until recently. And that’s with the way they’ve been raising the kids. Way back when, the sister wives (Meri, Christine, and Janelle) all used to help each other raise the kids. It was just big family environment.

And then things changed when they moved to Las Vegas. Suddenly Robyn was hiring an outside babysitter and Meri wasn’t becoming as close to the younger kids as she was to the older ones.

In other words, the whole family dynamic had changed and apparently that ended up hurting some of them more than they let on. Christine was upset when Roby hired someone. Meanwhile Meri felt cut adrift without her own child and yet didn’t exactly feel needed by anyone else either.

So for someone, Annie that is, to come into the picture with these other things coming up – that could either hurt them or at the very most make the adults figure their stuff out.

Annie was once in a plural marriage herself. Then she divorced her husband and was later a member in an anti-polygamist group. The same group many blame for painting everyone as child abusers. So Annie, overall, is notorious in the polygamy community.

After she had taken part in that, Christine had cut her mother off. She refused to take the other woman calls and she hadn’t seen her in a months. And how they were able to get over all of that is because Kody’s mother had ultimately helped them.

And it seems all they needed was a peacemaking third party to come in. For while Annie doesn’t necessarily like certain things about polygamous marriage – she does love her daughter enough to support her. Not enough to be there at Christine’s wedding reception but supportive of her daughter nonetheless.

Plus, Annie had left that anti-group in the end when she found them to be too radical. So as long as she remembers the rule of the third wall in regards to Christine and Kody’s relationship – truthfully there shouldn’t be any problem there.

In fact the only thing Kody actually has to worry about is whether or not other mother-in-laws will be moving in. Robyn had told her mom about Annie and then she wanted to know why Robyn hadn’t asked her to move in as well.

So it looks like Annie is giving people ideas!