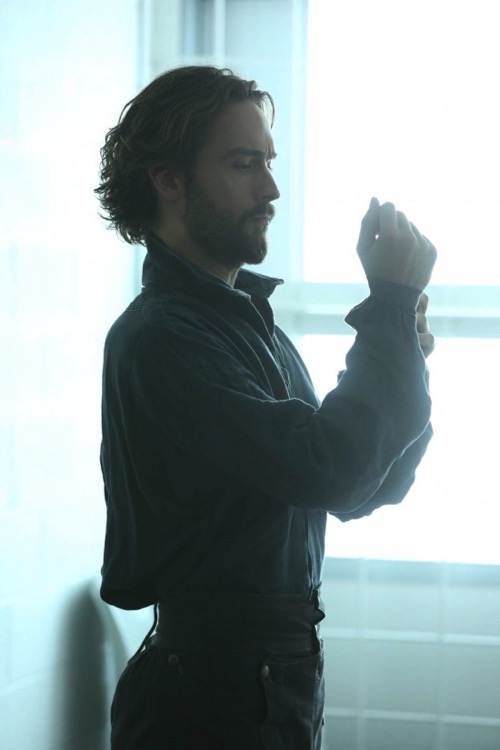 Tonight on FOX their mystery adventure drama SLEEPY HOLLOW continues with an all new Thursday October 1, season 3 premiere called “I, Witness.” On tonight’s episode, in the Season 3 premiere, a mysterious tablet’s discovery means Abbie (Nicole Beharie) and Crane’s (Tom Mison) fight against the forces of evil may not be over.

For those of you who don’t know, the show is an update of Washington Irving’s classic tale about Ichabod Crane, who wakes up in the 21st century but finds his 18th-century nemesis, the Headless Horseman, has also come along for the ride.

On tonight’s episode per the FOX synopsis “in the Season 3 premiere, a mysterious tablet’s discovery means Abbie and Crane’s fight against the forces of evil may not be over, and there could be new enemies in their midst.”

Tonight’s Sleepy Hollow Season 3 Premiere is going to be exciting, and you won’t want to miss. So be sure to tune in for our live coverage of Sleepy Hollow — tonight at 9PM EST!

Agent Mills of the FBI got a call from an old friend on tonight’s episode of “Sleepy Hollow”.

It seems nine whole months have passed since Crane claimed he needed to go for a walk and just did not come back. So Abbie had to move on with her life and to, be fair, a life without an impending apocalypse has been working out for her. She joined the bureau and in these last few months she’s become something of a star agent.

However when she got the call from Crane asking if she could pick him from an immigration detention center, she decided to drop everything. Almost as if she had merely been waiting for his call. So she clearly she must have missed him. Though from their early conversation it doesn’t look like she’s missed their old demon hunting.

Crane had apparently gotten himself into trouble because he was unintentionally smuggling in a Babylonian artifact into the country. But the agents that arrested him didn’t care about its supernatural powers. And neither for that matter did Abbie.

She ended up laughing later when Crane told her that he had dug up the artifact because it held a prophecy called “the Legend of Sleepy Hollow”. Yet Crane felt the tablet could be informational. He said that he felt the moment evil had returned to Sleepy Hollow and he was using both the ancient tablet and Katrina’s necklace as proof of it.

He said something strange had happened to Katrina’s necklace which he chose to wear as a sentimental keepsake of his wife. One day everything was fine but then, out of nowhere, another force drained the necklace of its power. So Crane felt like that vindicated the legend.

But Abbie asked him if maybe he wanted something to be true so that’s what he went out and found. So it wasn’t until she got a call about a crime scene that she started to listen to Crane.

When they got to the scene where two men died, there noticed a few things odd about the place and Abbie eventually allowed Crane to test the area for a demonic presence. She didn’t think anything was going to happen but, even after Crane was proved to be right, she tried to dismiss it. She said that there could be a demon around that just hadn’t gotten the memo about the war being over. Though she didn’t fight him when he wanted to look into the deaths of the two men.

With Jenny’s help and using their former extensive library, Crane came across the description for “The Red Devil”. It was a demon that could frighten men into a paralysis before killing them and the last mention of it in history was at the Battle of Bunker Hill. So Crane needed more information about this creature and his friends helped him figure out that he needed to find a message Betsy Ross once delivered.

The message was delivered to a well-known name at the time and over the years his heirs have passed it down until one day they sold it to the Colonial Times restaurant. Two guesses on what theme it was. But ultimately Crane found the place to be insulting to actual American heroes. Who he felt was being used for profit.

But just as they were getting somewhere with their investigation, Abbie had to abandon Crane. Her unit was about to take down a huge drug ring and it would looked good for her career if everything was successful.

Plus on a personal note, Abbie felt like everything had ended with the death of Moloch and she didn’t want to believe Crane when he said that the witness had to go through seven tests. So Abbie walked away and she left her sister and friend to figuring out the demon. The same demon by the way that they later learned had two triggers – aggression and gun powder. Two things that were bound to happen as a drug bust.

Thus Crane and Jenny knew they had to race to Abbie’s rescue but by time they arrived it too late for Abbie’s boss. Her supervising officer had gotten attacked by the demon and all Abbie could do was injury it.

Neither Crane nor Jenny had even known they could injure the Yao-guai. So Abbie was actually one step ahead of them. She told them that she had shot the demon when its eyes had gone white. And that made a message from the Bunker Hill days make sense.

The general had told his soldiers to wait to shoot until they saw the whites of the demons’ eyes. Meaning the Yao-guai was at its most vulnerable when it was in the middle of an attack. And all they had to do to kill it was wait until it was riled.

So Abbie went in a hostage situation with the only other man that saw her boss die – the drug-runner they wanted to bring in – and she assured the man that everything was going to be fine. It seems she finally realized that as a witness it was her job to destroy demons. And she promised to take down the demon he saw.

And after she talked the man from doing something he’d regret, she set out to find Jenny and Crane. Which ended up being a great thing because the demon almost had them.

So Abbie saved the day and she killed the demon before he could hurt anyone else. But it wasn’t long before she had another run-in. That time with a woman that she accidentally bumped into a bar though, unbeknownst to Abbie, had also been the one to call forth the demon.

The woman said her name was Pandora and she definitely gave Abbie the impression that she couldn’t wait to make friends while she was in town.