So You Think You Can Dance Top 20 Recap and Spoilers: Season 12 Episode 7

BY Kristine Francis on July 14, 2015 | Comments: one comment
Related : Reality TV, Recap, So You Think You Can Dance, Television, TV 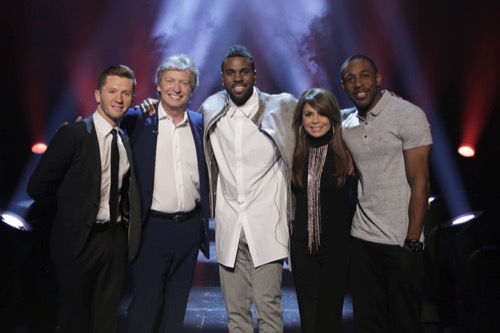 Tonight on FOX, SO YOU THINK YOU CAN DANCE continues with an all new Monday, July 12 season 12 episode 7 called “Top 20 Perform”. We’ve got your recap and spoilers down below. On tonight’s episode the Top 20 dancers perform.

On the last episode, callbacks continued in Las Vegas! Watch as the judges handpick the 10 Stage dancers and the 10 Street dancers who had what it takes to make it through the last round of callbacks. Did you watch the last episode? If you missed it, we have a full and detailed recap right here for you.

On tonight’s show per the FOX synopsis “it’s the first live show of the season! The Top 20 have been chosen and now it’s time for the dancers to show America they have what it takes to win. Tune in to watch the Top 20 give it everything they’ve got, and to see a special guest performer take the stage.”

The top ten of both Team Stage and Team Street have finally been chosen and on tonight’s episode of “SYTYCD” it was up to the twenty to perform.

However before we get into the performances there was some sad news to pass on. It seems one of the dancers from Team Street had injured himself during practice and was unable to continue with the competition. And with Hurrikane benched, the judges called upon Asaf to replace him.

Remember Asaf. He was the young man that kept mouthing off at the judges and so it was a bit of a surprise that he even was anyone’s second string. Yet he’s here and I for one was looking forward to seeing what he would do.

But in the meantime Dave Scott came up with the choreography and a team consisted of three were the first to represent their team.

Neptune, JJ, and Megz were the first group from Team Street and they were supposed to do their take on being a superhero. And while the crowd certainly enjoyed what they created with Dave Scott, the judges were another story. Nigel for once was just happy but Paula and Jason were the ones to find fault.

Paula felt that some of them had lost track of their face or more importantly their facial expressions during their dance. And Jason went even further by implying he was disappointed. He said he had expected more from them and at this point in the competition he should have been wowed.

And, though it’s a harsh thing to say, the bar was set kind of low with the first act!

Thus it was up to Stacey Tookey to have come up with something beautiful enough to make her dancers shine in only the best light.

Stacey choreographed for Team Stage and she created a routine for Moises, Gaby, and Derek. It was supposed to be soft and it was supposed to be emotional. And unlike what happened with the first team, this group actually lived up to all their potential.

And as a result, Paula practically poured praises all over them. Then it was the same with Jason. Who was a bit of a stickler earlier but suddenly couldn’t name one thing they did wrong.

So it was Stacey that was congratulated for what the judges saw. Though to be fair the other choreographers had more of a struggle on their hands. Christopher Scott was called on to get Asaf, B1, Jaja, and Lily together. And at first this quartet had to come together in parts.

The girls had fallen into sync as if they’ve always been a group but the guys were beatboys. And no two beatboys are ever alike. So Stacey had it easy but Christopher had to work for it.

And rather than ignore everyone’s differences, Christopher chose instead to play that part up. He had all four come out onstage and begin with individual routines. Then had had them slowly morph until they were all in sync.

And, frankly, it was an amazing thing to watch.

Jason was up out of his city giving the guys a standing ovation before they technically had finished. And Nigel later said that this group blew his mind away. He had originally thought no one would be able to beat Stacey but after what Christopher did – the judges couldn’t stop thanking the man behind the routine.

So that was hard for those like Brian Friedman to follow. Now Brian is talented. There is no doubt about that. However he came up with a routine that was tad too sexual.

There could be a seduction onstage but when Jason voiced out loud that he felt like he was in Miami then that’s when you know the dance went too far.

Brian had Marissa, Hailee, and Alexia on his team and he gave them a sexy jazz number that went beyond being overt. So the girls were told that they should have internalized some of their actions so that they at least left something up to the imagination.

In other words it’s often the choreographers who receive the praise when the dance goes well but it’s the dancers’ fault when the seemingly did everything they were told to do.

And after the all-girl routine failed to impress the judges, Team Stage then attempted to elicit a more favorable response with a male duo. See Darion and Jim are the ballet guys. But ballet guys never really had a place on the show until now. So their choreographer, a new guy by the name of Swan, chose to work with their strengths.

Ballet guys ended up doing ballet and oddly their twist to it was to play up the “guy” angle. Meaning they made the dance intense and it almost felt like they were two gods going to war onstage. Yet, here’s the thing, the guys still weren’t able to pull of flawlessly.

So the blame does fall back on them.

The guys received criticism for their one maybe two mistakes. But it was well deserved. Because, really, despite everything they added, this should have been the group that had it all under control.

And the same goes for Team Street’s Ariana, Virgil, a Yorelis. Especially as the only thing they did wrong was occasionally lose face.

They were up onstage and they had a routine given to them by Phoenix and Pharside that was both fun and energetic. So truthfully they had everything they needed but messed up by getting too relaxed (i.e. forgetting where they were). For it appears that the judges were still watching all parties even when it was only two of them that were dancing at a certain time so when this third person thought they could just stand there – the judges took note and had to warn them about it.

Yet the dancers kept making this mistake over and over again. Kate and Edson were Team Stage and they had danced a beautiful (If I do say so myself) duo but unfortunately they were told they threw the entire dance off because of their faces. According to the judges, sometimes they looked happy and sometimes they looked sad while they were dancing. So that threw off their chemistry and Nigel for one couldn’t understand the story thanks to all the “mixed” signals.

I didn’t get it and Team captain Travis didn’t get it either. He later found his team members and assured them that he hadn’t seen anything wrong. So who knows! Maybe he judges were simply looking for mistakes

But before this turns into a rant, it should be stated that Team Stage as a whole later took the stage with a Broadway number given to them by Warren Carlisle and no one seemed to find fault with that. In fact the dance was an absolute crowd pleaser. And for an act that was forced to follow Jason Derulo up onstage during the break then I have to say they held their own.

And after Team Stage, Team Street hit the stage with their military number provided by Tabitha and Napoleon D’umo. Though in this case it was a bit of shock that somehow all came together.

Back in practice, people were struggling. And Asaf ended up being one of them. So at one point he had to take his captain aside and simply say he couldn’t do a certain part. And the choreographers then had to find a way to change up their routine in order to give him a chance to do better in a different area.

And that’s how the dance was pulled together.

So I know I’ve seen this weakest link but the real question is will he be voted off?