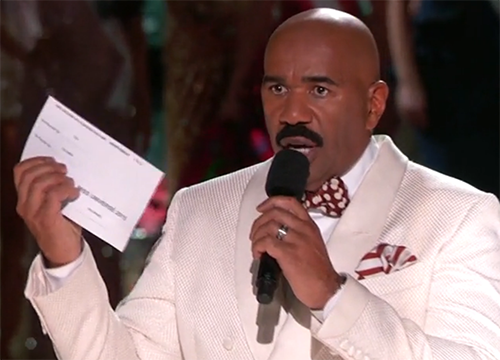 The Miss Universe Horror Show of 2015 has taken a turn for the worse. After Steve Harvey announced the wrong winner during Sunday night’s live telecast, a tsunami of chatter hit the pageant world – Miss Germany pulled an Angela Merkel and Miss Snapchat User showed everyone that Steve Harvey was as innocent as John Travolta on a Lesbos holiday trip.

According to a recent Fox News report, “A seven-second behind-the-scenes video shows Harvey immediately after naming the wrong winner — Miss Colombia instead of Miss Philippines — pointing to a cue card and talking to an unidentified person saying: ‘The teleprompter said Miss Universe – Colombia.’”

Cue cards, teleprompters, and Donald Trump – yes, even Trump himself weighed in on the issue; why wouldn’t he?

As for Miss Colombia, well, imagine how you would feel if you were in her pointy stilettos. She was the shortest reigning Miss Universe in history – shorter than most of TLC’s reality television shows. The scorned beauty queen is keeping mum on the debacle.

She’s probably chewing on a fake tiara, crying diamond tears, and planning the destruction of the Philippines. It’s like Demi Moore all over again, but with more makeup and less Ashton Kutcher.

Who would have thought that a self-indulgent Best In Show could be this interesting? Who should be blamed for this lovely little mishap? Steve Harvey obviously took the fall for a drunk producer’s poor typing skills.

I swear to God, if this is another of ISIS’ tricks, I’m leaving the planet. They say Mars is perfect this time of year.

Come on Celeb Dirty Laundry readers! Give us some of your valuable insight. What the freak happened? Did one of the Family Feud families finally snap? Should Miss Colombia be co-crowned? Should Miss Philippines get a bodyguard? An army? Donald Trump?