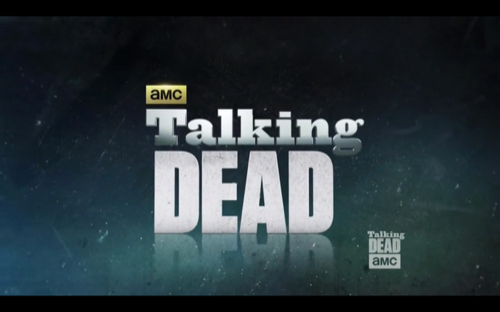 Tonight on AMC Talking Dead returns with an all new Sunday August 23, season 6 preview special and we have your weekly recap below. On tonight’s episode, they’ll be reviewing Season 6 of “The Walking Dead.”

Tonight on Talking Dead as per the AMC synopsis, “joining host Chris Hardwick is Scott Gimple who’s known for writing and producing The Walking Dead and Jorge Garcia who’s well known for starring in LOST as Hurley.”

The #TalkingDead season preview of Walking Dead Season 6 looks amazing. Chris Hardwick reminds us it’s been five months since Rick beat up #porchdick and Morgan showed up. Jorge Garcia from Lost and Hawaii 5-0 and Walking Dead executive producer Ron Gimple are the guests. Chris asks how they will up the game this season. He says this will be the biggest premiere and biggest season yet.

Chris asks if there will be more walkers this season and Gimple says yes. Gimple says there are more walkers in the season premiere than any other episode and Jorge asks if half walkers count if they don’t have legs. Chris says Jorge has been on a show with a lot of character deaths and Jorge says you see it and it’s like – there’s another character that got fired. He says on Lost they came back in flashbacks.

He says if someone comes back on Dead, it’s as a monster. Chris asks Scott if he’s going to kill off all the main cast members this season. They talk about how fans would riot if they killed off Daryl. Chris says he feels like a therapist since he has to talk to them after a character dies. Chris says it stresses him out and he tries to counsel them. Scott says he has no sympathy for him.

Scott says it gets tough as it gets close to a character death. He says everyone is great and they die when they have more story left to tell so it’s upsetting. Chris runs a poll and asks which is scarier – the Wolves, Walkers or the Smoke Monster from Lost. Jorge says walkers are endless. People pick the Wolves – smoke monster only got 7% of the vote.

Chris shows a clip he calls the kill of the season – it’s Noah’s revolving door murder – the brutal bloody one. Next up is an interview with Lennie James aka Morgan who says he loves learning new skills on the show and this season learned the bow staff. He says he’s obsessed with it now and plays with it alone in his apartment at night. He says he pictures taking people out at the store while he shops.

He says Morgan was a murderer and dirty and bloody and now Ric is in that spot. Chris asks if Rick killed Reg before he became a walker or Pete for killing Reg and Scott says he killed Pete. Chris talks about how the biggest dicks on the show are the nicest guys in real life. He talks about how nice Pete was and not a porch dick at all.

Greg Nicotero talks about how there will be little clues throughout the season and that there will be closure at the end of the season. Danai Gurira aka Michonne says the katana being used to kill Reg was really upsetting for her since she put it down to try and be more normal. She says Michonne will go back to it so no one else will try and use its power.

Jorge says Pete would have killed Reg anyway even if he didn’t have the sword. Scott talks about Gabriel and the theme of survivor’s remorse. He says Sasha has that and PTSD and she and Gabriel collide. Scott says if you don’t get your crap together, bad things happen in that world. A fan asks Scott what was the most difficult episode. Scott says it’s a rolling thing.

He says 401 was a tough one and 501. He says the season 4, 5 and 6 season premieres were a challenge. Chris shows a new Walking Dead toy RV and tiny Dale character. He gives it to the fan who asked the question. It also comes with zombies. Then Chris pulls an Oprah and says everyone is getting one. Next up is the live quiz. Answers at the end of this post!

#1 What brand of cigarettes did Daryl find in Atlanta last season? Morley or Tarlboro or Red Apple
#2 Which TV shows has featured the most Walking Dead cast members? CSI, NCIS, Law & Order
#3 What does Tovah Feldshuh (Deanna) do before every take? Sings a show tune, does pushups or eats a banana

Next is Inside the Walking Dead. They show a machete to the head zombie kill last season and it was a shot for shot tribute to George Romero’s 1979 Dawn of the Dead. Tom Savini made the kill in Romero’s movie and he’s Greg Nicotero’s mentor. Last five episodes of season 5 were Remember, Forget, Spend, Try and Conquer. They come from a quote from Dale from season 1. Alexandria is filmed in a location adjacent to Woodbury on the site of an old cotton gin factory.

Next up is costumer Eulyn Womble. She says there are new characters. Carter is a new guy he’s a construction guy so she went with flannel in rich colors. She wants him to look a bit like Rick. Heath is a runner with Glenn’s group and his outfit has more armor. Dr Denise is new too and she’s got an inside job so she’s bland to blend with the walls in the infirmary. She says she wants the costumes to speak for them before they say a word.

Scott says two of the new characters are from the comics and one is an amalgam. Chris asks if they’re closer to the comic books and Scott says some things you can’t do but says some great things are there that are not in the book like Michonne’s katana. Chris says Danai said at Comic Con that her taking back the katana was a responsibility. Jorge says he wants Carol to stay hidden as long as possible and it’s a strength to not show that card and it’s powerful.

The next poll is – would you let Carol baby sit your kids. Yes or no? Scott says he would and Chris says Carol is such a powerful character and could lead. 76% of poll takers say yes. Scott says what’s the worst thing that could happen – a scary bedtime story? A caller asks what can Scott tell them about the W’s on the walker’s heads. Scott says the Wolves did that and they have W’s on their skin too – they’re into scarification. He says they have a code and a process that he won’t share now.

He says they are devious. Chris jokes that it’s not George W Bush. Jorge says they’re werewolves. Chris talks about a huge premiere party in Madison Square Garden. Michael Cudlitz aka Abraham Ford, says he loves the fans and meeting them at cons. He says they always want him to say dolphin dick and mother smooth and who’s Deanna. He says Abraham speaks from the heart which is the best and worst thing about him.

Chris says One Direction is taking a hiatus and that may start the apocalypse. He reads off fan questions. Who would be a batter Batman, Norman Reedus or Andrew Lincoln. Scott says Norman was the animated Punisher and John Berenthal (Shane) was the live action Punisher. Scott says Daryl the character would be a great Batman but would go with Rick. Jorge says Rick has the Batman type of mental anguish. Scott says Reddit people pointed out that Rick would make a great joker.

Chris says the Brits keep taking American super hero roles. Another fan asks how many communities the Wolves have taken down. Scott won’t answer and says they saw the one already. He says they told Morgan this is what they do. Jorge says the show is a great commercial for gated communities. Jorge is in a new movie called Cooties with Elijah Wood. Jorge says a kid eats a bad chicken nugget and she turns into a kid zombie and they have cooties and attack the faculty.

Jorge says it’s funny and really scary. Jack McBrayer is also in it. Another fan question is if John Locke would be more of a Rick or a governor. Jorge says John wouldn’t keep heads in an aquarium. Chris says it hasn’t been decided if there will be a Talking Dead for FTWD and says it’s up to fans. Denise Huth talks about all the action in the last few moments of Season 5 – Reg and Pete dead and Morgan there then the Wolves are not far away.

Denise says Alexandria is a society and the group are more rabid. She says will Alexandria absorb them or will they eat them all? Now a sneak peek of the season 6 premiere. We see Abraham and Sasha out driving and he asks if she’s good and she says she’s trying. She asks why he even got in the car with her if he’s so worried. She says this is big what they’re doing and it’s living. She says – there it is. Chris asks how will they ever get out of that car and mocks him it for not having any action.

Scott says they were trying to pick a scene that gave nothing away. He says the episode is a puzzle and they didn’t want to give anything away. Then he jokes that it’s just 90 minutes of them in the car. Chris says that’s a joke and Jorge says it all takes place in a walk in fridge. Scott says it fires you out of a cannon. He says 401 laid out the season, 501 was wall to wall crazy and 601 will be a mash up of these concepts. Chris says he’s just happy to be back in his Talking Dead chair.

Then he shows a clip of tonight’s Fear the Walking Dead. Chris says the new show is fun since the fans know more than the characters. Jorge says it was crazy and the fresh zombies are nice with good skin. Chris says you would just think they were on bath salts. Chris says he’ll be back for the season finale of #FTWD.

Quiz Answers
Answer #1 Morley – This fake brand has been used in other movies and TV shows including The X-Files.
Answer #2 Law & Order – 17 actors from Dead have been on Law & Order, 14 appeared on CSI franchise and 8 appeared on both L&O and CSI.
Answer #3 Does pushups – she likes to get her blood pumping before scenes and also swims ½ mile every day