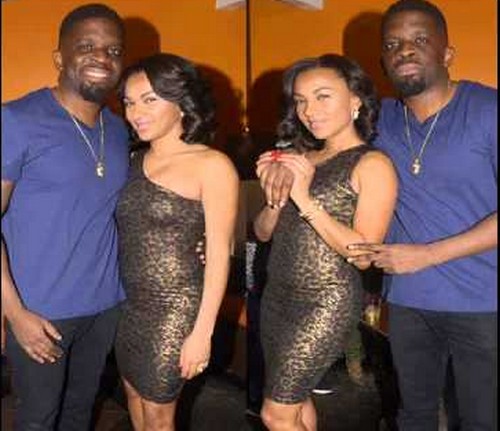 Tara Wallace of “Love & Hip Hop: New York” fame is pregnant and Peter Gunz is the father again despite the fact that he’s still trying to fix things with wife Amina Buddafly. It looks like the “LHHNY” love triangle is about to get even more tangled up just in time for the premiere of season 6 in about a week.

Tara’s pregnancy was first reported by Fameolous and then confirmed by Mediatakeout, who posted pictures of the reality star looking to be around five or six months pregnant. That fits perfectly with the cheating scandal involving Wallace and the still-married rapper from back in May.

There was a lot of drama surrounding the live VH1 marriage of Yandy Smith and Mendeecees Harris on May 25. Yandy and her man were racing the clock to get hitched before Mendeecees was sentenced for a drug trafficking conviction that would send him to prison for years but that isn’t even the hottest drama from the highly televised event.

Amina Buddafly was not present for the “Love & Hip Hop” wedding and everyone wanted to know why. Amina was quick to clear up any confusion when she told fans that she wasn’t even invited to the televised event. Instead, Amina’s husband Peter Gunz showed up to the ceremony and spent much of his time with ex-girlfriend Tara Wallace on his arm.

Despite being dumped by Peter for Amina after dating for 13 years and having two sons, Tara Wallace is still trying to stay in a relationship with the most unfaithful man on “Love & Hip Hop: New York.” It looks like Tara got payback for Amina stealing her man now that she’s stolen him back or at least borrowed Gunz in order to refresh her “LHHNY” storyline and stay on TV.

At least that’s what Tara is being accused of doing. Rumor has it that Wallace was going to get the axe from “LHHNY” after season 5 because her storyline had played out and there was nothing new to film as far as she was concerned. Now Tara is looking like one of the most interesting storylines since she’s been knocking boots with Peter while his estranged wife Amina Buddafly admits she can’t seem to leave her bad boy baby daddy alone either.

Tara’s secret baby news was leaked just days after Amina Buddafly posted a picture of herself hugged up with Peter Gunz on Instagram with the caption, “When u love your man no matter what and people hate u cause of it and say ugly things about u but you don’t care cause u know he loves u.. You might be special like me.”

The German-born singer has been criticized for refusing to walk away from Gunz but it looks like she’s in deep and doesn’t even care that he’s making more kids with his on-again, off-again ex-girlfriend.

VH1 is already airing teasers for the upcoming season of “LHHNY” showing a huge blowout between Tara and Amina who are still fighting over Peter. The whole drama between Tara Wallace, Peter Gunz and Amina Buddafly is sure to unfold when season 6 of “Love & Hip Hop: New York” returns to VH1 on Monday, December 14.