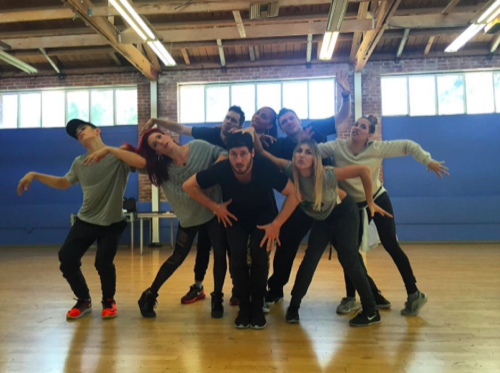 Tonight on Dancing With The Stars it is the highly anticipated Team Dance.  Team Nightmare danced a freestyle dance on tonight’s season 21 week 7 of DWTS for the Halloween Night themed music evening.  Team Nightmare is comprised of Nick Carter (Team Captain) & Sharna Burgess, Tamar Braxton & Val Chmerkovskiy, Andy Grammer & Allison Holker and Hayes Grier & Emma Slater. They danced their freestyle dance for their team dance.  Did you miss any of the dances tonight?  If you did you can see them all, RIGHT HERE!

The eight remaining couples will perform an individual Halloween-themed routine in addition to a competitive team dance. For the team dances, the cast has been divided into two frightening teams: Team #Nightmare and Team #WhoYouGonnaCall. These two teams will compete against each other, vying for a perfectly wicked score from the judges.

Team Nightmare Judges Comments: Julianne: “The concept was so fun, the concept, the hair and makeup. Hayes stood out in this routine. It was honestly one of the best team dances ever.” Bruno: “That was a monster smash, I felt like I was watching a Broadway show. It was flawless and the story line was crisp and clear, you were all on fire.” Carrie Ann: “First I have to say thank you Nick. If I was the other team I would be pooping in my pants right now, that was great.”