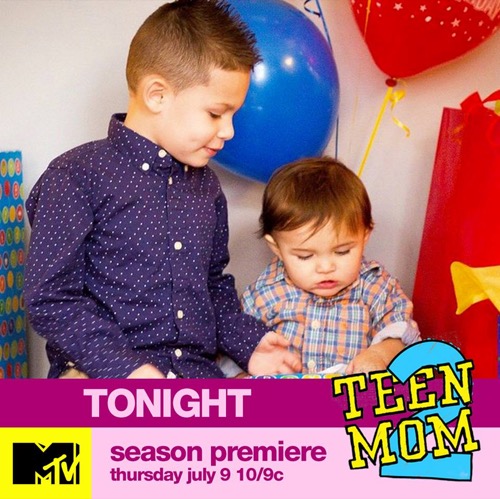 Tonight on MTV their series Teen Mom 2 continues with an all new Thursday July 9, season 6 premiere episode called “Keep It Moving” and we have your weekly recap below. On tonight’s episode, in the Season 6 premiere, Javi is upset by something he finds on Kailyn’s phone; Adam wants shared custody of Aubree, which shocks Chelsea.

For those of you who don’t know, young moms are followed in this spin-off of “16 and Pregnant.”

On tonight’s episode as per the MTV synopsis, “in the Season 6 premiere, Javi is upset by something he finds on Kailyn’s phone; Adam wants shared custody of Aubree, which shocks Chelsea; and Leah faces Corey in court for custody of their daughters.”

It sounds like Teen Mom 2 is going to be an awesome new show. Don’t forget to check CDL for our live recap of Teen Mom 2 premiere at 8PM ET!

The ladies are back on tonight’s season six premiere of “Teen Mom 2” but some of their underlying problems actually feel very familiar.

For instance, it’s still kind of a battleground at Kailyn’s house. She and her husband have been working towards fixing their marriage for almost a year now but not much has changed. And all of that counseling doesn’t seem to have helped.

Kailyn continues to feel like her husband is just waiting to hang things over her. So that’s made her feel like she always has to step careful and, honestly, no woman feels that way in her own home.

Then there’s Jenelle. Jenelle’s mother originally agreed to start transitioning Jace in order for him to one day live with his mom and yet she’s not said anything about it since. Jenelle is starting to feel antsy. And there’s also a part that wonders if her mother is simply stringing her along.

So it doesn’t help that Jenelle’s boyfriend Nathan is voicing some of her worst fears. He says Barbara is never going to give up Jace of her own accord and he’s been encouraging Jenelle to take her mother to court.

And as for Leah, her marriage is just as rocky. It seems she wanted to talk to her husband about possibly putting his family first. Or at the very most making them feel like they were being put first. But Jeremy just couldn’t do it.

He’s working to support a wife and three kids and every time Leah find fault in him for doing so – it makes him shut down. Like only a guy can do.

It’s not like he went out of his way to avoid his wife. Though working out of town is what’s currently paying the bills. So Jeremy didn’t want to hear his wife complain about his job and thankfully he was willing to walk away from their dinner date to avoid an argument that definitely could have turned nasty.

And what do you know, even Chelsea is looking at a potential custody battle with her ex.

Adam sent her an email stating that he wanted to go in 50/50 with her and she finds that to be laughable. So far Adam, at least in her opinion, he’s struggled keeping up with his bare minimum of visitation rights. And often their daughter comes across as his last priority. So for him to ask for even more responsibilities is something that simply doesn’t make sense.

Especially as Adam is going through the exact same thing with his other ex-Taylor. And later, after Chelsea had told her dad about the email, he advised her to team up with Taylor so that they had a better chance at fighting Adam in court.

Thus, at one point, there didn’t seem to be a shred of good news to be found this season. Not with the majority of them going through a custody battle anyways and Kailyn’s marriage being on the verge of collapse.

But then the sun came out and Leah won her custody disagreement with her ex-husband. He had tried to make it look like she was an unfit mother yet he failed to prove his lies. And once Leah proves that she hasn’t been taking drugs then she’ll be in the clear.

So, really, Corey gambled and lost. He used to have a great co-parenting thing going on with Leah though now that he’s done this how she can trust him?

And Adam actually looks like he worked on himself. Sure he’s had his issues in the past but, to be fair, he also clearly states that he’s been clean for fifteen months and that he’s not seeking joint custody merely because Chelsea in a relationship. If anything Adam looks like he wants to make an effort and he feels like if he doesn’t step in then Aubree may never see her sister again.

So if that’s his story (and if it pans out) then maybe he should get to see the girls a little bit more. Even if 50/50 in both cases is out of the question.

However Kailyn is going to have to call it quits sooner or later. Earlier, she had literally asked her husband if she could go to a concert with her friends and he said that it wouldn’t be a problem. But on the day she was supposed to leave he accused her of cheating on him with one of her guy friends.

And then he refused to pick up her son from school. He said it was her responsibility but to make it to the concert and be there for her eldest meant she would have to pull the little boy early from class. So Javi wasn’t going to let her go to the concert and he knew which buttons to press.

By time she had agreed to staying home, she had promised to change her number just to please him.