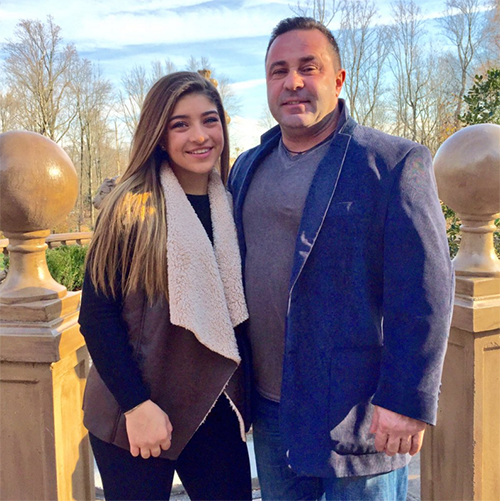 Will Teresa Giudice prison release involve a lot of drama? Has Teresa already demanded that Joe Giudice move out? Is Mrs. Giudice disgusted by Joe’s rumored cheating? Tre will be back at the Giudice mansion on December 23, just in time for Christmas. You think it would be a thrilling time for Joe and Teresa, as well as the couple’s four daughters. But insiders say the reality of the situation is this: there may be nothing merry about the Giudice Christmas celebration.

A source revealed to Life & Style that “everything’s going to be crazy. It’s going to be a shock for everyone.” The first thing Teresa might address is Joe’s cheating. Tre was allegedly heartbroken when she found out about Juicy Joe’s repeated infidelity – both before and after the mother of four went to prison for fraud.

Joe is reportedly bracing himself for a huge blowout fight with Teresa over the scandal brought to the family by Juicy’s alleged affairs. The gossip is that Teresa is going to “rip into Joe” and possibly kick hubby out of the couple’s Towaco, New Jersey home.

After all the rumors regarding Joe’s cheating you’d think Joe would want to ensure Teresa’s homecoming after 11 months away in prison is super extra-special. But that isn’t the case. Those in the know say that Joe is drinking and partying a lot “and acting like a total animal.” Joe Giudice has done nothing to ensure that Teresa Giudice’s homecoming will be extraordinary.

If Teresa doesn’t kick Joe out of the house – or hasn’t told Juicy to get out before she is released – it’s possible “The Real Housewives of New Jersey” star will no longer share a bedroom with Giudice. Will Tre move into one of the girls’ bedrooms? Teresa has missed the girls and can’t wait to snuggle and hug them. What better way to reconnect than sharing a bedroom with the girls?

Oldest daughter Gia Giudice may not be so receptive to mom’s love and attention. Gia has basically been running the house while Teresa has been in prison. “Gia has turned into an adult at 14. I’m not so sure she’ll be taking Teresa’s direction,” a source close to the Giudices’ revealed.

With Teresa on house arrest until February, Joe Giudice probably won’t be able to escape Teresa Giudice’s eagle eye. No all-night parties, no sneaking off for intimate dinners with babysitters, trainers or secretaries.

Juicy Joe will be packing up and leaving for a three-year prison sentence not long after Tre arrives home. We’re just guessing, but Teresa will want Joe around in order to make the most of the time the Giudices’ have together before Joe has to surrender. Either that or the couple will spend the next few months screaming and fighting – and living in separate bedrooms.