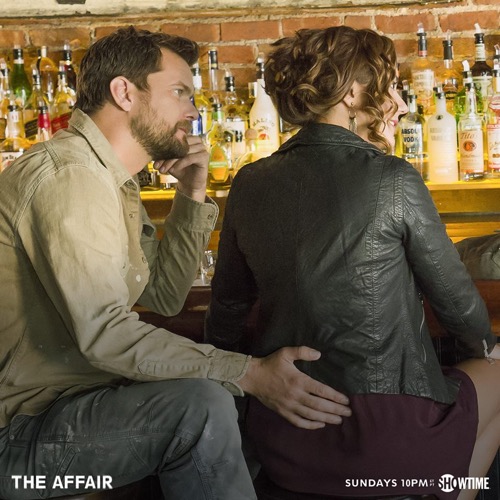 Tonight on Showtime, The Affair continues with an all new Sunday December 13, season 2 episode 11 and we have your weekly recap below. On tonight’s episode, a series of revelations rattle Noah (Dominic West) when he discovers Alison Lockhart (Ruth Wilson) has been keeping a secret.

The Affair explores the emotional effects of an extramarital relationship between Noah Solloway (Dominic West) and Alison Lockhart (Ruth Wilson) after the two meet in the resort town of Montauk on Long Island. Noah is a New York City schoolteacher and Williams College alum who has had one novel published and is struggling to write a second book.

On the last episode, Noah grappled with some essential questions. Meanwhile, Alison began to doubt a recent ambition, and renewed interactions with the Lockhart brothers force her to consider a harrowing possibility. Did you watch the last episode? If you missed it, we have a full and detailed recap right here for you.

On tonight’s episode as per the Showtime synopsis, “a series of revelations rattle Noah; Alison makes a momentous decision; Oscar Hodges has some troubling and dark opinions of Alison.”

Tonight’s episode is going to be an action packed one, which you won’t want to miss. So be sure to tune in for our live coverage of Showtimes’ The Affair Season 2 Episode 11— tonight at 10PM EST! In the meantime, sound off in the comments below, let us know how you have been enjoying this second season of The Affair and enjoy a sneak peek of tonight’s episode below.

The trial was doing more to the people surrounding Noah than to Noah himself.

Subsequently Noah’s book has been flying off the shelves since he’s been accused of manslaughter at best and murder at worst. And the fact Scotty Lockhart died the same way that Noah had once written about is just too good to be true for some. But it is

And while it’s making good Court TV, it’s also drudging up a lot of things that should have stayed hidden. Like Cole’s former life that is. Cole you see had turned his life around since the summer his marriage imploded and the summer he spent in a drugged out haze.

However that’s all behind him. He eventually made peace with Alison and had gone on to meet Luisa. A woman that was proving to be a grounding influence. And not only on Cole but on his whole family as well.

Cole has had some issues with his family in the past yet for Luisa he tried with them. Which was a lot better than ignoring them. Although Cherry couldn’t help putting down some conditions at first like how Cole shouldn’t judge them or Scotty for their behavior seeing as he had practically abandoned him when they needed him the most.

But mentioning that his brother needs rehab was how he chose to help his family and reassert himself as the eldest. Usually the eldest is in charge of looking after their younger siblings and, after Luisa, Cole returned to his family to fix it. And he didn’t stop with rehab. Cole also wanted to buy the Lobster Roll as way of regaining some independent income that could potentially help his family out in the long run.

So that’s what Cole did. He bought the Lobster Roll but with Alison’s help. It seems she still had some money from the sale of her house and pulling their resources meant they wouldn’t need a bank loan. Much less start off in debt to a bank.

Yet Scotty didn’t exactly like the idea of his brother going into business with Alison of all people. He tried to claim that she was manipulative and that Cole shouldn’t trust her but unfortunately he never got around to explaining himself. He had been such a mess that day that Cole managed to convince him to go to rehab and Scotty had simply fallen to asleep on the drive there.

And so Cole never heard the secret that was supposed to implode his life. Though Noah later heard something that rocked his world. He found out about Alison and Noah’s business adventure from an old face and that piece of news made him doubt everything about Alison.

Alison hadn’t told him that she dropped out of her post-graduate studies so Noah hadn’t known where she was for six weeks. Therefore he felt like he had been lied to and he was upset about the money he had wasted. And that’s why he went over to Max’s.

Max and Noah hadn’t even talked since the Hurricane party but Noah had needed a friend. However he found out the hard way that he and Max weren’t actually friends. Max had admitted to sleeping with Helen and somehow he tried to say that his life wasn’t fair because Helen hadn’t wanted him back. She had still wanted Noah.

So Noah had to tell him that the reason no one loves him is because he tries to use his money for everything. Including the “fifty-thousand dollar gift” he had made to Noah that had really been about paying off his friend so that he wouldn’t get mad about Helen. And so Noah and Max’s friendship looks like it’s over.

And as for Noah’s relationship with Alison, it hit a rough patch when all the lies and secrets had come out but the two did later walk into court together.

Only Noah’s case isn’t looking so good. Not only does the ADA have proof of bad blood between Noah and Scotty but Max showed up as a surprise witness for the prosecution. And he testified to seeing Noah wash off his car on the night in question.

So when asked if he investigated the issue, Max said yes. He went out and had seen blood all over the pavement from where Noah must have washed off his car.