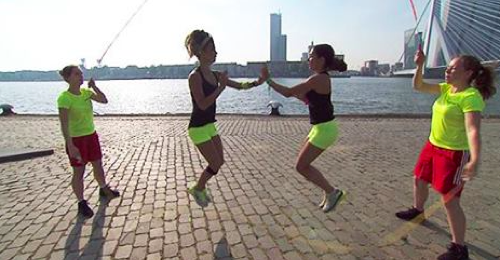 Tonight on CBS the Emmy award winning show The Amazing Race hosted by Phil Keoghan returns in an all new Friday November 6, season 27 episode 7 called Get in “Full Speed Ahead, Captain!,” and we have your weekly recap below. On tonight’s episode, the race continues in Rotterdam, Netherlands.

On the last episode teams traveled to Paris where Racers soared high above the French countryside and “dropped mics” with a popular French rapper.

On tonight’s episode as per the CBS synopsis, “the race continues in Rotterdam, Netherlands, where one team risks falling to the back of the pack when they stop to sightsee, and the pairs take a big jump when faced with a Double Dutch Detour.”

#AmazingRace begins with Denise and James completing their rap challenge finally and getting their clue even though they are solidly in last place. Justin and Diana scored a standing room only train and are way ahead of the others. The Texas boys have time to kill and check out the Eiffel Tower. Did one of the teams get on the wrong train? Cindy and Rick are talking about both Rotterdam and Amsterdam – two different places. Denise and James are thrilled to find out they are not out of the race.

Phil hands them the clue and says keep going and that the next leg starts right now. They run off. In Rotterdam, Justin and Diana get off the train and go looking for the red boat. They spot a note that says they can’t do anything until 5 am which will give the others a chance to catch up. Josh and Tanner now wonder if their sightseeing screwed them since they are now on the last train. They wonder why they made that stupid move.

The cheerleaders think they are in Germany. Last to show up are Denise and James. They will all sleep under the stars on the ship. Rick gets bitten on the lip by a mosquito and it’s all swollen. Justin and Diana get their next clue to take a water taxi to a village. Tiffany and Krista leave in 2nd and head out. Justin and Diana are running on one side of the bridge and the cheerleaders on the other. This starts an argument between Justin and Diana.

Cindy and Rick opt for a taxi instead of walking it. Kelsey and Joey leave in 4th and also get into a cab. The cheerleaders make it on the water taxi and ask them to shut the door but the boat pulls away. The cheerleaders are in 1st, Rick and Cindy are in 2nd and Justin and Diana in 3rd still bickering. The Texans are in 5th because they decided to sightsee in Paris. At the village, the #RoadBlock says they have to pick sunflowers. They have to look for an exact replica of Van Gogh’s famous sunflower painting amond the windmills.

Diana head back with one and so does a cheerleader. Diana is told she’s wrong. The vase was off. Rick jogs back for another look. Krista is told she’s wrong too. Logan and Chris are on the way to the water taxi. Joey decides to do the painting challenge. Rick comes back with a painting and Krista takes another look at the original. Rick is also wrong. Denise and James grab a cab to head to the water taxi. Krista gets it wrong on her second try. Diana runs back and is also wrong on her 2nd try.

Joey heads back as does Rick. Joey gets it on the first try. Kelsey and Joey have to use two Fitbit readings to calculate a number and bring that number of tulips to get their next clue. They head out with their tulips as the Texas guys show up. Rick gets it right on his second try. Krista heads back again and gets it right. That puts them in 3rd and Justin is fuming that they’ve lost their advantage. Tanner gets it wrong on his first try.

Logan does it for her team. Kelsey and Joey deliver their tulips and get their next clue to go to the Nolet Distillery where Ketel One vodka is made. Diana runs back with her painting. Cindy and Rick show up in second and head to Nolet also. The cheerleaders are close behind. Chris is yelling at Logan. Diana gets it on try #3 and they head out. Logan flops on her first try. Denise is doing it for the mom and son team. Tanner gets his and that puts them in 5th place.

Denise misses it on her first try as Justin and Diana get their clue – they’re in 4th. Tanner and Josh seem to be struggling with their Fitbit math. The reporters are at the distillery and get their clue for the #Detour. They can captain a ship through Rotterdam’s busy harbor using a training simulator that takes them through a storm and must be done fast. The other is skip – a double Dutch jump rope challenge that looks hard. Kelsey and Joey opt for ship.

Cindy and Rick also go for ship. Josh and Tanner head out in 5th. The cheerleaders decide to jump rope. Denise is on her 3rd try and gets it right. That puts them in 6th. Logan gets it right on her 4th try and they are in 7th place. Justin and Diana decide on the ship. Tanner and Josh decide on ship. Kelsey and Joey do the training exercise. One is a captain and one a navigator. Joey says Kelsey is a horrible driver so he won’t let her drive the boat. Justin and Diana are on the tram and the cheerleaders miss it.

Cindy and Rick are still at the bus stop and she’s mad that they’re just sitting there. He says her pessimistic attitude isn’t helping. The cheerleaders show up to jump rope. They are shown the hand clapping and jumping routine. Kelsey and Joey are on their third try at the ship simulator. Justin and Diana wait for their next try. Kelsey and Joey fail again. The cheerleaders start their jump rope try. They fail. Justin and Diana are on their simulation for the 2nd try. Cindy and Rick finally get off the tram.

They are at the tower. The cheerleaders pass the jump rope trial and get their clue which puts them in 1st place. They are told to head for The Hague via train. The Peace Palace is the pit stop. Justin and Diana succeed and get their clue which puts them in 2nd place. Kelsey and Joey are not happy. They are on try four while a couple of other teams do the training. Kelsey and Joey finally get it and they are in 3rd place. Josh and Tanner are in the ship simulator and are largely clueless. It’s like they did not pay attention in training because they aren’t looking at the radar screen as they should. Cindy and Rick are there but also fail. They are sent back to training.

Tanner and Josh finally get their ship challenge done and head out in 4th place. Logan and Chris try again and they also do it to land in 5th place. Denise and James now try again and they make it also which puts them in 6th place. Rick and Cindy are trying again. Tanner and Josh are the train station as are Logan and Chris. Cindy and Rick also clear the ship challenge and leave in last. Denise and James wonder if the other team will catch up to them. Sure enough, Cindy and Rick are there which means a foot race.

Phil says they are not the last team and they dance with joy that they’re in 6th place. Cindy and Rick show up a few minutes later. They are last and are eliminated from the race. That’s it for tonight.