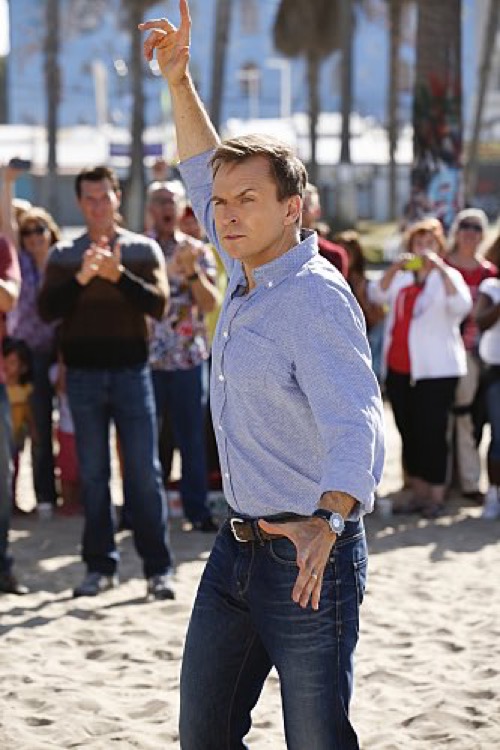 Tonight on CBS the Emmy award winning show The Amazing Race hosted by Phil Keoghan returns in an all new Friday September, season 27 premiere episode called Get in “A Little Too Much Beefcake (Rio de Janeiro).” On tonight’s episode, eleven teams begin Season 27 in Venice Beach, Cal., and then fly to Rio de Janeiro, where they immediately encounter a potentially game-changing Fast Forward.

On the episode everything was bigger in Texas, including THE AMAZING RACE season finale! With the $1 million dollar prize on the line, the final four teams race from Peru to Dallas, where they went to great heights at the top of AT&T Stadium, the home of the Dallas Cowboys, join a Texas cattle ranch and rappel 500 feet down the Reunion Tower. Did you watch the last episode? If you missed it, we have a full and detailed recap right here for you.

On tonight’s episode as per the CBS synopsis, “eleven new teams take off on the journey of a lifetime from Venice Beach, Calif. and head for Rio de Janeiro, where teams take a thrilling helicopter ride and face a huge decision at the Fast Forward.”

#AmazingRace27 starts in Venice Beach with the new competitors. Two of the competitors are mega-fans who made their own online version of Amazing Race. Two others suffer from drawfism. There’s also a pair of doctors, a pair of hot single guys, two dating news anchors, a mom and her gay son, two track star sisters, two paparazzi shutterbugs, and former NFL cheerleader BFFs. There are also two TMZ reporters known for the TMZ tv show.

Phil welcomes them along with an audience of Amazing Race fans and some former racers including season one winners. Phil reveals Rio is the first destination of the race. They have to catch a cab, then engage in a bike race that will win one team the sole ticket on the first flight to Rio with the others stuck on a flight leaving 30 minutes later. He also reveals the first leg team will score the only Express Pass of this season. They run for the cabs and head to another beach for the bike race.

Two male dancers support themselves as street dancers and are living in their car. At the beach, we see the bikes are pontoon bikes and the race will be on the water. One has to pedal and the other is the passenger. The two hot dudes take an early first and swap off to stay ahead but then get cut off when their chain breaks when they are bumped. Justin and Diana move into first – they’re the mega fans. They race to Phil and land the sole tickets to the first Rio flight.

Denise and James Earl, the mom and son are a close second. The other teams follow in short order. Tanner and Josh, the beefcake team land in last place due to their broken chain. Justin and Diana hope to use the 30 minute advantage to score the Express Pass. The TMZ girls think the gay guy and his mom are channeling Norman Bates and also mock the cheerleaders. The TMZ babes think you should worry less about looking good than doing good.

Once in Rio de Janeiro, teams have to sign up for a helicopter ride over the Brazilian city. The first flight was 20 minutes delayed and the second flight was five minutes early so their lead has evaporated. Justin and Diana got a Fast Forward and decide to risk it even though they are told it’s weather dependent. Some decide to take the FF and some do not. The helicopter tour ends with a Q&A about what they saw to get their clue. The #FastForward is a hang-gliding challenge.

The cheerleaders show up to the heliport in last place. Justin and Diana are at the hang-gliding place and are told they have to wait for the weather to better. The hang glider would take them straight to the pit stop but then the hang glider operators tell them the weather has worsened and they are shutting down for the day. Justin and Diana are crushed to find out they are now in last place for the helicopter rides and Justin breaks into tears at maybe blowing his shot at the game since he’s a mega-fan.

The first team lands and they are asked about the monument – Christ the Redeemer. Easy question and they get their clue. They now get a choice of detours – sand is beach volleyball and sidewalk is a giant slide puzzle that mimics the pattern of a famed walkway. Cindy and Rick change into their mandatory beach wear at the #Detour and start the slide puzzle. Denise and James, mother and son, show up soon and also chose the puzzle.

The paparazzi talk about how they’ve done helicopter flights over celebrity homes. Cousins Alex and Adam don’t like the chopper experience. Tanner and Josh, the beefcakes, choose beach volleyball. The track sisters also choose volleyball and remark that the rival beach volleyball players are tough competitors. James says he always did puzzles as a kid so he’s confident about the challenge. The doctors bicker over their slide puzzle.

Tanner and Josh get their points and their clue which puts them in first place to head to the pit stop. They are told the pit stop is within walking distance and head out. Jazmine and Danielle get their clue and Tanner and Josh worry if they should grab a cab in case a team behind them gets one. The girls have chosen a cab. Denise and James get their puzzle done and head out to the pit stop in third place. Justin and Diana are at the helicopter place and are in dead last.

Tanner and Josh run while the girls are in a cab. The guys ran it and made it their in first place. They win the Express Pass and Phil says they can skip any task before the end of the fifth leg and says that once they use it, they’ll award it to another team that must use it in the next leg. Those guys went from last to first. Jazmine and Danielle are thrilled with second place. The TMZ girls are struggling at volleyball. They give up and head to the puzzle.

The doctors get their puzzle done and head for the pit stop in fourth place. Ernest and Jin are in ninth place and Cindy and Rick get their official third place check in then Denise and James check in for an official fourth place. Kelly and Shevonne from TMZ argue about the puzzle. Cousins Alex and Adam decide to try volleyball and Ernest and Jin don’t like the short shorts and they are also trying volleyball.

Logan and Chris, the paparazzi are also playing ball and they get their clue to take fifth place. The cheerleaders are still on the way to the beach. Justin and Diana beg a cab driver to take a lower fee since they’re out of money. He agrees. The cheerleaders are booted from their cab very far from the correct location on the very long beach. Tiffany and Krista take off at a run to try and find the spot they need. Logan and Chris check in at fifth place.

Justin and Diana are happy to see other teams there when they get to the beach. Tiffany and Krista show up last to the beach and Kelsey and Joey give up and head to volleyball after the puzzle frustrates them. Alex and Adam finally get their sixth point and the clue and Ernest and Jin are surprised to see the little people beat them. The cheerleaders are struggling at the net and think it’s impossible. They decide to try the puzzle.

Alex and Adam check in for an official sixth place. Kelsey and Joey get their clue and head out. Justin and Diana try the volleyball after the puzzle perplexes them. Ernest and Jin get their last point and the clue. Ernest and Jin check in for seventh place and Kelsey and Joey take eighth. Justin and Diana rebound and get the clue that could check them in at ninth place. The cheerleaders and TMZ girls are both still at the puzzle and both teams are frustrated.

The cheerleaders complete the puzzle and head out as the TMZ girls lament that they can’t believe they are not as smart as cheerleaders. Shevonne and Kelly are still struggling with the puzzle as Tiffany and Krista check in for 10th place. The TMZ girls are at nearly four hours with the puzzle when they finally complete it and Phil has come to them since they never show up at the pit stop. The girls say that their TMZ staff are going to give them a hard time.

Shevonne says maybe this is a sign they should be nicer to the people they mock on the TMZ TV show and Kelly says “please.”