BY Amanda Austin on May 18, 2015 | Comments: one comment
Related : Reality TV, Recap, Television, The Bachelorette, TV 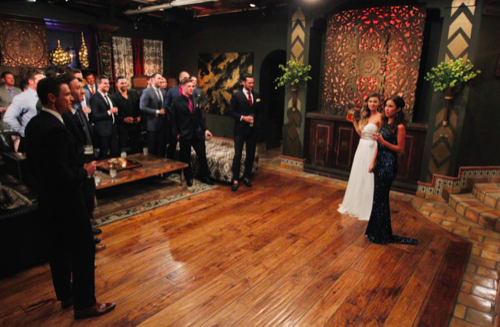 The Bachelorette‘s Britt Nilsson and Kaitlyn Bristowe airs tonight on ABC with an all new May 18 season 11 premiere episode. On tonight’s episode season 11 begins with two bachelorettes, Britt Nilsson and Kaitlyn Bristowe, welcoming 25 bachelors to the mansion. Later, the men vote to determine which one of the ladies remains and which one goes home. Part 1 of 2.

For those of you who don’t know, the Bachelorette, will kick off its 11th season with one of the biggest surprises of all: there will be two Bachelorettes greeting their suitors for the first time ever. The charming, charismatic beauty, Britt, who captivated Chris Soules and the rest of Bachelor Nation with a memorable hug on that first night at the Bachelor mansion, and Kaitlyn, the gorgeous, fun-loving, warm-hearted, but irreverent firecracker who let down her guard only to have her heart crushed will take their place in Bachelorette history. Who will the men prefer? Eventually, only one woman will be left to hand out the final rose.

On tonight’s episode, America fell in love with two very different but dynamic Bachelorettes last season – Britt Nilsson and Kaitlyn Bristowe. It was hard to choose between the beautiful, charming Britt and the gorgeous, fun-loving, wise cracking Kaitlyn. So now, 25 eligible bachelors will choose between these two amazing women. For the first time in franchise history there will be two Bachelorettes. Chris Soules sent both ladies home broken hearted, but now with another chance at love, both women are ready to take a journey they hope will wind up happily ever after.

Tonight’s season premiere of The Bachelorette kicks off with host Chris Harrison explaining that there are not one, but two Bachelorettes – Kaitlyn Bristowe and Britt Nilsson. Harrison explains that when they were interviewing the men that were coming on the show, they were torn between which woman they wanted to compete for. So, producers decided to let the men meet the women in person and decide which woman they think would be the best Bachelorette.

Britt and Kaitlyn get ready for opening night – and neither women are thrilled about the chance that they could be sent home. Britt desperately wants to find love and a husband, and she is scared the men will choose Kaitlyn over her and she will go home empty-handed again. While the two Bachelorettes are en route to the mansion to meet the 25 guys that will be competing for them, Chris Harrison shares a sneak peek clip of some of the guys that will be arriving: which includes a country music singer, a single dad of a 5 year old, a former runner who has injured in a hit-and-run accident, and even a male stripper.

Britt and Kaitlyn finally arrive at the mansion, and Chris Harrison greets them. They line up in front of the mansion and wait for the super awkward limo entrances which are even more awkward than usually because there are two women. The first limo arrives and Ben Higgins, a software salesman from Ohio climbs out, he makes a beeline to Kaitlyn and introduces himself. Afterwards he heads over to Britt and says hello. Up next is Jonathan, an automotive salesman from Detroit – he says hello to Britt first. Kaitlyn watches uncomfortably as Jonathan chats with Britt. Ryan and Clint arrive next – and they both go to Britt first too. Kaitlyn is starting to get disappointed because it seems like all of the guys are there to see Britt and not her. Jared arrives next and he also heads straight to Britt, he even shows her a superhero t-shirt that he is wearing under his suit.

Brady, a singer-songwriter arrives next, he jokes that he feels uncomfortable like he is at a middle school dance – and he heads over to Britt. Kaitlyn is devastated, she is considering leaving because she feels so awkward and she thinks that all of the guys are there for Britt. Ian arrives just in time and boosts Kaitlyn’s confidence, he gives her a hug and whispers that he is going to make sure she is the next Bachelorette. JJ arrives next and he says that he is a hockey player, he takes a puck out of his pocket and tells Kaitlyn that he would “love to puck her.” Ryan McDill arrives next and raves about how hot Kaitlyn is.

Up next is Joe, hailing from Kentucky – he brings Kaitlyn a jar of moonshine as a gift and they both take shots. Justin brigs a bouquet of balloon and even sucks out some of the helium and talks like a cartoon – Britt is starting to get upset because none of the guys have brought her gifts yet. A guy finally arrives with a gift for Britt – she is a little annoyed when she realizes her gift is a box of tissues, because she cried so much last season. Shawn Booth arrives next, and he opts for a “group hug” and hugs both girls at the same time. Britt is smitten with Shawn, and then he walks over to Kaitlyn and tells her that she is “the reason that he came here,” which is the last thing that Britt wanted to hear him say.

While they are waiting for the next limo to arrive – Kaitlyn says that she needs in a minute and runs inside to see the guys. Britt waits outside, and she is annoyed, she thinks that Kaitlyn is cheating and trying to get extra time with the guys. Britt decides to stay outside and “play fair,” she thinks that what Kaitlyn did by sneaking inside is super disrespectful. Tony arrives next, he gives Britt a speech about hoping “the universe provides love for him.” Britt thinks that Tony is super sweet, and then he turns around and says the exact same thing to Kaitlyn. Meanwhile inside the guys are getting rowdy, Ryan is wasted and has had a few too many drinks. When Shawn pulls up in a “hot tub car,” Ryan runs outside and starts shouting to him that “his car sucks!”

The limo entrances are finally over, Kaitlyn and Britt finally get to head inside to meet the 25 guys. Kaitlyn walks in and tells a corny knock-knock joke, Britt gives a speech about how serious she is about finding love on the show. Britt thinks that Kaitlyn telling a joke when she walks in just proves that she isn’t serious about finding a husband.

The drinks start flowing, and Ian grabs Kaitlyn and takes her outside so that they can talk privately. Ian reassures her that she is the reason that he joined the show. While Britt is getting to know some of the guys, the rest of them are inside arguing over which woman they should choose to be the next Bachelorette. Shawn reveals that he thinks he fell in love with Kaitlyn the moment that he seen her when he got outside of the limo. Tony sits down with Britt, he tells her that he originally joined to meet Kaitlyn – but after meeting Britt he has changed his mind and now he wants her to be the next Bachelorette.

Chris Harrison interrupts the cocktail party and announces that it is time for the guys to start voting for which woman they want to be the next Bachelorette. The voting room is open, each guy needs to go in to the room and put a rose in either Britt or Kaitlyn’s box. At the end, whichever woman has the most roses will be the next Bachelorette. Tony says he doesn’t even need to think about it – he heads straight in to the room and puts a rose in Britt’s box. After Chris Harrison makes his announcement, there is a mad dash – Kaitlyn and Britt are desperate to meet all of the guys so that they vote for them. Outside Kaitlyn sits down with Ben Higgins, and easily sways him to vote for her. JJ gets to know Britt, and although he was initially there for Kaitlyn, he tells her he is going to have to reassess who he is voting for because she is way more amazing than he thought.

Inside, Ryan McDill is making a complete fool of himself and he is ridiculously drunk. He starts shouting that he thinks they are on “gay Bachelor.” Shawn is still upset because Ryan ruined his limo entrance and said his hot tub car sucked. He takes Ryan aside and tries to talk to him – but Ryan doesn’t even remember it, but he tells Shawn that he does still suck, and walks off.

Britt Nilsson sits down with drunk Ryan outside, he is slobbering all over Britt and trying to kiss her and Johnathan comes to her rescue and convinces Ryan to go to the bar and give her a break. Ryan goes and finds Kaitlyn while she is talking to another guy and then he grabs her ass. Kaitlyn obviously feels uncomfortable. Ben takes Ryan aside and tells him that he is being disrespectful.

Ryan then proceeds to strip down to his underwear and goes swimming in the pool. Afterwards he heads in to the voting room in his underwear and starts throwing his rose at the wall and laughing at the pictures of Kaitlyn and Britt that are hanging on the wall. Finally one of the camera guys interrupts and tells Ryan he has to come outside and talk to Chris Harrison. Outside, Chris is obviously not impressed – he tells Ryan that he obviously didn’t come here looking for love and it is time for him to go home, Ryan agrees and Chris helps him in to the car.

The guys are all thrilled when they learn Chris sent home drunk Ryan. Britt sits down with Tanner, he came to meet Kaitlyn and isn’t a fan of Britt after watching her on Chris’s season. Britt realizes that his gift of tissues was actually him “being a d—k.” Chris heads in to the voting room and puts a rose in Kaitlyns box and votes for her to be the next Bachelorette. Outside Shawn gives Kaitlyn a picture that his nephew drew for her, he tells her that she is the only reason he joined the show. Brady and Britt are making a connection and discussing their faith and love for baseball games.

Chris Harrison interrupts the cocktail party and announces that all of the guys have voted – and he is going to go tally the votes. Britt, Kaitlyn, and the guys all sit down in awkward silences and wait to learn which one of them will be the next Bachelorette. Britt and Kaitlyn are both nervous wrecks, they can’t imagine leaving now after meeting all of the great guys there.