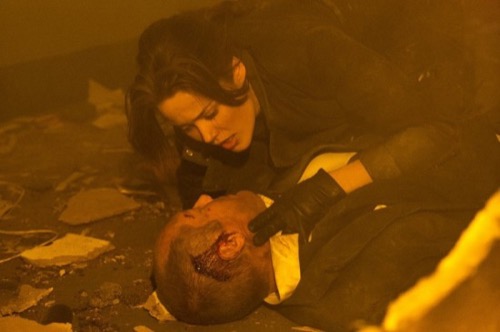 Tonight on NBC their criminal drama, The Blacklist starring James Spader continues with an all new Sunday February 1, season 2 episode 9 winter premiere called, “Luther Braxton.” On tonight’s episode, Part 1 of 2, the task force tries to save Red [James Spader] when he’s arrested and taken to a secret detention facility. At the facility, Red tangles with a thief [Ron Perlman] with whom he shares a complicated history.

On the last episode Red’s (James Spader) motives for Berlin (guest star Peter Stormare) took a sudden turn when he learned Berlin was manipulated by the latest Blacklister to avenge Red. Red and Berlin travel to Moscow to tracked down a high ranking Russian official who they believe was responsible. Meanwhile, Liz (Megan Boone) struggled to keep her secret from unraveling. Diego Klattenhoff, Harry Lennix, Amir Arison and Mozhan Marno also star. Did you watch the last episode? If you missed it, we have a full and detailed recap right here for you.

On tonight’s episode as per the NBC’s synopsis, “when the elusive Reddington (James Spader) is arrested and taken to a secret detention facility Liz (Megan Boone) and the task force set out to save Red before he disappears forever. Meanwhile, Red encounters Luther Braxton (guest star Ron Perlman) at the detention facility, a thief that he shares a complicated history with. Diego Klattenhoff, Harry Lennix, Amir Arison and Mozhan Marno also star. David Strathairn and Janel Maloney guest star.”

Tonight’s episode of The Black List kicks off with a national news report revealing that Red Reddington was just arrested in Hong Kong and is in US custody. A helicopter lands at a base in the Bering Sea and a man is escorted down the stairs with a black bag over his head.

Back at headquarters in the US Elizabeth, Harold and the rest of the team are panicking because Red has gone off the radar. The CIA is not cooperating and will not acknowledge that Red is their asset. Donald thinks that it is all a charade, and that Red wanted to be arrested because the charges are not his MO, Red would never get caught up in an assassination. They finally locate him and learn that he is at “The Factory,” it’s considered a “slaughterhouse for spies,” and it is where the CIA tortures people.

Red is chained up in a cell in the prison, he warns the guards that in 12 hours inmate Luther Todd Braxton will break out of his cell and when he does he will steal an envelope from them that will jeopardize national security. Red warns him that the plan is already in place and the entire prison will be over run and everyone that works there will be murdered by the inmates. Meanwhile, Luther is in another room being tortured, one of the guards slips him something and he swallows it.

Kim Goodson meets Harold Cooper at his office and says that she has come to work with him on Reddington, she says that she is aware that he is their asset. She explains to Harold that Red has tipped them off about Luther Braxton – Harold insists he has no idea how Braxton and Red know each other. Elizabeth runs a background check and learns that Luther is a burglar, has stolen over $3 Million in heists, and he is currently being held for stealing secrets from the Chinese.

In his cell Luther is using the wire that the guard slipped him to rig the door on his cell. A guard comes to let him out for dinner and when he puts his key in the door he is electrocuted, the room fills with smoke and all hell breaks loose. Luther wrestles the gun from another guard and begins opening all of the doors and freeing the prisoners. The swarm the prison and begin overpowering the guards.

Elizabeth, Donald, and Samar arrive at the prison and are rushed by the prisoners, Samar is shot in the leg. Elizabeth manages to get out of eye sight, but they take Donald and Samar down in to the torture chamber. They chain them up by their necks, and begin strangling them. Luther and his team of prisoners hull themselves up in the warden’s office, they make radio contact with Harold.

Elizabeth is sneaking through the hallways, and runs in to Red. She demands to know what he is up to. He explains that Luther is stealing “The Fulcrum,” a file full of the U.S. government’s secrets and information on a clandestine government society – if it goes public some of the most powerful men in the country will wind up in prison or executed. Elizabeth reveals that Donald and Samar have been taken hostage. Red tries to tell her to leave and reassures her that he will take care of them – but Elizabeth insists on staying with him.

Elizabeth and Red find a room of prisoners and employees who have hulled themselves up. They show Red and Liz blueprints of the prison, they have a plan. If they can get to the boiler room – they can reprogram it and overload the circuits – which will blow up the server room. Unfortunately, the only way to the boiler room is by crawling through a tiny duct – Liz is the only one who will fit through the duct. While they are making their plans, Luther realizes on the map of the building in the server room where Red and his friends are. He calls the phone, and is shocked to hear Red’s voice on the other side. Red and Luther already know each other – and they aren’t friends. They discuss what happened between them in Belgrade – Red accuses Luther of “butchering his pockets and killing innocent people.” Red warns Luther that he is not leaving the prison without the Fulcrum, but Luther taunts that he didn’t stop him in Belgrade and he can’t stop him now.

Luther calls Harold back and tells him that he wants the master code to the mainframe in the prison so that his team can access everything. Luther reveals that he has Samar and Donald and he has ten minutes to get the code or else they are dead. Aram begins panicking – but the CIA agents tell Harold that he can’t give Luther the code. They reveal that the code will allow Luther to get intel on the US government and all of their secrets. Luther calls Harold back and demands the code, and then he begins slowing breaking Samar’s neck. Harold rattles off the code and Luther lowers Samar’s noose.

Luther and his team take the code and head to the server room so that they canuse the password to access the intel. Meanwhile, Elizabeth is crawling through the vents to open the boiler room – she gets the door open and Red and his men head inside so that they can shut down the server room where Luther and his team are, they plan to blow up that part of the prison – but they are risking blowing up themselves as well. They have to turn up the pressure, and then wait for the broiler to explode. Red’s men abandon them because they think it is a suicide mission. Meanwhile, the head of the CIA has other plans – he orders an air strike no the entire prison – he would rather kill everyone including the federal agents than allow Luther to have the Fulcrum.

Luther’s men have half of the intel downloaded, and the air strike is within 24 minutes. Liz and Red and in the broiler room, they have overloaded it and now they are waiting for the explosion. Red confesses to Liz that the reason he wants to stop Luther is because he lied and told the CIA that he had the Fulcrum and that was the only reason he hadn’t been killed years ago. The clan descant society wont touch him because they think he has the Fulcrum. Red reveals to her that they have to stop Braxton because soon he will realize that he cant get the Fulcrum without Liz.”

Liz is baffled and doesn’t understand what Red means but before he can explain one of Luther’s men find the a shootout ensues in the broiler room, within seconds there is an explosion. The dust settles and Liz finds Red on the floor under some rubble – she begins doing CPR and screams at him to breathe. Two more of Luther’s men come in to investigate the explosion.

Red wakes up – and Liz is gone, Luther’s men took her. They drag her back to Luther and tell him that the server is gone, Liz blew it up, and they can’t get the Fulcrum. Liz announces to Luther that Red is dead. Meanwhile, Red is loading up a gun in another room and announces that he is going to get Red back. He takes a shotgun through the prison and starts making his way to the warden’s office to get Liz back from Luther. Luther and his men are preparing to board a helicopter and leave the prison.

Red gets to Liz and Luther and manages to take him down, Luther tells Red that he knows everything – he knows about the house, the fire, and the girl. Luther looks at Liz – and then tells Red “no wonder you came for her. She was there that night, she is the one.” Red yells at Liz to shoot Luther, and then the CIA’s air strike arrives and missiles begin hitting the prison.