BY Amanda Austin on May 7, 2015 | Comments: one comment
Related : Recap, Television, The Blacklist, TV 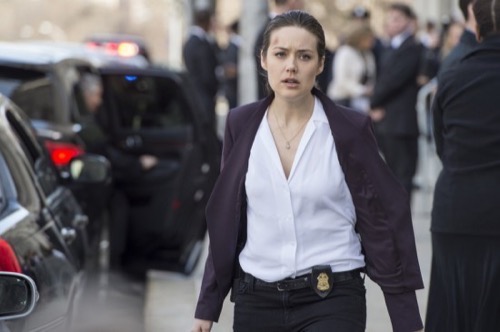 On the last episode as after decoding the information that was embedded in The Fulcrum, Red (James Spader) was determined to stop the imminent threat. Meanwhile, the task force discovered that deceased bodies of Chinese-American women are being smuggled out of the country under false identities. Liz (Megan Boone) continued to search for answers about her past after discovering a picture hidden in Red’s secret flat. Diego Klattenhoff, Ryan Eggold, Harry Lennix, Mozhan Marno and Amir Arison also star. David Strathairn guest stars. Did you watch the last episode? If you missed it, we have a full and detailed recap right here for you.

On tonight’s episode as per the NBC’s synopsis, “The FBI tracks a dangerous Russian assassin named Karakurt. Liz and Ressler gain insight on Karakurt by visiting Russian Counter-Intelligence, which also provides information about Liz’s mother. Meanwhile, Cooper falls into a compromising position.”

Tonight’s episode of The Blacklist kicks off with a college student walking across the quad – he pumps in to a man who asks him to sign a petition about the Patriot Act. After he signs the petition and hands him back the clipboard the student walks away – within a matter of seconds he drops his books and his hands begin shaking – he has a seizure and drops to the ground and begins bleeding out of his eyes. The man with the petition makes a phone call and says he was successful and it is time to “begin Phase 2.”

Tom Keen is sitting at a diner – Elizabeth joins him. She asks Tom to tell her about his boat, he ignores her and says that he needs to apologize for everything he did to her. Elizabeth is skeptical – she tells him that they can’t go back to playing house. Tom says that they should just hop on his boat and run away together – they both need to start over fresh. Elizabeth gets a phone call from Reddington and says she has to go – before she leaves Tom tells her to call him by his real name “Jacob.”

Elizabeth arrives at Red’s where he is torturing a Russian aid for information – he thinks the aid helped smuggle Karakurt in to America for the Kaball. Elizabeth doesn’t want to hear about it – she wants to know about her mother. She shouts that Red can’t just tell her she was born in another country and her mother was in the KGB and then drop it. Red talks over Liz and says that in a matter of days Karakurt is going to commit an act of terrorism on US soil and they need to stop him.

Elizabeth heads back to headquarters and briefs her team on Karakurt, the Kaball has brought the terrorist to the US to stage a terrorism attack and make the US government think that the Russians are responsible. Ressler and Elizabeth head to speak to the division of Russian counter-intelligence Kilpatrick, they don’t believe that Karakurt could be on the US soil, but they agree to ask around. They do get a tape of a conversation that was recorded by one of the Russian informants. Before Liz leaves she takes one of the men aside and asks them if they can’t get intel on Katarina – the name that Red gave her for her mother. He laughs and tells Liz that “Katarina Roskova” is a myth and she doesn’t really exist – but he agrees to ask around.

Back at Red’s the aid that is being tortured finally talks and gives Red an address for Karakurt – Red and Dembe head to the apartment but Karakurt is already gone. The neighbor says that she thinks that he moved – she saw him with a truck in the alley. Red snoops around and realizes that Karakurt has been working with ammonium explosives. He calls the truck’s description in to Liz’s team and they realize that it is parked right outside of the Russian intelligence office. As Liz and Ressler are leaving the office the truck explodes and Liz is thrown across the parking lot by the blast.

After the blast there are no survivors inside the Russian intel building – and all of their information is destroyed. Red calls Elizabeth to make sure she is okay – Liz rants that the Kaball is still three steps ahead of them and they have nothing on them, just a grainy surveillance photo of Karakurt parking the white truck. Meanwhile, Karakurt heads back to his apartment – his neighbor calls Red and tells him that the man he was looking for is back.

Just as Liz and her team are preparing to go to Karakurt’s apartment and bust him, O’Connolly arrives at the office and orders Harold to talk to him in his office. Connolly tells Harold to call his team and tell them to go to Union Station instead of the apartment or else his wife Charlene will pay the price. Harold argues that they can’t let Karakurt get away – but Connolly tells him he has to do just that or else. Harold obeys and calls Liz and Ressler and tells them that Red’s tip was wrong and they need to go to Union Station.

Liz and Ressler arrive at Union Station and begin scanning the crowds for Karakurt – Liz sees someone in a gray hood and tries to take him down – but the guy slams her in to the wall and makes a run for it. He gets away before Ressler arrives to assist her. They head back to the office and decide to work on their only lead – the tape they got from the Russian Intelligence office before it was blown up. They track down the Russian informant at a restaurant and get a name for a man working with Karakurt – Leo Dolpov. They rush to the address they find for Leo and find a lab full of explosives.

Meanwhile, Red sits down with Harold – he knows that he has been helping Tom Connolly. Red isn’t mad though that means they have an insider at the Kaball. He tells Harold that they can take down Connolly and the Kaball – he just needs to keep his eyes and ears open.

Liz tells Red that they need help translating the Russian notebooks that they found in Leo’s apartment so that they can figure out what Karaurt’s next target it. Red takes her to a lab and introduces her to a scientist named Lauren who will be able to figure out what Karakurt is planning from his notes. While she is in the lab Tom/Jacob calls her phone and leaves her a voicemail asking her to go out on a real date with him. Lauren informs Red and Liz that Karakurt was working on a super-virus, but it is genetically pioneered to only kill one person with a certain DNA – she can’t tell who the person is though. Liz realizes that it is the today of the ceremony honoring the CIA agents that were killed at the Russian Intelligence office – and every high-ranking government official will be there, one of those people must be Karakurt’s target with the virus.

Harold meets with Tom Connolly and tells him that he knows Senator Hawkins is the target and his people are at the ceremony and preparing to take down Karakurt. Harold asks Connolly to call off the hit, he says that the mission has been compromised – Connolly laughs that that isn’t necessary. At the ceremony Liz finally finds Senator Hawkins and tackles him as he is about to shake Karakurt’s hand. Liz and Ressler rush Hawkins to their car and prepare to take him to a safe house, but after they have drove a few seconds the Senator begins bleeding from his eyes. Liz screams at Ressler to drive to the hospital – she was too late, Hawkins was already infected.

Hawkins is in critical condition – and they don’t think he is going to make it. Back at the office Harold demands to know what happened – because Karakurt never actually touched Hawkins, Liz tackled him in time. Liz and Ressler head in to the interrogation room – they demand to know how he infected Hawkins without touching him.

Meanwhile, Red meets with Anton – the Russian informant that was giving information to the CIA. Red tells Anton that he knows he is an informant, Anton admits that he got a phone call from Elizabeth and she wants to know about Katarina. Red doesn’t want Anton to speak to Liz, and he offers to hire him as his own asset. Anton agrees and says that a few years ago two men from the justice department came to him and asked him about Katarina – they wanted to know about her daughter (Liz).

In the interrogation room Karakurt is denying working for the cabal, they test his blood and it comes back negative for the virus – he wasn’t the one that infected Hawkins. Red calls Liz and tells her to get out of the office ASAP, he tells her that the cabal knows her mom was a Russian spy, and she is the one that infected Hawkins. The cabal was setting Liz up this entire time, and they are coming to arrest her for Hawkins’ murder.