‘The Bold and the Beautiful’ Spoilers: Aly Driven to Breaking Point by Steffy, Darla Appears to Offer Advice 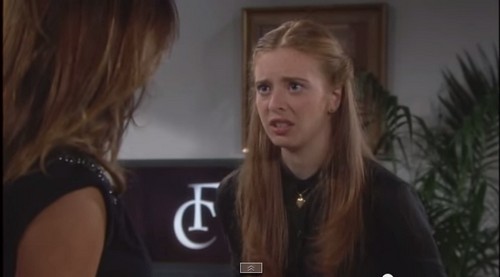 “The Bold and the Beautiful” spoilers for Wednesday, July 1, tease that Aly (Ashlyn Pearce) will be driven to her breaking point. Aly’s obsession with Ivy (Ashleigh Brewer) and Liam’s (Scott Clifton) relationship is spinning out of control. When you pair that with Steffy’s (Jacqueline MacInnes Wood) ability to push Aly’s buttons, it’s a dangerous combination.

Steffy and Aly will get into a heated argument over their mothers. It’s clear that Aly still holds a grudge for Taylor’s (Hunter Tylo) role in Darla’s (Schae Harrison) death. Longtime B&B viewers know that Taylor accidentally killed Darla in a hit-and-run accident. Aly will declare that she’ll remember what Taylor did every single time she looks at Steffy.

Of course, Steffy couldn’t care less what Aly has to say. Steffy will likely put this conversation behind her with ease, but Aly’s going to need some help to get past her struggles. “The Bold and the Beautiful” spoilers reveal that Darla will appear to Aly and offer some advice. Darla will urge Aly to keep things in perspective and change her behavior before it’s too late. Unfortunately, Darla’s guidance may not be enough to help Aly gain a new outlook. Aly’s father, Thorne (Winsor Harmon), will soon get updates on the problem and return home to see what he can do.

Meanwhile, Wyatt’s (Darin Brooks) admission could give Ivy hope for a future with Liam. We don’t know for sure what Wyatt will confess, but it will probably involve his continued pursuit of Steffy. Liam and Ivy are planning on getting an annulment, but that doesn’t mean their relationship is over. Even Steffy herself said she was OK with Liam taking some time to decide between the two of them. As long as Liam isn’t married to Ivy, Steffy seems to think she’ll win him over eventually.

Ivy is counting on Wyatt to steal Steffy away, but it’s going to be hard to pry her loose from her old flame. “The Bold and the Beautiful” rumors hint that Ivy’s relationship with Liam just isn’t meant to be. Liam will likely waffle a little more, but Steffy appears to be his endgame. Ivy may have no choice but to let Liam go. Stick with the CBS soap to see if the end of Ivy and Liam’s romance is near.

So B&B fans, what do you think about the news that Aly will have a chat with her mom? Will Darla offer Aly the guidance she needs or will she sink further into insanity? Will Wyatt’s admission give Ivy false hope or does she really have a chance with Liam? Let us know what you think in the comments below and don’t forget to check CDL tomorrow for the latest “Bold and the Beautiful” spoilers, rumors, updates and news.

Watch The Bold and the Beautiful video promo for Wednesday July 1, 2015 below