‘The Bold and the Beautiful’ Spoilers: Steffy’s Return Details – Ivy Lashes Out at Rick and Maya – Alcoholic Brooke Seeks Help 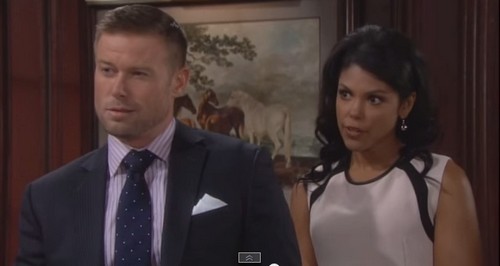 “The Bold and the Beautiful” spoilers for Wednesday, March 11, hint that love is in the air and change is in the wind. Quinn (Rena Sofer) will be giddy in anticipation of her marriage to Deacon (Sean Kanan). Quinn’s finally found the man of her dreams and she can’t wait to tie the knot. Deacon has admitted that he’s not perfect, but Quinn now has someone who can accept her craziness and that should count for something.

As Quinn tries to control her excitement, Brooke (Katherine Kelly Lang) will try to control her drinking. After knocking back a few with Wyatt (Darin Brooks), Brooke tripped and hit her head. Brooke’s drinking is getting dangerous and it looks like she’ll take the first step towards admitting it. The latest “Bold and the Beautiful” spoilers video shows Brooke expressing concern that she’s becoming an alcoholic. The rumors say that Brooke will enter a 12-step program to get her life back on track. Check out the Wednesday, March 11 episode to see Jill Whelan from “The Love Boat” play Brooke’s counselor.

Other “Bold and the Beautiful” spoilers for Wednesday, March 11, tease that Ivy (Ashleigh Brewer) will lash out at Rick (Jacob Young) for the way he’s been treating his employees, especially poor Aly. Ivy will really let Rick have it, but Maya (Karla Mosley) will stand by her man. However, Ivy’s main beef is with Rick and she won’t appreciate Maya inserting herself in the drama as usual.

Speaking of drama, B&B viewers can expect plenty of it when Steffy (Jacqueline MacInnes Wood) comes back from Paris. It looks like her return could come sooner than anyone expected. Jacqueline MacInnes Wood recently announced in a Facebook chat with fans that she would begin taping scenes in April. Jacqueline said she’d be around “for a much longer stay” this time. Stay tuned to “The Bold and the Beautiful” to see what will put Steffy back in the action.

So B&B fans, what do you think about Quinn’s visions of wedded bliss? Is Quinn going to jinx her marriage to Deacon before it even begins? What about Brooke’s attempt to get her act together? Will Ivy’s little talk with Rick really make a difference in his behavior? What about the news that Steffy is coming back? Are you glad Jacqueline MacInnes Wood will reprise her role? Let us know what you think in the comments below and don’t forget to check CDL tomorrow for the latest “Bold and the Beautiful” spoilers, rumors and news.