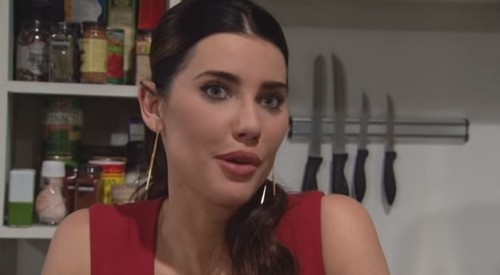 “The Bold and the Beautiful” spoilers for Friday, September 18, tease that Bill (Don Diamont) will let Wyatt (Darin Brooks) know he has no interest in being in the fashion business. For a while it looked like Bill was going to give Wyatt a shot, but it seems he just doesn’t have faith in the plan. It appears Liam (Scott Clifton) will once again get a victory at Wyatt’s expense.

Wyatt will feel a little disheartened by Bill’s news, but he’ll try to make peace with the fact that he’ll always come in second to Liam. Ivy’s (Ashleigh Brewer) encouragement and a pint of ice cream might help ease Wyatt’s pain. “The Bold and the Beautiful” spoilers say Ivy will acknowledge that Wyatt didn’t get the company expansion he wanted, but he definitely got the girl. Deep down, Wyatt probably knows he’s just getting more of Liam’s leftovers. Nevertheless, Ivy and Wyatt seem like a good match. Perhaps they can make it work in spite of the obstacles they’re facing.

Back at Forrester Creations, Steffy (Jacqueline MacInnes Wood) will try to defend her actions. After the confrontation with Bill and Katie (Heather Tom), Steffy is starting to fear that she could lose Liam’s support. “The Bold and the Beautiful” spoilers indicate that Steffy will explain why firing Ivy was her only option. Of course, Steffy likely has nothing to worry about. Liam has become Steffy’s “yes man” and he’ll undoubtedly back her up.

Meanwhile, Brooke (Katherine Kelly Lang) will get updates from Ridge (Thorsten Kaye) about his impromptu wedding. Now that Ridge and Caroline (Linsey Godfrey) have made their commitment, Brooke will believe Ridge should come clean about his vasectomy. Brooke will argue that it’s more important than ever. There’s a good chance Ridge won’t see things from Brooke’s point of view.

Ridge should probably listen to Brooke’s words of wisdom, but it’s really not her place to tell Ridge what he should or shouldn’t do. Unfortunately, that won’t stop Brooke from becoming a broken record on this issue. B&B rumors hint that Ridge may regret ignoring Brooke’s advice. In fact since Caroline doesn’t realize that Ridge is incapable of getting her pregnant, spoilers claim that when she does learn about her pregnancy she will happily tell her new hubby – of course we know that only Thomas could have impregnated the newlywed. Watch the sparks fly then! Stick with the CBS soap to see when Ridge’s secret will blow up.

So B&B fans, what do you think about Bill turning down Wyatt’s proposal? Will Wyatt take solace in knowing that he’s won Ivy over? Will Liam stand by Steffy no matter what? Is Ridge making a mistake? Let us know what you think in the comments below and don’t forget to check CDL often for the latest “Bold and the Beautiful” spoilers, rumors, updates and news.

The Bold and the Beautiful video preview for Friday, September 18