The Bold and the Beautiful (B&B) Spoilers: Is Caroline Pregnant by Thomas – Brooke Urges Ridge to Reveal Vasectomy 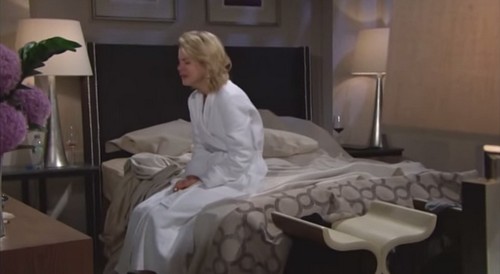 “The Bold and the Beautiful” spoilers for Wednesday, September 2, tease that Steffy (Jacqueline MacInnes Wood) will get fed up with all of Ivy’s (Ashleigh Brewer) demands. Steffy will complain to Wyatt (Darin Brooks) about Ivy thinking she can control everything just because she has the incriminating video. Ivy may have the upper hand, but that doesn’t mean Steffy will just give into every request. Steffy is tired of Ivy running the show and she’s about to make a few changes.

Of course, Steffy is playing a dangerous game by trying to go up against Ivy. This evidence could potentially lock Steffy up. That’s why Steffy will once again try to secure Wyatt’s help. If Steffy could just get that footage deleted, she feels like all her problems would be solved. Unfortunately, Wyatt may be in too deep with Ivy. They’re a team now and Wyatt is committed to helping Ivy get what she wants. Wyatt has his eye on some perks for himself as well.

Even if Steffy manages to get through to Wyatt, there’s no way Ivy is going to let them stop her. Down-the-road spoilers say Ivy will take precautions to make sure the video stays in her possession, no matter what her enemies might do. B&B rumors hint that the feud is far from over. We’ll see the drama kicked up a notch at Ivy’s upcoming photo shoot. Stick with “The Bold and the Beautiful” to find out if Steffy and Ivy will take their battle too far.

Meanwhile, Brooke (Katherine Kelly Lang) will urge Ridge (Thorsten Kaye) to tell Caroline (Linsey Godfrey) why he can’t have a child with her. Ridge will argue that he told Caroline what she needed to know. Ridge will insist that Caroline wants a family and he can’t give her that. Still, it might help Caroline understand Ridge’s point of view if she learned about his vasectomy.

At the hotel, Caroline will continue to wallow in her grief and will likely wonder what she’s done. Caroline popped a couple pills and downed plenty of wine. When Thomas (Pierson Fode) made his move, Caroline barely even knew what was going on. They shared a few kisses, but did something more happen? We’ll find out if Caroline ends up pregnant. Stay tuned to “The Bold and the Beautiful” to see if Caroline made a huge mistake.

So B&B fans, what do you think about the news that Steffy will want Wyatt on her side? Will Wyatt stand by Ivy? Will Ridge make some updates to view on having more children? Did things go too far with Thomas? Let us know what you think in the comments below and don’t forget to check CDL often for the latest “Bold and the Beautiful” spoilers, rumors, updates and news.

The Bold and the Beautiful video preview for Wednesday, September 2