The Bold and the Beautiful (B&B) Spoilers: Electrical Glitch Sparks Fire at Forrester Creations – Danger and Chaos Ahead! 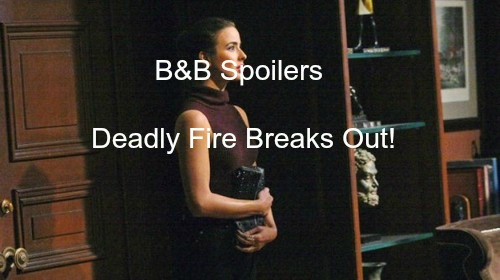 “The Bold and the Beautiful” (B&B) spoilers reveal that danger and chaos are on the way. B&B normally sticks to secrets, love triangles and pregnancy sagas. However, it looks like the show’s going to add a little excitement with a disaster. An electrical glitch will spark a fire in a storeroom at Forrester Creations.

There’s been a lot of buzz about the thrilling, fast-paced storylines on some of the other soaps. It’s time for “The Bold and the Beautiful” to get in on the action. A growing blaze could create several intense situations.

There’s a good chance that at least one character will need to be saved as the flames spread. Thomas (Pierson Fode) already protected Ivy (Ashleigh Brewer) when a light fell toward her at the Halloween party. Could Thomas come to Ivy’s rescue again?

Ivy has been torn between Thomas and Wyatt (Darin Brooks) recently, but she’s trying to stay loyal to her current boyfriend. Another heroic effort by Thomas could cause Ivy to change her mind. Of course, there’s always the possibility that they could get trapped together somewhere.

If Ivy thinks she’s facing death, she might confess that Thomas is the one she really wants. True feelings tend to come out when people fear the end is near.

We also have Caroline (Linsey Godfrey) and Nicole’s (Reign Edwards) babies to consider. If the building starts caving in or someone takes a tumble in an explosion, the lives of unborn children could be lost. Even some of your favorite characters could meet a devastating demise.

“The Bold and the Beautiful” writers proved they had guts when they killed off Aly (Ashlyn Pearce). They might be willing to kill or at least seriously injure someone else. You just never know what the future holds. Stay tuned to the CBS soap for updates on the flames ahead.

So B&B fans, what do you think about the news that a fire will break out at Forrester Creations? Could we see passionate moments and professions of love? Will everyone make it out of the blaze unscathed? Let us know what you think in the comments below and don’t forget to check CDL often for the latest “Bold and the Beautiful” spoilers, updates and news.