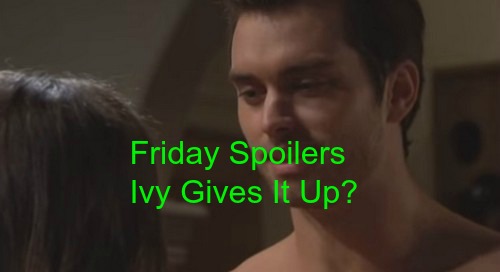 “The Bold and the Beautiful” spoilers for Friday, November 20, tease that a storm will roll in and it could leave Ivy (Ashleigh Brewer) feeling unsettled. Ivy has been delighted by all the attention Thomas keeps (Pierson Fode) throwing her way. However, Ivy thought it was best to thank Thomas for a lovely dinner and leave it at that. Unfortunately, Thomas isn’t quite ready to let the evening end.

Shirtless Thomas showed up in the kitchen after Ivy came down to get a glass of water. It appears Thomas is ready to make his final move. “The Bold and the Beautiful” spoilers say Thomas will suggest that he has some ideas on how to fill up the rest of their night.

Thomas will insist that there’s something better than sleep that Ivy could be doing across the hall. This is the moment of truth. Ivy will have to decide if she’s going to stay faithful to Wyatt (Darin Brooks) or partake with the flirty six-pack in front of her.

We don’t know for sure what Ivy will do, but next week’s spoilers indicate that Ivy won’t be able to keep her mind off Thomas. If Thomas doesn’t succeed this time, he could still have another shot. Ivy is becoming weak and that could lead to trouble.

Meanwhile, Quinn (Rena Sofer) will warn Wyatt about the kind of woman he’s dating. In fact, Quinn will hint that Wyatt’s current girlfriend is a lot like his former flame.

“The Bold and the Beautiful” spoilers say Quinn will imply that Ivy and Hope (Kim Matula) are very similar. Quinn has a pretty good point. If you’re looking for someone who was perpetually torn between two men, then look no further than Hope.

Liam (Scott Clifton) and Wyatt spent all their time fighting over their mutual object of affection. They’d both probably dump their girlfriends in a flash if Hope came back to Los Angeles.

Hope kept Liam and Wyatt dangling, but there was no real winner in the end. It seems Hope liked the idea of having two men at her beck and call. Perhaps Quinn will think Ivy enjoys the same thing. Nevertheless, Wyatt might have learned a valuable lesson from his war over Hope.

Will Wyatt really be willing to fight for another torn woman? B&B rumors suggest that Wyatt may choose to move on eventually. Stick with the CBS soap for updates on Wyatt’s love life.

So B&B fans, what do you think about the news that Thomas will try to get Ivy to sleep with him and she looks like she will? Will Ivy find herself in Thomas’ bedroom? What about Quinn’s comparison?

Do you believe Ivy is a lot like Hope? Let us know what you think in the comments below and don’t forget to check CDL often for the latest “Bold and the Beautiful” spoilers, rumors, updates and news.

The Bold and the Beautiful (B&B) Spoilers Video Promo for Friday, November 20